Couch to HM in 2 weeks! #FAIL : Correcting my Training Missteps

in Jeff Galloway - on Wednesday, November 21, 2012
About six weeks ago, I first started the Jeff Galloway Beginner Half Marathon training plan for the Princess.  I was attempting to follow it to the letter, but I began to get overly concerned about my (too slow) pace.  I decided I would ‘test’ my current HM time, by jogging/walking 13.1 miles one lovely Sunday afternoon.  DG, ever the supportive partner, said he would stay by my side the entire time.   The idea was to see how much faster I would need to get in the next four months.    (It made sense in my head at the time.)  But boy was that a dumb thing to do.  I hope it goes without saying that this ridiculous ‘time trial’ is NOT on the training plan, and nowhere does the esteemed Jeff Galloway recommend a new runner attempt such a bone-headed move.
Unfortunately, I followed some bad advice I read elsewhere about lengthening your stride, plus I forgot my knee sleeve, and I tried to ‘speed-walk’ when I wasn’t jogging.   At about 8.5 miles, I took a bathroom break, and DG said he was hungry.  We walked across the street to a restaurant and sat down.  I fully intended to get back and finish my 13.1 distance.  That never happened.  I stiffened up something awful during that meal.  I could barely walk the rest of the day.  And my knees and heels were in agony!  My knees, especially the left one, were wobbly and aching from the heel strike beating they took.  The plantar fasciitis was so bad I wanted to cry the next day at work. 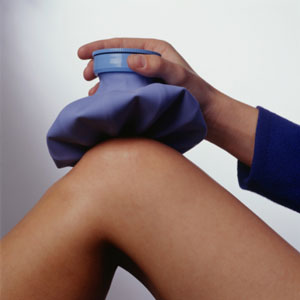 Fortunately, my annual checkup was the next morning.  My doctor made no attempt to discourage me from running, phew! and I asked for a physical therapy consult.  Three days later, I went to PT for the first time ever, into the very capable hands of Tallahassee Orthopedic & Sports Physical Therapy.   The diagnosis was weak hip flexors.   I got several exercises and stretches to do for homework before my follow-up appointment.   That same night, I stopped by my local library to pick up a knitting book, and decided to peruse the running section.  The offerings were very slim, but one called Chi Running caught my eye.  I raised an eyebrow at the promising words: ‘Injury-Free’ on the cover.  But I thought it was worth a look, and maybe this time I wouldn’t do anything as dumb as try to go from Couch to Half Marathon in two weeks!
This book was a revelation!  I gobbled it up in two evenings and decided to do a nice short trail run at an easy pace, applying some of the Form techniques.  I unplugged the headphones and set the Nike + Running app to silent.  Then I headed to a small state park nearby.  I had the MOST FUN! I explored the new-to-me trails, scrambled up hills, skipped over puddles, hurdled fallen trees, danced over the creek bridges, enjoyed the crunching of leaves and twigs underfoot, and breathed in the great smell of a forest on a crisp fall morning.  I actually spread my arms out and ran downhill with my eyes closed.  I ended the run by sprinting across an open field like I was crossing a finish line.  I had run a 5K distance before I knew it, and set a new PR!  I finally got that ‘Runner’s High’ I keep hearing about.  I was walking on air for the next several days. And I had NO PAIN anywhere!  My knee felt like it had never been hurt. 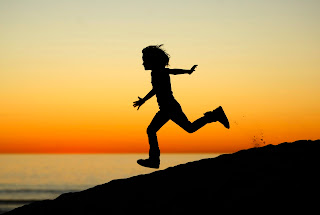 I’ve had some good runs and some not so good runs since that magical day on the trails of Lake Jackson Mounds Archaeological State Park.   But the Chi Running method is slowly but surely working for me.
The Bad: I have not gotten faster as I had hoped.  I still get plantar fasciitis pain when I first get up in the mornings and after long run days.  But that is my own fault for slacking off on the stretching and ice packs the physical therapist said I MUST do.
The Good:  While I am not faster, I have increased my distance - from 3 milers to 8 milers as of this date.  After every run, I know I did something right when my abs are sore. (This will make sense when you apply the techniques and run with your core, not your legs.) Once my exclusive domain, I’ve not been near a treadmill in over a month.    I’m learning to unplug the music, enjoy my surroundings, and spend more quality time with DisneyGroom exploring our local trails. And I’ve not needed that cursed knee sleeve, not even once!
After inhaling that library book, I’ve purchased my own copies of all three of  elite ultra runner Danny Dreyer ’s books: Chi Running, Chi Walking, and Chi Marathon.  I’ve read the first two cover to cover and am working my way through the third.  It does include extremely detailed training plans for Half and full Marathons. A review will be forthcoming on this blog.  In the meantime, check out chirunning.com for more information.
So to sum up: Do not attempt, under any circumstances, a Couch to Half Marathon in two weeks.
Tweet

I'm so glad you came across some good info! Chi Running is a great read. And I would try not to worry about your pace for your first half- just focusing on finishing and feeling good, and the speed will come with time.

Thank you! I do keep hearing that, so there must be truth to it. Am still nervous about time, but I'll just keep working at it. I enjoy your blog, BTW!