4am wakeup! Dressed, and headed to the Family 5K. I was not expecting a row of FOOD TRUCKS!  DG and I had each gobbled a bagel and a banana on the way so we didn't get breakfast there.
We found the Pacebook Running Club (#PbRC) and got a group photo.  They are a fun and very active online group - founded by fellow Tallahasseeans Tony Conticello and his wife, Stacey.  Check them out on Facebook.

The race began, and sadly, we didn't get a lot of character photos because it was still dark when we started.  In a way, it is a good thing to be in a later corral - the first corrals zip through the course in the dark and probably miss a lot of cool things and photo ops.

The first mile was through the parking area and backstage of EPCOT.  Mile 2 we entered the World Showcase by Mexico and we began to see all the characters.  We didn't stop at all of them  - but kind of went by which lines were moving.  Donald and Daisy are always on my list though!  I love the international flavor of the outfits they wore. 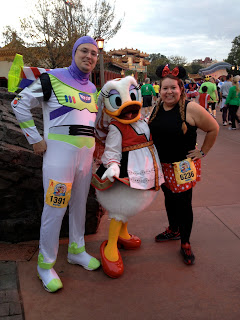 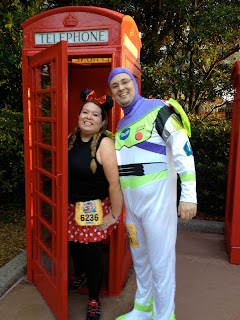 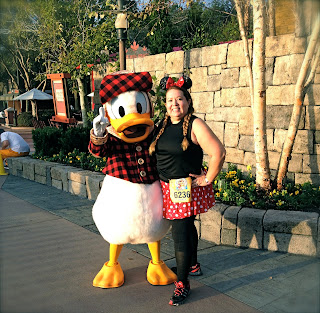 This guy wins for most original costume, I think.  A lot of runners stopped to take pictures with "Forrest Gump". He even brought his box of chocolates! 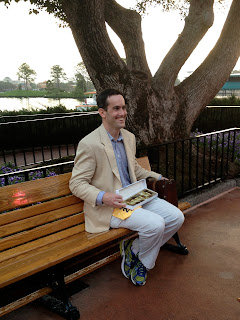 End of World Showcase, we loop around Spaceship Earth before completing Mile 3 and going back to parking lot to finish the race. 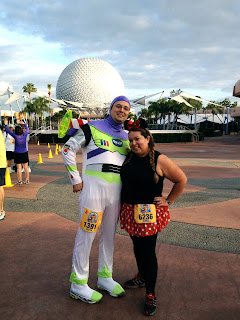 I was not at all prepared for what a hit my husband would be.  Everywhere runners wanted photos!  Castmembers yelled "To Infinity and Beyond".  DG is a social butterfly and really soaked up all the attention.  But wow - it was like being with a celebrity!  I was one of about 8000 Minnies, so no one paid me no never mind.

I did see two other Buzz Lightyears at the 5K.  One Buzz had this adorable "Jessie" for a wife.  She wore jeans and being from Maryland and unaccustomed to our Florida temps - regretted her costume a bit in the morning heat. 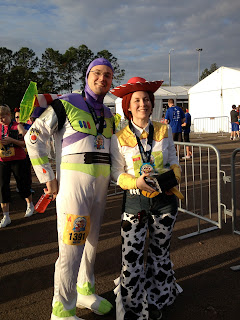 At the exit, we got our medals and began to search for Mickey and Minnie.  The line were super long pre-race so we didn't even try.  Post-race as it turns out - really short lines.  They were a bit hidden back at the start line - which was nowhere near the finish - but we eventually found them - got pix with our medals and were happy. 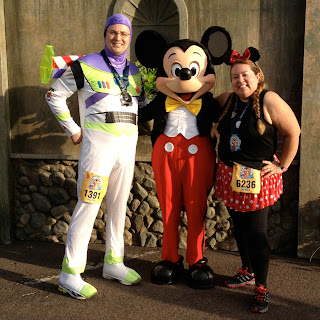 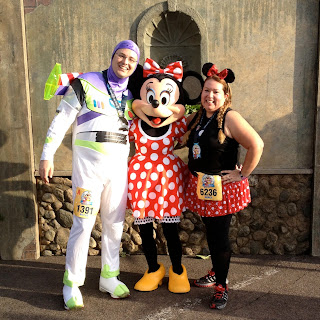 Back to our room for a shower and a nap - that ran a little long.

I still wanted to hit the EXPO, so we went.  We found out the runDisney New Balance has sold out by noon the day before.  They had only brought 1000 pairs... not expecting the fanaticism of Disney runners clearly.  Stock slated for the Tinkerbell Half expo had been overnighted and there was a massive line to get a pair of the hottest running shoe of the century!

I did a little more shopping and we started getting peckish.. Right before leaving though, we were passing the runDisney booth when DG went all fanboy on me.

This is the reason why. 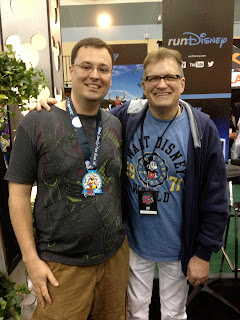 I had no idea DG was such a fan of Drew Carey.  Who knew?  Mr. Carey did seem like a really nice guy though.  Apparently he was there for several hours - seeking out volunteers and thanking them.  Very thoughtful.

We went off property. I'd spotted this Argentinian Steak House called "The Knife" near Downtown Disney.  I know DG really LOVES eating meat, but refrains around me, about 95% of the time.  So, because of that, I said we should go.  They had a cold buffet with salads and appetizers, they also brought out hot side dishes to your table, and the meat, you just went up this giant grill and told them what you want. I thought it was pretty reasonable: around $15 each.  To accommodate me, they grilled up a fish, and the kitchen brought our ceviche, shrimp salad, and cold mussels.  These are usually served at dinner - but they really bent over backwards to find something I was willing to eat. 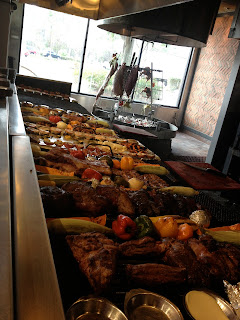 We ate and ate until there were noticeable Food Babies growing.

First stop: we went to the For the Love of Disney Running meetup at Beaches n Cream.  We enjoyed this place on our honeymoon, and hadn't been back yet - so we were looking forward to it.  Unfortunately, the lunch buffet was quite filling and we couldn't partake of the family size sundae, known as the Kitchen Sink.  Instead, we shared a Kid's Mouse sundae, shown here. 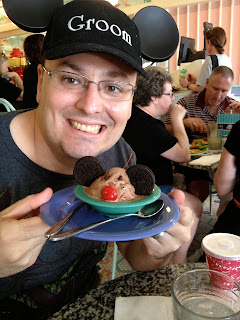 Run Disney staff members were there to talk to Erin of the For the Love of Disney Running blog.  Erin is SUCH a sweetheart by the way.  So nice, I hope I get to hang out with her again at Princess!  She is pictured below on the left, in the Minnie ears. The run Disney people also took a few photos of our little gang.  This one was featured on the runDisney Facebook page.  I had no idea we were so sunburned! eek!  My shirt was partially obscured, but reads "I run for Mickey Bars."  Which I thought was fitting to wear to an ice cream parlor.  But they didn't serve Mickey Bars here, only hand-dipped  ice cream.  I won that shirt in a giveaway by "Healthy Disney",  they can be found on Facebook. 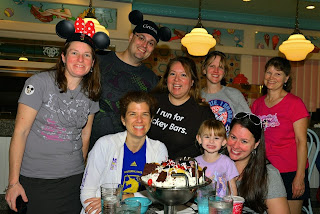 We then headed to the Endurance Sports Connection / Run Disney So I Can Eat Disney joint Meetup at the Yacht Club.  We were there a long time hanging out and catching up with friends we met at Wine & Dine weekend.  The swag bags once again - did not disappoint.  I don't have pics from the actual meetup.  The location was the Crewcup Lounge, and that place had very dim lighting.  I couldn't get a good shot of anything.  There were about 200 runners that came through the meetup though to grab a goodie bag and mingle with the other runners. 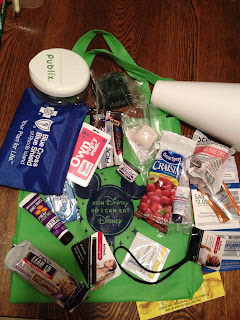 We attended one final meetup, just as it was winding down actually.  The Mickey Miles Podcast hosted a meetup in the Beach Club's Solarium.  My phone battery was dead at this point, and I put it in to charge while the meetup was going on, so I did not get any photos.  Hosts of the podcast: Mike Scopa and Michelle Scribner-MacLean were there. We met them both.  I've really enjoyed listening to that podcast.  Seems like I can never get enough runDisney news and conversation - so it is great having the podcast address all the topics that I love and questions from runners that I hadn't even thought of yet.  If you have not listened to them yet - check them out.  They have a Facebook page  and a twitter account where you can post questions about runDisney events.  And the podcast is available for free download through itunes here.  I had a question on a previous epidose asking about the Castaway Cay 5K, the free race offered by Disney Cruise Lines on the Disney private island.

By the time we left that meetup, it was dark, so we ended the evening by relaxing at Shipwreck Beach.  The Boardwalk area is great - and spending the afternoon at Yacht & Beach club brought back happy wedding day memories.  It was the scene of the crime, after all. 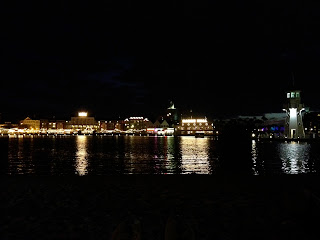 Next up: Day 3 - Volunteering at the Half Marathon!

Wow what another great day! I love when the characters dress up in the different costumes whether it's at Epcot or Animal Kingdom or MGM (yes, it'll always be MGM to me haha). Congrats on your race!

Congrats on the 5K finish!