in rundisney, runDisneyvolunteer - on Tuesday, January 22, 2013

1:45am wakeup.  That is not a typo.  Runners have to get up early - but many volunteers had to be up even earlier getting things ready.

We had our credentials from the Expo and instructions to be at the Volunteer Tent at Downtown Disney by 2:30. We were pretty worried about road closings, and we were staying off property. Luckily we got there in about 10 minutes. 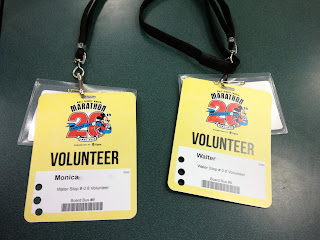 Our hotel is Maingate Lakeside Resort, if anyone is interested.  I've gotten incredibly economical rates there - and the location is on Irlo Bronson Hwy, just under two miles from the entrance to Magic Kingdom. We've stayed there a few times in the past year, and booked our stay there again for this weekend and Princess.  Using kayak.com, we've gotten rates as low as $35/night for a clean room with two double beds and a small fridge.  Whether we are on or off property - we never seem to use our room for much more than a place to shower and sleep.  So it is clean, it is close, and yay - it's cheap too.


We got to the volunteer tent, and scanned our badges in. We were given a sack lunch (it did not contain breakfast - but snacks - like granola, fruit, cookie, and chips).  Then based on our assignment location, we were directed to a bus, one of the many buses. We loaded on our bus and waited. We waited until about 3:15, and our Team Leader came aboard to give us instructions.

Everyone on our bus was headed to the 0.8 mile waterstop.  There were about 40 of us just at this one stop.  We got off the bus, and I noticed the bus parked.  Bus and driver actually waited for us the entire time we were out there working. Not gonna lie: It was hard work.  Tables were in stacks and broke off into pairs to begin to line them up on both sides on the road and set them up.  Then out came the cups set onto the table, eight deep, and 50 across.  You do the math.  Then each is filled partway with water.  Then we have large plastic sheets we set over the cups and do another level of 8 cups deep, 50 across,  then a THIRD level.  There were six powerade stations, and those were set up so that runners would arrive at those first.  Three on each side of the road.  Then the water tables -  24 of those - twelve on each side.

The first portapotty stop was right near us, so that was handy.  We were so close to the action, we could hear the onstage entertainment and all the Pre-race announcements.  At last it was time and the first wave of fireworks exploded into the early morning sky.

First came the wheelchair racers.  These athletes zoomed by incredibly fast.  One slowed down for a Powerade.  Most were racing chairs, but I saw a few standard type wheelchairs bringing up the rear.  Wow - that must be incredibly difficult. 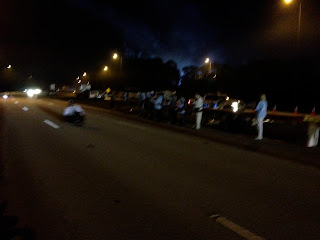 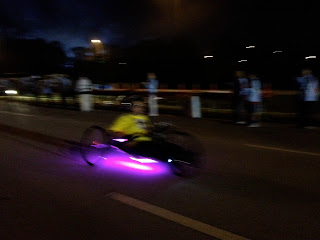 Immediately after the chairs, the elites came past - I didn't see any of these athletes stop for water or powerade.
And then - BOOM!  Like an explosion of people - we were hit with a giant non-stop wave of runners.  I was at the first table and when we ran out of cups, we were instructed to flip the table over and move down to the next table.  (This way runners won't see an empty table and panic that the water ran out.) We moved down at least three tables - and this was just on our side of the road.  We screamed ourselves hoarse - offering water and encouragement to wave after wave of people.

I couldn't stop for even a moment to take a photo.  I saw the most AMAZING costumes - I think my favorite was a guy dressed as Jafar.  It was spot on and elaborately detailed - he looked like he should be in an Aladdin stage show.  I can't imagine running in that huge turban - but he was doing it.

Across the median, in the opposite flow of traffic, the front runners began to whiz past and close in on the finish line, even before the last corral runners had reached our water station. 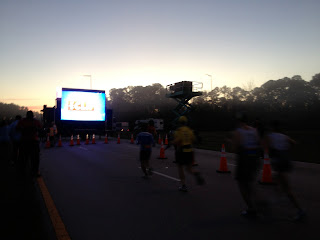 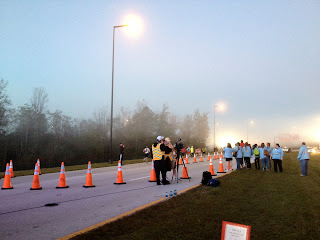 I am sad to say there were already about 30 runners behind the balloon ladies at this early stage.  And I prayed they would speed up and not be swept.  Immediately after the runners, came a dozen sweeper buses, looking ominous.

Then came workers in mesh bottom flatbed trucks.  It was interesting.  They picked up our tables  - water cups and all - and dumped them into the truck.  The water just poured out the bottom.  I was impressed by how efficient everything was - but I lamented all the wasted water. We must have poured thousands of bottles of Dasani that got unused.

Because it was dark earlier - we didn't get pics of our cool Volunteer jackets. Here they are for your enjoyment.  Each race has a different color jacket with logo for their volunteers.  5K was red, Half was pale blue, Full was yellow.  We were told we had to wear the jacket at all times we were on the course - for safety.  It made sense - there were reflective strips everywhere - and it was still dark when we finished working. But for those of us at waterstops the water resistant nylon served another purpose in keeping us dry. Poor DG had so much powerade and water splashed on him. Cups were flying everywhere. 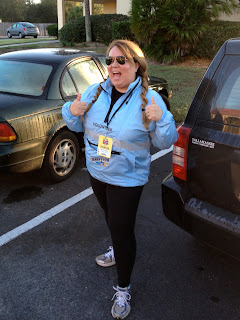 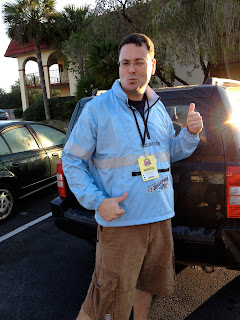 At the end of our shift, our bus took us back to Downtown Disney to the volunteer tent.  We scanned our badges again, and were given a One Day Park pass - woo hoo!  And that was it. We were done by 7:30am I think.  We went back to our hotel to take a well earned nap.

The rest of the day was pretty low-key.  We grabbed some lunch at Sweet Tomato and headed to the Pacebook Running Club's Dole Whip meet up at the Polynesian resort.  Parking was restricted - so DG dropped me off the Poly and parked at Magic Kingdom, then he walked over.  For those doing meetups at resorts - parking may sometimes be an issue.

In the Polynesian lobby, I spotted a beautiful Disney Fairy Tale Weddings bride having her portraits.  She had a tiara, a princess-worthy gown, and lovely cascading curls. Awww - Disney brides always get me choked up!  Always reminds me of how amazing my day was, and how I wish I could wear my gown again and again. 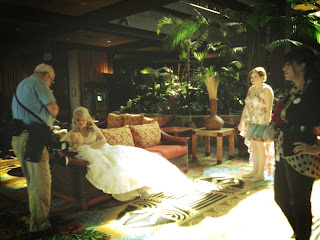 DG arrived at this, and it was off to the meetup - where this awaited me.  We hung out a little while, and I met Pam of We Run Disney.  I told her I had actually handed her a cup of water that morning.  She thanked me and kept running.  She had her 'game face on' and was in the zone for her Half marathon that morning.

I enjoyed my delicious Dole Whip and then we headed out.  We were going to Downtown Disney to shop a little. 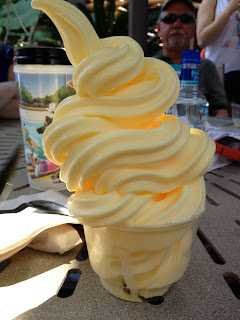 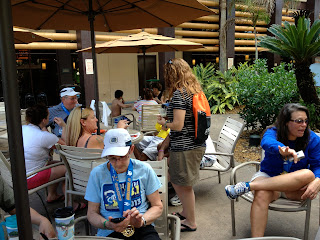 We headed to Downtown Disney, and we caught up with another meetup happening there: the St. Pete-based Digital Running Club.  I don't have pics of that event.  I had met one of the runners there the day before at Beaches and Cream, so we chitchatted about races and hung out a bit there too.

Then DG and I headed to the outlet malls for a bit of shopping.  And that was our day.

Excellent review of volunteering and thanks again for doing it :)!

Thank you for volunteering! I may have gotten water from you :) Disney volunteers are the best!

Thanks for volunteering! I kept my eye out for you but it was so hard to see and it felt like I was zipping past the water stop even though I slowed down. So interesting to hear what it is like from your perspective out there.

Love the volunteer jacket too!