in bacon, balloon lady, recap, rundisney, rundisneytv, sweepers - on Thursday, January 24, 2013
Sunday, the BIG day. The marathon day!  Woo hoo!  Even though we weren't running, DG was in absolute raptures over "BACON DAY!"  (Someday we should share with you how obsessed he is with bacon - and how everyone back home knows him as the 'bacon guy'. But I digress.) By now, many of you runDisneyers have heard tell of the infamous "Three Little Pigs" Challenge.  Well, it was every bit as glorious as you heard - I'd be willing to bet more so.

We awoke early and checked out of our hotel by 5:30am.  We expected to be at the tent until the marathon was over - so we would be unable to check out later that morning.  We loaded up the Jeep, dressed in our "Bacon attire" and made the 10 min drive over to the Beach Club.  We got there a few minutes before the "Pig Crew" and scoped out a spot to set up the tent, tables, and chairs.  Then began the set up of the dozens of bags of candy, chips, pretzels, chocolates, and drinks.  Water, gatorade, sodas, beer, margarita mix, chocolate milk, etc.  Signs, lists, the 'bacon wall' for signatures and photos, whew... lots to do.

The challenge is this:  Pre-registered runners stop at the tent. Eat three slices of bacon. Get an awesome medal.  Finish the last 1.5 miles of your marathon with fresh pep in your step, powered by bacon.

The bacon arrived.  It was donated by Indiana Kitchen Bacon and was prepared piping hot and crispy at one of the resort kitchens.  It was quickly loaded into individual baggies and cups for runners that wanted their Three Little Pigs "to go".  Non-meat eaters or those not trusting their tummies with bacon - had the option of eating candy or another snack instead of the three slices of bacon.  Either way - you had a snack and got your beautiful medal! 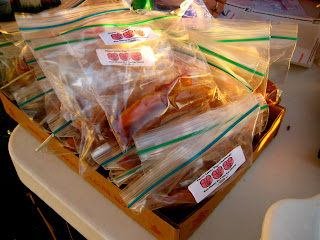 DisneyGroom shows off the bling - the highly coveted Three Little Pigs Challenge Inaugural Medal.  I say Inaugural, because this turned into a mega-hit and future challenges are forthcoming at other runDisney events.

Check out the Run Disney So I Can Eat Disney page on Facebook for info on upcoming food challenges at the 2013 Disneyland Half, and others as they develop.  I've proposed a Pirate themed medal for eating a Rum Cake (cupcake) at Princess next year, so I hope that one takes off.  Everyone wants a Pirate medal!!!  Think Gasparilla... but with Disney flair! 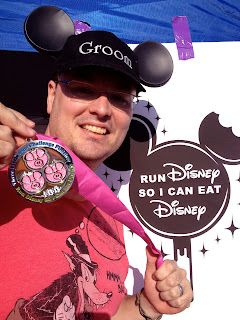 Here is some of the Pig Crew doing last minute set up and hanging out waiting for our runners. 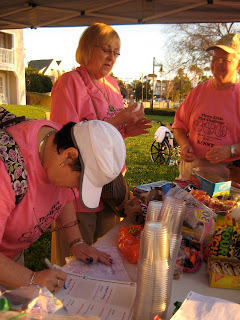 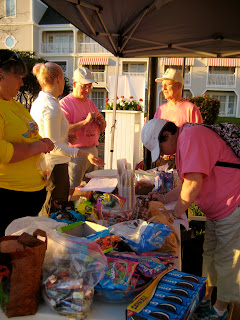 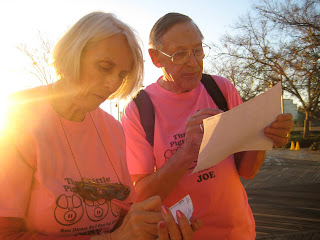 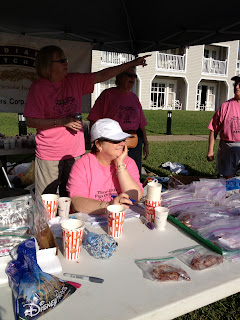 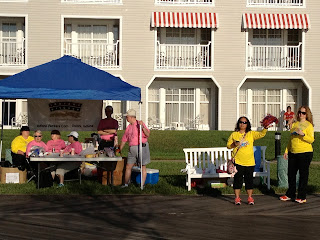 The sun is just coming up, but here at mile 24.5, here come the two leaders of the WDW Marathon, Adrian Bastos and Fredison Costa. These Brazilians were not bacon runners - so we just watched them fly by. 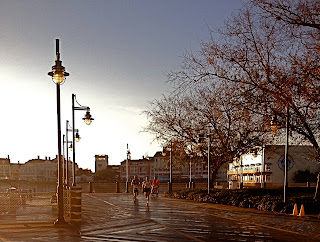 Here is a goofy pic of DG and myself.  In piggy attire.  If you look close (click to enlarge photo) - both are bacon-themed shirts by Disney.  They were not easy to find - so I was excited to get them for this day. 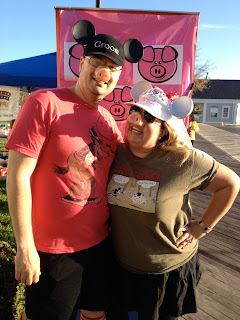 DG wanted to show off the Bacon socks I got him. 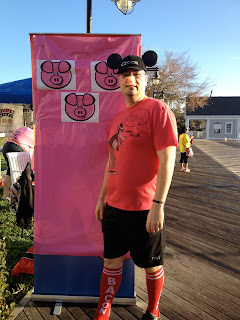 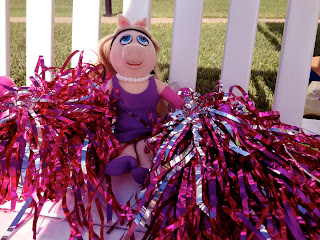 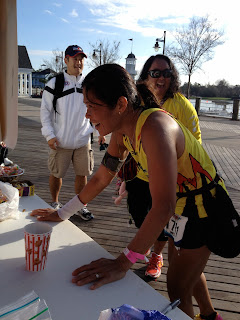 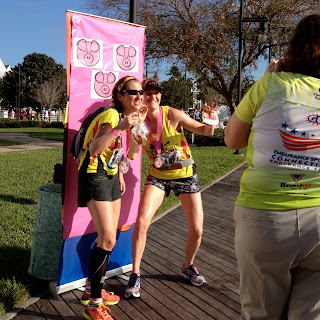 Bacon runners now began to arrive one after the other.  I couldn't get pics of them all - but we had another person at the tent taking photos and she posted several on the FB page.

Those of us designated cheerleaders would spot the identifying pink wristbands from a distance, and as soon as we saw one - we excitedly began yelling "BACON RUNNER - INCOMING!" to alert the table - clanging cowbells and waving pompoms.  The looks on the runners' faces was priceless.  Exhausted, overheated, thirsty, and hungry - they lit up completely when they saw the Bacon Tent.

Dennis Marsico of runDisneyTV came to our tent and hung out with the Pig Crew for over an hour. He was waiting for Linda, organizer of this challenge and founder of the RDSICED group, to interview her. 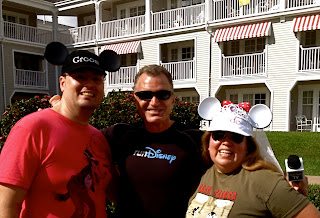 At last, Linda, with her pace group in tow - arrived, resplendent as Princess Leia. 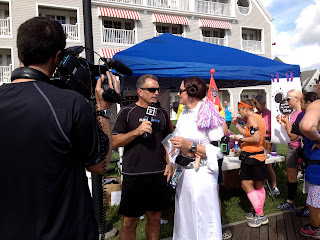 We also had some great runners in costume run past the tent.  They were not bacon runners - but probably will be next year! 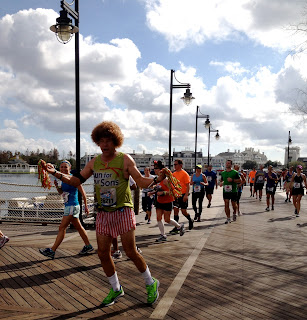 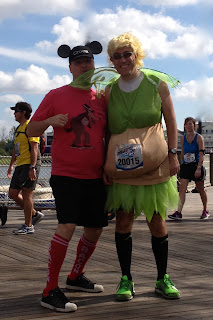 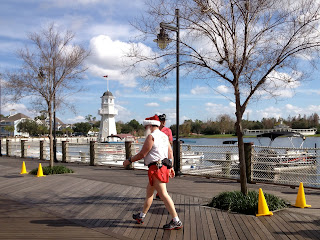 Now things are winding down...

A last glimpse of the scary 'balloon lady'.  (look closely on the left for the green mylar balloon) She is the one that keeps the 16 min/mile pace.  If you stay ahead of her, you are safe from sweepers. 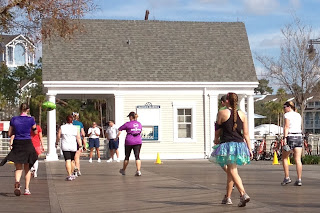 Several runners were behind the balloon lady.  Many were walking alongside the guys on bikes, the ones that tell you to get on the bus.  I hope that here at Mile 24.5 these folks were safe at last from sweeping.

Here is the very last of the sweepers. 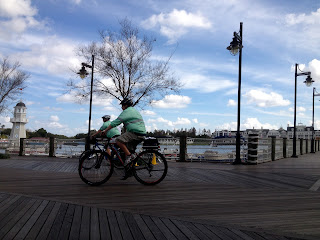 And with that - we began to pack up the tent.  I am super grateful to have been allowed to be a part of this terrific event.  We are so excited for upcoming events - and have been telling everyone about the BACON TENT at the Marathon!

We were almost ready to go, DG was just waiting for a bellman to load the last of the items, when who should come strolling along??? No entourage, no waiting in line for a photo, just him casually strolling along the nearly empty Boardwalk. The ONE runner I was most excited to see all weekend.  The one I had given up hope of spotting at all.  The worst part was I had been in the hot sun for eight hours! I was a disgusting mess.  AHHH!  Why couldn't I have looked cute for JOEY FATONE!!! He was so nice. I asked him if he was still cooking (referencing Celebrity Cook Off on Food Network) and he told me he is filming a new cooking show. I babbled on all kinds of fangirl nonsense, and DisneyGroom embarassed me by saying quite loudly "Hey watch where you put your hands on Joey" while taking a photo! ahh!!!! Still it was the icing on the cake of a great day! 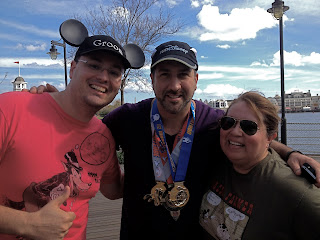 The Jeep was loaded and ready for our long drive back home, but we had one more stop.  We headed to Splitsville at Downtown Disney for a late lunch.  We had feasted on candy all day and needed real food.

Downtown Disney was ready to receive the runners for a big Marathon Weekend block party. 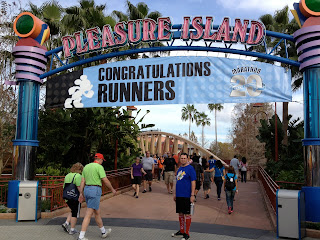 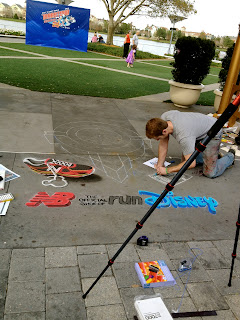 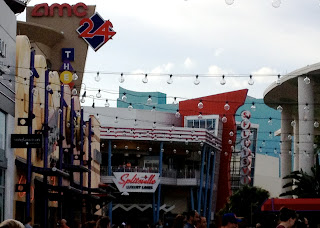 Logo of the super amazing group: Run Disney So I Can Eat Disney 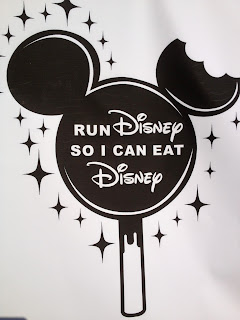 What a GREAT WEEKEND!
Thanks for reading my long recaps!
See you all at PRINCESS!

Sounds like you had a great day with lots of fun!

Great recap! It was great meeting up with everyone during the meet and greet and a pleasure to see everyone at the VIP tent at mile 24.5. The "Three Little Pigs Challenge" was a huge success thanks to Linda and her group of volunteers. The bacon was cooked perfect and the medal itself was the talk of Disney over the course of the following week. Seemed just about everyone had to stop me and ask what it was and how to get one. Already looking forward to 2014!

Leana, as far as I know - this was the first food challenge - but the plans are underway for more - with great medals. Thanks for saying Hi during the race when you passed the tent! :)

I am dying to do a running/food challenge - we really don't have any runs like this in Canada (at least that I know of!) Any idea if there might be one organized in time for the Princess this year??

I would love to do a running/food challenge - I don't know of any that exist in Canada (at least none near me!). Do you know if there might be one for this year's Princess? I am doing the Glass Slipper Challenge, and would definitely sign up!