Originally this event was on my radar for the Iron Girl Half Marathon also scheduled this day, and my plan was to convince my sister and mother to run the 5K as a mother/daughter team.  That way the three of us could make a girly day of it.  I was inspired by the very awesome running team over at We Run Disney.  But, my sister was unable to run this particular event, so I signed up for the 5K instead with my mother.  DG and I traveled to Tampa this weekend in particular to meet our newborn nephew - and happy coincidence I could also attend my first Iron Girl.

With her failing health issues, including early onset dementia, I may not get too many chances to run with my mother.  Plus, we are not 'close' really, so this mother/daughter team was important to us both.  To create a new and happy memory. 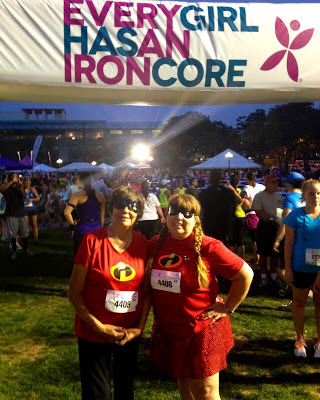 Because I love costumes, we dressed up.  For our team name, we went with: Las Increíbles!  (The Incredibles in Spanish)  Because I could not find tech tees with an Incredibles logo, I bought plain red tech tees from Target and made logos from black, orange, gold, and white duct tape. 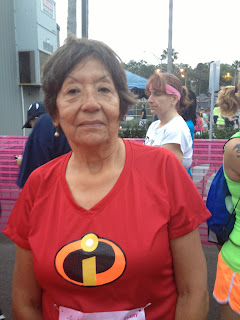 Unfortunately I could not get my mother into a sparkly running skirt.  She claimed 'that's not for ladies in their 70s'.  While I disagree, I didn't fight her.  If I am lucky enough to still be running in my 70s, I hope to still be rocking a sparkly skirt.


Things I liked:
Course: running over the causeway = spectacular views of Clearwater and the bay
Medal: made by the awesome Ashworth Awards, metal and stained glass, glittery and shiny. LOVE!
Venue - the waterfront park was a large open space. Perfect.
Stage - Made awards presentation easy for all to see and hear
Finish Line:  They announce YOUR NAME as your cross, just like at runDisney events. (They also announce your age.... fyi, in case that bothers anyone.)
Outdoor expo - very windy morning, but vendors catering to female runner made it a lot of fun!
PANCAKE breakfast - multiple grills onsite = freshly made pancakes with delicious toppings.
Super organized - things flowed smoothly and ran on time.  I didn't notice any hiccups.
There were many enthusiastic spectators/self-appointed cheerleaders throughout the course.
Husbands of runners pushing baby strollers, and following their wives alongside the 5K course .  This was just too cute. 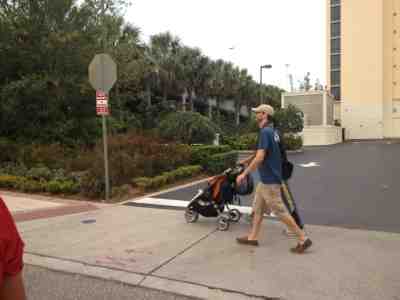 Super long portapotty lines.  There just weren't enough portapotties for this many women.
Parking.  An issue at nearly all downtown races.

The big surprise of the day was the conversation I had with my mother.  She told me she used to be a track and field athlete at her prep school: 200m and 400m events.  She told me about the jerseys, shoes, and bibs they wore - this was late 1950s.  I had never heard any of this before, so it was interesting to say the least, finding out she had been a runner.  She had not done any road races though, so this 5K was a first for her. I've mentioned this before: while my mother may be 70, she has the energy of a 10 year old boy on Christmas morning with a brand new bike and a pocketful of pixie sticks.  When race ended, she immediately asked me when we can do another. 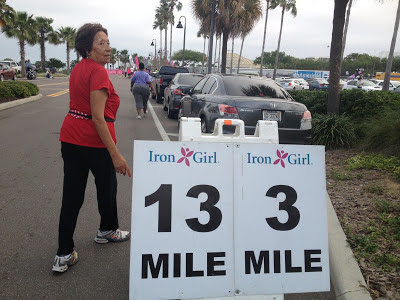 Thanks to my dashing DisneyGroom.  He followed us along much of the course, running ahead to get good photos, and cheering his heart out. Always the jokester, see the crazy sign he made, and the message he was yelling out to all the runners. At least no one took offense, that I know of.  To his credit, his other sign was actually pretty sweet.


The Mother/Daughter Team option was AMAZING.  Dozens of moms with little girls dressed in matching tutus.  And a middle-aged woman pushing her 80-something year old mother in a wheelchair brought tears to my eyes.  (Especially on those brutal causeways hills.)  There were even a few three generation teams! 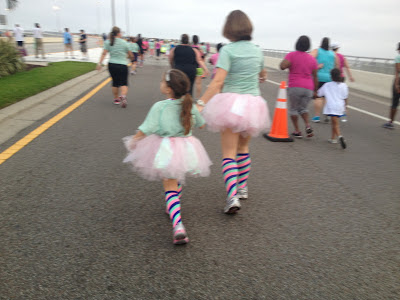 I would definitely do this race again!  I'd love to run or walk this with my sister. If you are reading this - hint hint - nudge nudge.

Happy Mother's Day to all moms, soon-to-be moms, and the 'forgotten' moms of angel babies.
Thanks for reading! 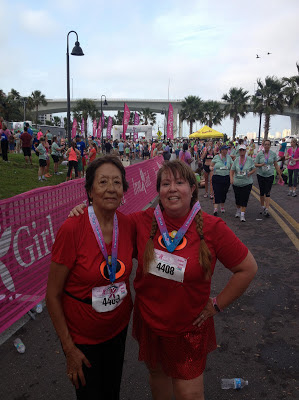