in recap, rundisney, runDisneyvolunteer - on Monday, May 06, 2013
A guest post by Elizabeth DeKam of disneymom.tumblr.com 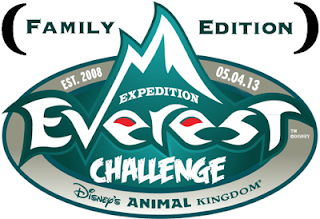 I started volunteering for runDisney races during Tower of Terror 10-miler weekend in 2012.  I found I enjoyed it so much, I’ve volunteered for the Walt Disney World Marathon Weekend and now Expedition Everest Challenge weekend.  This year, I volunteered at packet pick-up and the Family Edition of Expedition Everest.  It was definitely a LOT of fun.  Here’s my recap of the Family Edition.
Saturday morning, we had to report to the ESPN Wide World of Sports Complex by 8:30 a.m. and we were scheduled until 1 p.m.  Well, I’m obsessively early to EVERYTHING, so I was there before 7:30 a.m.  I had originally signed up for the Kids Races but because they were at the same time, they just assigned some to the Kids and some to Family Edition.  I got my volunteer shirt for the event, plus a pink sticker on my volunteer name badge that indicated I was doing the races.


The day before, I had met one of my fellow running buddies from a running group I’m part of on Facebook and we were both volunteering Saturday morning. So we ended up pairing up when they were handing out posts.  We ended up being stationed at the farthest clue from the start of the Family Edition, which meant people would hit us up first or last.  The race wasn’t scheduled to start til 10:30 and we were taken out to our location around 9:30, so we had an hour to just chill and talk.  When we got out to our location, there was a runDisney intern to give us our instructions.  We were given the answer sheet to the clue at our location and instructed that we could help people figure out the answer. But, we could NOT flat out give them the answer.  That seemed like one of those “Duh” moments because part of the fun is figuring out the clues on your own.  Our clue had boards all around the baseball field with two letters on each board.

So, after we were given the instructions and left to our own devices, we went and sat in the dugout.  It rained on and off all morning and got kinda chilly at some points, so I was glad I had brought along my volunteer jacket from the marathon during Marathon Weekend.  Otherwise, I would’ve been REALLY cold.  We continued to sit and talk until 10:30 when we realized what time it was and headed out onto the baseball field in order to help people.

A couple minutes after we headed out, the first families started streaming onto the field.  Most of them headed straight to the home plate to see all the boards at once, while others had their kids run from board to board and read the letters to them.  There were a couple families that had 5 or more members, but they were usually the ones who took the longest to figure out the clue.  It was fun to watch all these families when they finally figured out the clue, or if they came to us because they were just beyond lost and didn’t understand it at all. 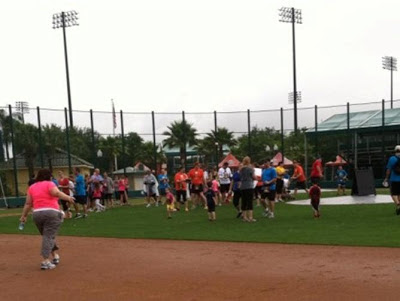 After about an hour and a half, the last two families left us.  They had teamed together to figure out the very last clue (that they didn’t even need to figure out what they had to do when they crossed the finish-line) and I ended up helping the parents figure it out while my friend distracted the kids.  Once they left us, we just kinda chilled and waited for our leaders to drive out and get us.  By 12:05 in the afternoon, we were done and headed out.  I headed home to get my son from the sitter then go home and take a nap because I was running Everest that night.
It seemed like the Family Edition ran very well and everyone I talked to that participated in it thought it was a lot of fun, and a great way for the family to spend some time together, and get some exercise, and use their thinking skills in the process.  I decided that if they have it again next year, my mom and I are going to do it, with my son, because she’s great at solving puzzles like that and the distance would be perfect for her.  I’m definitely going to keep volunteering at Disney races and next year, I’ll be volunteering during Everest weekend again!

Thanks so much Elizabeth for your guest post!
She did awesome at the Expedition Everest Challenge that night by the way... :o)