Before starting this race recap, a little history is needed.  It is April 2011, DisneyBride is still DisneyGirlfriend and we have been dating a little over a year.  DB enjoys 5Ks often and DG enjoys not running 5Ks at all.  DB keeps asking to sign us up for a race, trying to get me into racing.  I won’t run a 5K, because it has been entirely too long since I had done anything resembling running.  So DB signs us up for the Tails and Trails 1 mile fun run.  We walk the 1 mile and as we cross the finish line, they give us our first piece of “runner bling”.  It will be a year and a half until we do another race together.

This race benefits the Tallahassee Animal Shelter Foundation, supporting our local animal shelter.  The course also runs on one of my favorite trails. (If you are ever in Tallahassee I highly recommend all the trails within Tom Brown Park.)  The race organizers are genius about the packet pick-up.  Participants must walk through the kennels to get your bag, past the cats, kittens, birds, dogs, and puppies.  I had to leave DB in the Jeep or she would adopted and brought home every dog in the shelter.  I signed up for the 10K and DB signed up for the 5K.  We elected to pick up our packets on Friday night to avoid any crowds trying to get their stuff on Saturday morning.  Normally, I don’t like picking up my packet on race day.  Too much rushing around or waiting in lines before a race makes me anxious.

Like most local races, the 1 mile is run before the other races.  DB and I reminisced about how just two years ago we both ran the 1 mile together.  And since taking up running last year, in a relatively short time, we have completed a half marathon.  As the runners crossed the line, they were handed a medal similar to the ones we had received in 2011.  We were now really looking forward to receiving our medals later. 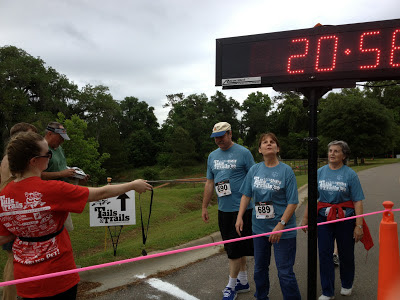 We also run into some friends and discuss our race strategies. 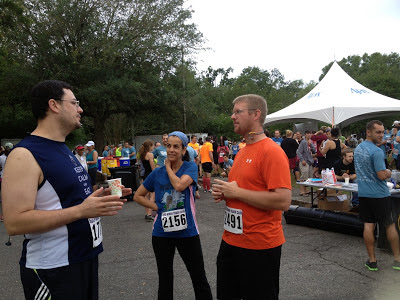 Start time approaches. DB and I line up, share a good luck kiss and we are off.  I may never get used to the lack of fireworks to signal the start.  RunDisney has really and truly spoiled us.  The weather is perfect for running.  I'm not sure who arranged the weather, but they should be retained by every Race Director.  It was nice and cool, with a glorious breeze, and the threat of rain.  I take off from the starting line and head out on the course.  The 5K and 10K split from each other after about a mile.  This split is where the course enters a wooded trail.  I truly enjoy trail running, it forces you to pay attention to every step.  Apparently, several runners forgot this as many people had bloody knees and arms at the finish line.

The race had water stops at two locations that you hit on the way out and the way back. Complaint Alert!  The water stop near the turn around point did not have any water on the way back.  Race Directors: Please ensure that water is available for all runners, not just those that are at the front of the pack.  There were many runners behind me as I continued on my way back to the finish line.  I hope the lack of water was not a major issue for any of the runners.  Fortunately, I know this trail system well, and I took a minor detour off the course to a nearby water fountain.  Those unfamiliar with this park most likely went without water until the finish. 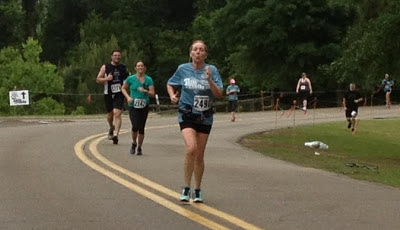 The final 3 miles were beautiful, by this time the crowds had thinned out and one could enjoy the run.  For about 10 minutes a very light shower helped keep things cool. I kept up with my intervals and begin to realize that I am running my fastest pace yet.  As I approach the finish line I see DB and a friend of mine waiting to cheer me to the finish line.  I finish the race in 1:07 and change.

I take my sub 11 min/mile time as a victory and grab a couple of slices of bagels.  After grabbing my bagel I realize they haven’t given anyone a medal.  I guess that the medals were always only for the 1 milers and I didn’t notice this last time.  Apparently, they assume only children run the 1 mile and that adults don’t want medals.  Anyway, I had been looking forward to adding more bling to our medal rack, but get over it pretty quickly.

The finish area was well stocked with water, Gatorade, bagels, fruit, Chobani, and other snacks - including Disney cookies.  DB was WAY too excited about that. 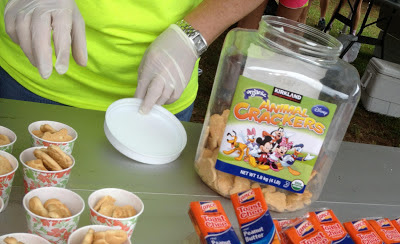 As a very nice touch that I have not experienced in any other local races, the race organizers waited until the last person crossed the finish line to give out the awards.  It was nice to be able to see people receive their respective awards. With my love of the Tom Brown Park trails, and DB’s love of animal charities, this is a race that we will do again.  Perhaps next time we will walk the 1 mile before the other races to add another Tails and Trails medal to our collection. 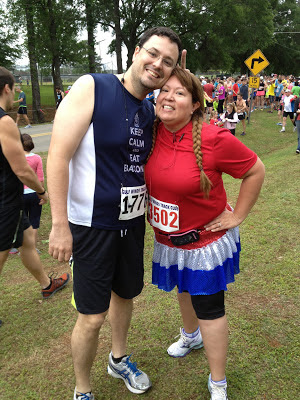