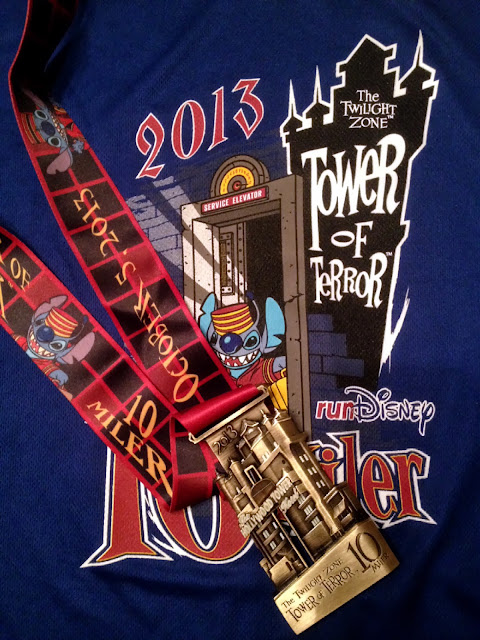 This past weekend I got to run the runDisney Tower of Terror 10 Miler.  I would not be traveling and running with DisneyGroom this time, but with a friend. Also, this was my first time running a night-time race.

Preparation started the same as any other race.  Costume and gear were laid out the day before.

We headed to the Expo on Saturday morning.  Even before entering the ESPN Wide World of Sports (WWoS) Complex, things felt very different from all of my previous runDisney weekends.

I had sought out some advice about how to prepare for a night race.  It was such simple advice, but surprisingly difficult to do.  I headed back to hotel to rest up for evening race.  I did my best to sleep and relax a few hours throughout the day, to be able to stay awake that night.  I had a large greek salad for lunch and walked near my hotel for a half hour or so.   It was a really beautiful day and it was very hard to not do more.  But I knew I would be glad of it later... and I was.

Finally time to get dressed.


There was no parking near the start line - so we had to park at ESPN WWoS Complex and take a shuttle over to Disney Hollywood Studios.  Fortunately there were a lot of buses and they kept taking off as soon as they were full.

We got to the Tent Village and mingled with the crowd. Unfortunately, we were about five minutes too late for Pre-Race photos with our online running friends.  So we missed those.

I had been too busy up to this point to get nervous but I started to get a bit anxious. My training miles over the summer had only gotten up to six or seven miles.  Flashback to my close encounter experience at the Princess Half Marathon... I began to worry about the sweepers.

We head to our corrals and begin to inch forward bit by bit.

And we're off!  I didn't get a lot of photos DURING the race, well, because it was dark.

Somewhere around Mile 6.5 the Balloon Ladies catch up to me.  For those that don't know - the Balloon Ladies are the 16 minute/mile pacers for the race.  They are two local runners that carry balloons and walk the various runDisney events.  What is so significant about the Balloon Ladies?  If you lag behind these pacers - then you are in danger of being swept.  So now I had to pick up the pace.

I was doing 30/30 intervals. (Translation: run 30 seconds, walk 30 seconds).  My interval timer kept going off and it was my reminder to stay on track.  Well, I was tired and slow - but my Pavlovian conditioning worked.  I continued my race. 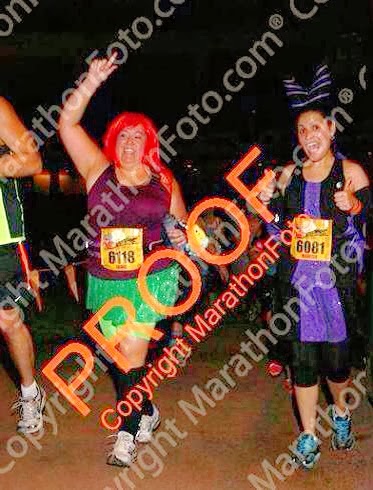 At last I crossed the finish and made it to the Villains Bash.  I was exhausted and there was a grassy area with many runners sprawled out.  I lay down a few minutes and stretched.  Then I got up, got a cold drink and was ready to enjoy the party... even if I had to shuffle like an old lady to do it.  I reunited with my friend and we even found a few more people to hang out with to ride the rides.

I missed my hubby on this trip so much.  But I had a great time that night and this was a terrific kick-off to the fall race season.

My thoughts on the race itself:

Just a few short months until Walt Disney World Marathon Weekend and our next runDisney event. In the meanwhile, we've got a couple fun races coming up this month.

Did you run the Tower of Terror 10 Miler this year? If so, what was your favorite part?
Have you ever run a night time race?

Looks like so much fun! I want to do this race one day! See ya in January for marathon weekend!

Wow! This sounds like one heck of a race. That's so cool that the park was open for you afterwards. I'm running the Wine and Dine Half in a month and am getting so excited! Great costume, too!

Thanks Katrina! I was really hot in the wig, but I managed to keep it on all night.

Mindy, I love your blog, hope I get to meet you finally in January.

You will have so much fun at Wine & Dine Weekend! I wish we could make it down again this year. Happy Belated Birthday!

Awesome recap! You did amazing, and looked beyond fabulous!!!! So sorry we did not get to meet up!

Beth, we keep missing each other, don't we? Are you running Space Coast? If not, I'll see you January for sure.

Great recap - just starting to get excited for the 2014 race. I really hope TSM has a low wait like that! I look forward to seeing you two again.