Day 2: 2013 Wine Dine Half Expo and our extended runDisney family

in Jeff Galloway, rundisney, runDisneyvolunteer, Wine Dine Half - on Wednesday, November 20, 2013
We began our runDisney adventures one year ago at the 2012 Wine and Dine weekend.   So even though we hadn't planned on coming this weekend, when we got into the official runDisney meetup (hope you read our last post!) - and then I found a really great hotel deal - we were thrilled when the trip just came together.


Magic always seems to happen for us where Disney is concerned.

The day before 'race day' we went to the Expo at ESPN Wide World of Sports.  It was bigger than Tower of Terror, but smaller than Princess and Marathon weekend expos.  The packet pickup was housed in a separate building in the complex.  This allowed for the Jostens Center to comfortably accommodate the vendors and a separate speakers area.

Unlike other big race weekends, I never saw any bottlenecks or long lines just to get into the building.  There were a lot of people - but nothing felt crowded, if that makes sense.   In fact, I saw no waiting in line at all for race shirt pickup and even the runDisney merchandise booth ran smoothly.  The event staff really listened to the runners and made some tweaks.  It worked! 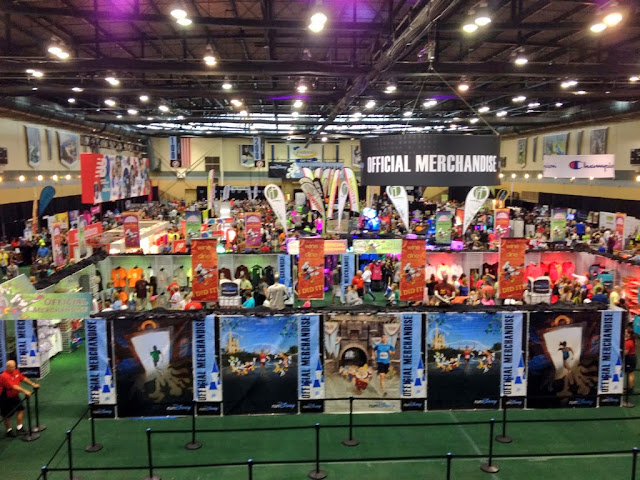 We found our friend, Elizabeth, a castmember, runner, and new blogger, volunteering at packet pickup. Love her! One of the sweetest young ladies I've ever met. 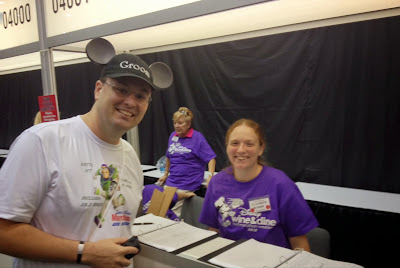 We also ran into Jim Stone and his family.  If the name sounds familiar, I mention him often on our facebook page.  He and his wife, Pat, have a running club, RunWithTheMouse.com.  Because they get bibs directly from runDisney, they are often able to get runners into races that are sold out on active.com.   They are super nice, they run, and they are big Disney nerds. Thumbs up on all counts. 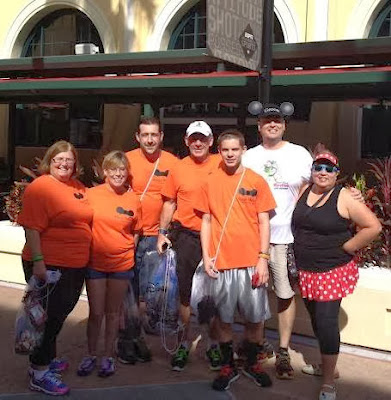 After bib pickup and a bit of shopping, we met up with Erin of For the Love of Disney Running. She is such a sweetheart and a huge Disney nerd.  The kind I aspire to be someday.  She was hosting a lunch for her blog and facebook followers. We all got some food and chatted.  We also got to hang out with the adorable Patty of Margaritas, Miles, and the Mouse.  Everywhere we were surrounded by infectious smiles, and enthusiasm to spare.  Erin had door prizes for her attendees and when the names went into the hat, I said I bet DisneyGroom will get the girliest prize.  Sure enough, his name was picked.  She put it back in the hat, and he was picked AGAIN!.

My handsome DisneyGroom won.... SPARKLE!  A Sparkle Athletic item of his choice.

I won a beautiful hand-numbered limited edition print from Lasting Memories. Erin really got some amazing prizes for her meetups!  She has pixie dust running through her veins. I'm sure of it.

We went down to the Sparkle Athletic booth to claim my... errr... I mean DisneyGroom's sparkly prize.  At the last minute, he sacrificed his prize for me. And I picked up another Tiara Visor. yay!


No expo visit is complete without stopping by to chat with Jeff Galloway.  DisneyGroom attended one of Jeff's retreat weekends earlier this year - and the two guys immediately began chatting away like old friends. 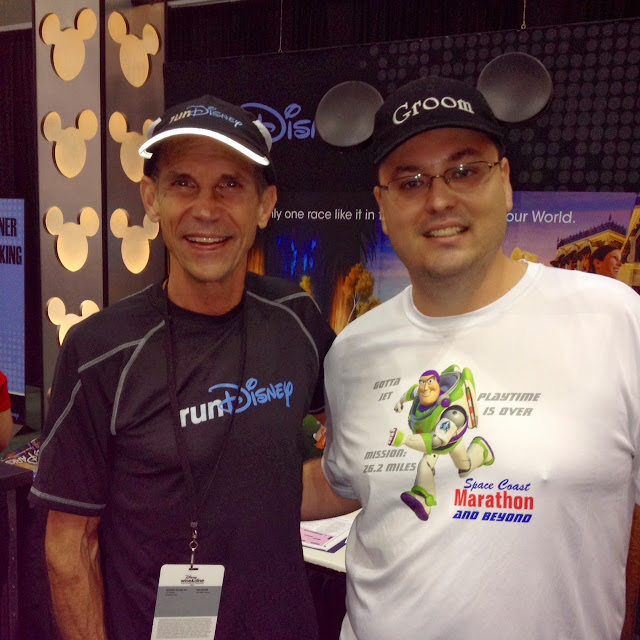 After the expo, we headed to the Polynesian to catch up with some friends from the Run Disney So I Can Eat Disney group.  These are the Bacon Challenge people - if you haven't already heard of them - please check them out.

Then, we stopped by the Team #runDisney Dole Whip meetup, also at the Polynesian.  We chatted with a few folks before heading to dinner with the Magic Milers group.  They hosted a pizza buffet set at Splitsville in Downtown Disney.  It was out on the balcony and the views were fantastic.

One of the best things about race weekends is catching up with friends. And we've made so many - at the races themselves and through social media. The runDisney weekends go by so quickly - but we manage to squeeze in so much fun by sharing it with our fellow runners.

We did some shopping at Downtown Disney and then called it a night early, in anticipation of that 4:30am wakeup.

I hope these types of posts interest you, dear reader.  Throughout the year we do product reviews/giveaways and race recaps in just one post.

But a runDisney race weekend is truly special. Each and every day is full of magic.

It is all the people I've mentioned, and the countless others I didn't, that make it even more special.  We look forward to seeing these familiar faces just as much as the races themselves.  As I go back and reread this, it seems like it is shout out after shout out - but our extended runDisney family means a lot to us.  It is one of the things that makes the Disney races so unique - the loyalty of the runners, so you get to see them again and again, a few times every year. 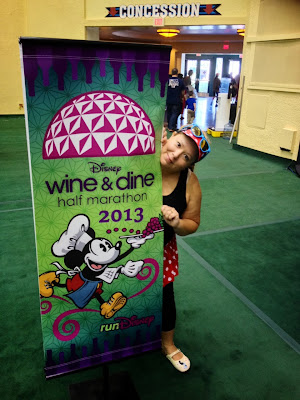 Stay tuned for my Day 3 recap featuring our race and a BLING-Tastic Giveaway!

Seriously so cool that you've met so many people through Disney Running!! I also have to agree with you about the expo - it was so well organized! Can't wait to read more about your weekend!

Thanks Meg. Disney races bring together all these amazing and fun-loving people. And the enthusiasm is contagious! I still can't get over No Lines for shirt pickups - they really did a good job. Crossing my fingers that Marathon weekend expo runs smoothly!