in buzz lightyear, costumes, dopey challenge, rundisney, runDisneyvolunteer, wdw half marathon, wdw marathon, wdw10K, wdw5k - on Monday, December 30, 2013
I'm hard at work on our costumes for runDisney's Walt Disney World Marathon Weekend that is coming up ... erm.. next week. (YIKES! NEXT WEEK ALREADY! Where did the time go?)  And where are my helper mice when I need them??? 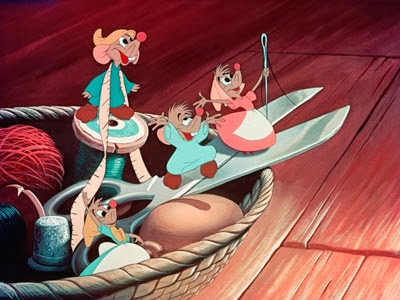 No photos of the costumes themselves to share yet. But here's a peek at the characters we've selected.

Let me tell you how every single conversation we have about costumes go:

DisneyBride:  So did you decide what you want to wear for  "insert race name here"?

DisneyGroom:  Ok, then I'll wear my Buzz costume from the Space Coast Marathon. 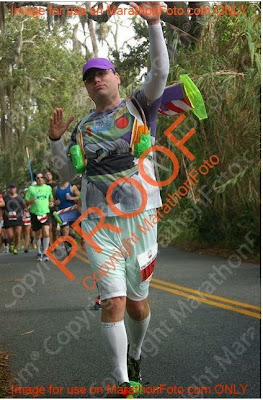 DisneyBride:  Hmm. That's a thought. (pause) Do you have any other ideas?

DisneyGroom: (thinks hard for a few minutes, then finally says:) I'll just wear a Buzz t-shirt with a pair of shorts.


So you see what I am working with here.  A man with a one-track mind and a burning desire to be a Space Ranger .


One who wore his Buzz spacesuit to a kid's birthday party.  Don't get me wrong. I love it. And I encourage it.  But with Dopey coming up, we needed more options.

And I am pleased to say he was willing to break out of his Space Ranger comfort zone.  He did want to sneak in a Buzz costume for marathon weekend, but then I reminded him of Glass Slipper Challenge + Royal Family 5K, Dumbo Double Dare, and also Wine & Dine.  So, don't worry.  I have no doubt, you will all see DisneyGroom in his spacesuit again.


This is what we came up with for next week's races.

Darth Vader, because he already has a helmet and cape, and the 5K distance would be all he could tolerate these.

WALL-E.  We thought it would be tricky to pull off, but so far it is not proving to be difficult.  Since we both really love the movie and DG's family and childhood friends all call him Wally, I think our 10K costumes are appropriate and meaningful.

Sam Eagle: DG is very patriotic and politically conservative.  In fact, we first met and became friends through conservative political circles.  Sam is a kindred spirit.  A group of friends from Run Disney So I Can Eat Disney is running the Half together, and they will be dressed in Muppet-themed costumes. This will be the most challenging costume to make, but it's coming along.

Mr. Incredible. Can't say that I blame him, but for 26.2 miles, he wants the most minimal costume possible.  No bells and whistles here. The simplicity fits the bill.  As does the name.  I'm so proud of my "Incredible, Dopey Space Ranger". 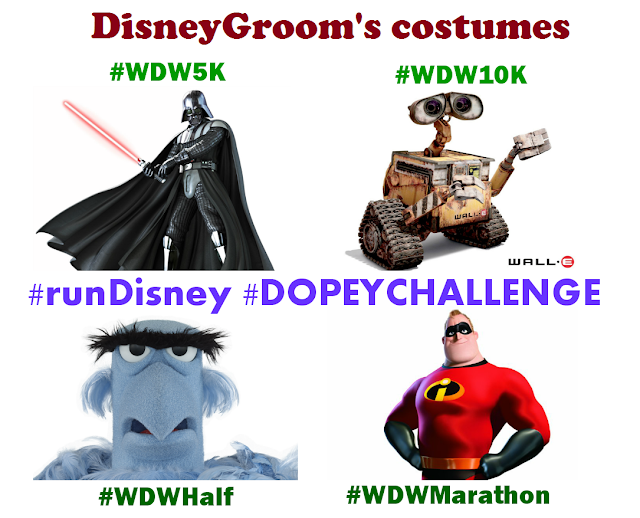 I will only be doing the Inaugural 10K, as I am also volunteering at the Half.  My other duties that weekend are to be DG's one woman chEAR squad for the 5K and Full.

WALL-E and EVE are one of those epic PIXAR romances.

Our love story has been no less epic.  Since I will only get to do one race with my DisneyGroom during that weekend, I wanted our costumes to be special. 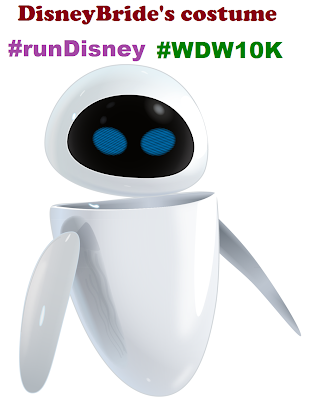 So there it is.  You'll see us next week in our completed running costumes.  For better or for worse, as I am still trying to make a few things work.

Are you dressing up?
How are you doing with your costumes?
Please share what you plan to wear at your next race!

I love the WALL-E costume ideas! So fun! I'm not running Disney, but I am going to do the Little Rock Half in March and it's super-hero/comic book themed, so I'm thinking about a costume for that race :)

I can't wait to see pics of your costumes, they are such cute ideas! Also, Mr. Incredible is perfect for the full seeing as though he'll be pulling off a pretty incredible feat doing the Dopey challenge!

Thanks Stacey. Lots of great choices out there for a super hero/comic book event. I'd probably do one of the X-Men, since those are my favorite movies.

Thanks Lauren. We've got a lot more races in 2014, so this Dopey Challenge was a good warm up for my sewing skills. ~DB

How cute!!! I can't wait to see how they turn out!

I love that DG always wants to be a Space Ranger. . that's amazing! But I love the WallE and Eve idea and can't wait to see it!