Space Coast Marathon recap: To the Finish Line and Beyond

in bacon, Jeff Galloway, recap - on Tuesday, December 10, 2013
Thanksgiving weekend was a whirlwind for DisneyBride and I.  We literally criss-crossed the state. First, Thanksgiving Day with my family in Cape Coral, Florida. Then, Black Friday with DB’s family in Tampa. Then, Saturday through Sunday, Cocoa Beach for the Space Coast Marathon.  Finally, back to 'the scene of the crime', Walt Disney World, for our anniversary.

I won’t review Thanksgiving, other than to mention we organized a color run for our nieces.  It was enjoyed by (almost) everyone.   Now to the race.

After driving clear across the state on Saturday we arrived at the Kennedy Space Center.   I dropped off DB and headed to find a parking space.  The location for packet pick-up makes perfect sense for the world's only space themed marathon.  Some signage would have been helpful to let the runners know to pick up limited access tickets before waiting in the security line.  I saw the table by luck, however, DB and many other runners were surprised to find out after waiting in  the security line that they needed the tickets to enter. 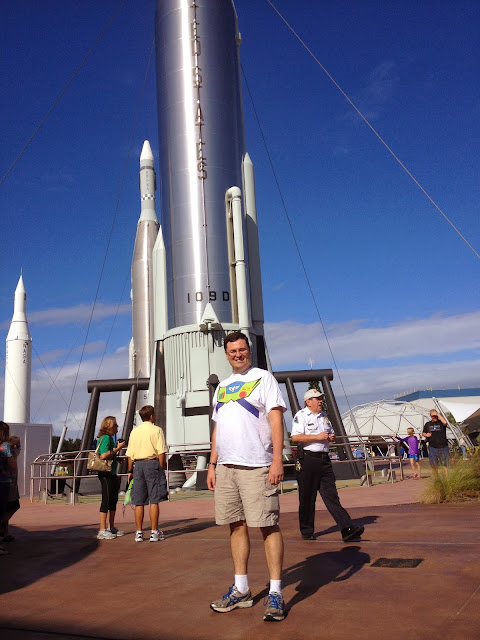 Once in the convention center, the pick-up location for bib and bag check bag are right up front.  I didn’t see the volunteers out front giving out your bib number.  Thankfully, the volunteer took a few seconds to look us up. 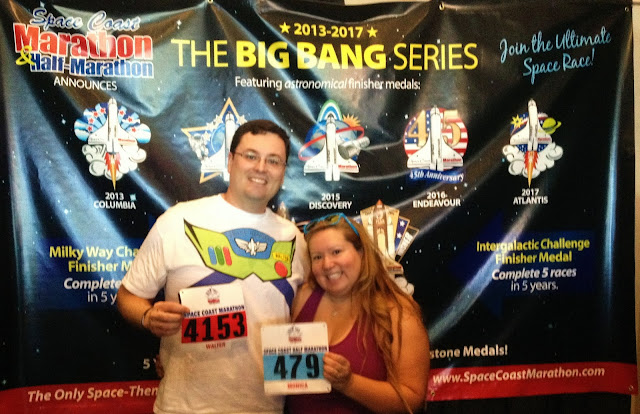 With my bib in hand, we headed for our shirts and moon pies.  Yep, moon pie.  Ok, I grabbed a couple.  They are delicious.

The expo was much smaller than I had expected.  I realize that this has historically been a local race.  But, they have been advertising this race across the country so I had expected more in the way of retailers.  There were a few representatives from other Florida races.  I was lucky enough to win the giveaway for a free race entry to a new race: Excalibur 10 miler.  And I got a look at the big display case with the entire Big Bang Series medals. 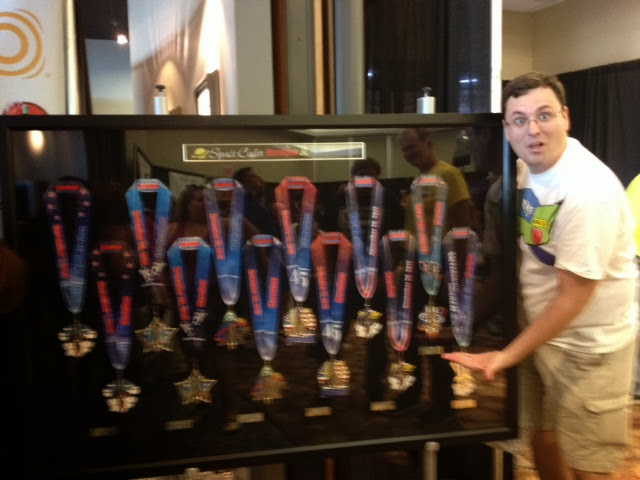 My love of bacon is no secret.  So, it should be no surprise that I participated in the Endurance Sports Connection Three Little Pigs Challenge.  DB and I went to the meetup to pick up my swag and to get a better idea of where the tent would be on race day.  Why yes, that is a Bacon Suit shirt. Thanks for asking. 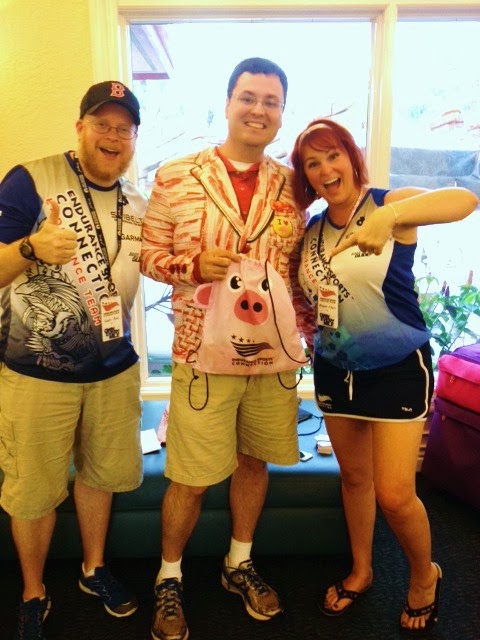 I must say that I am a little bummed the 3 Little Pigs medals will be mailed out late December and were not available race day. (We were told this ahead of time; it was not a surprise).

Waking up early on race mornings is never fun.  Fortunately, we had the room packed up and our race clothes laid out the night before.  DB does this whole Flat Monica and Flat Walt thing to figure out if we are missing anything. 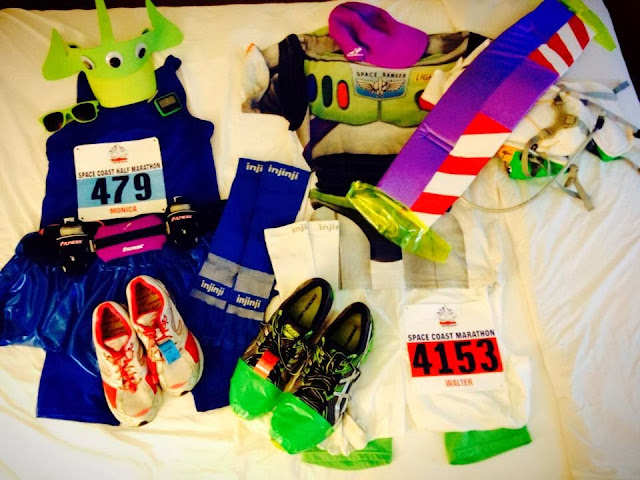 So in a few short minutes, we were dressed, packed, and on our way to the race.  We stayed at Cocoa Inn, one of the host motels for the race. They had prepared a bagged breakfast for all the runners since we would be leaving before the kitchen opened.  It was a nice touch.

The starting area had as much enthusiasm as any race I have participated in.  Tons of volunteers, tons of spectators, and about 5,000 runners.  They split the start times and at 6:00 am DB was off with the half marathon runners.  After sending DB off, I set out to find a Galloway pace group.  After talking with a few of the leaders, I settled on the 5:15 group.  Later, I would find this to be a mistake.

The race started with the singing of the national anthem and a big flat screen showing a shuttle launch countdown and blast-off.  This was a very nice touch.  As I followed the pace group, I felt like we were running too fast and walking too slow.  I managed to keep up with the group until about mile 11.  I was burnt out.  I looked at my half split time and I still managed to walk about 2 miles and come across the line several minutes ahead of schedule.  I may eventually try to track down a bib of a runner from the pace group and see if it was just my perception.  From this point, I just didn’t feel like this was my race.  I just finished out the race at my own pace. 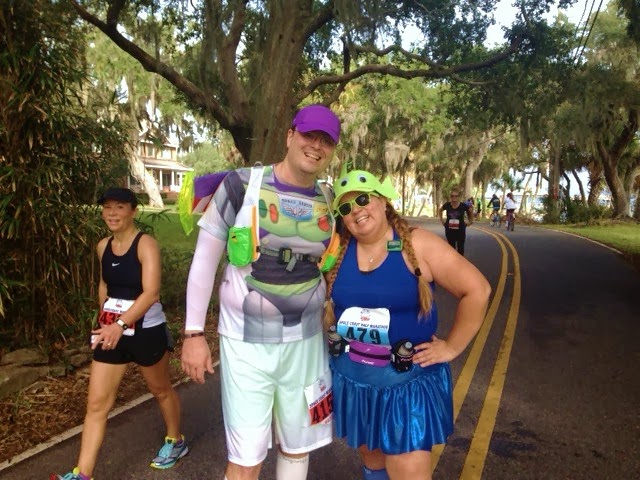 The beautifully flat course was full of spectators.  People set up chairs outside their homes and cheered us all on.  Several clubs set up tents and/or chairs for runners.  Providing everything from beer and margaritas, to oranges and pretzels.  And, lets not forget the amazing bacon tent. 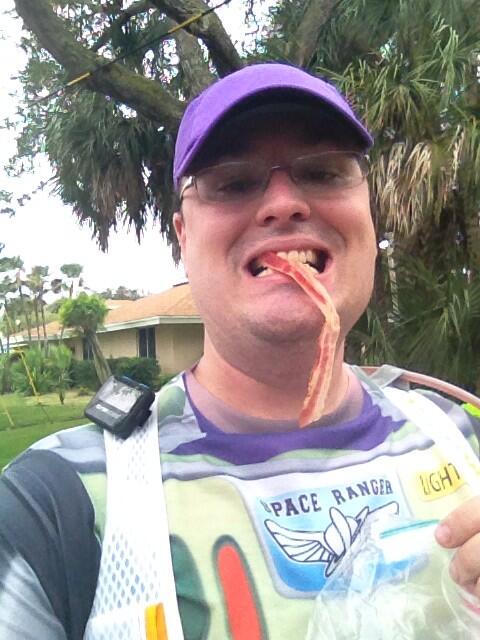 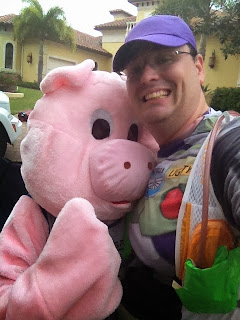 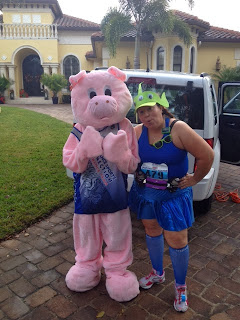 The numerous water stops (approximately every mile) were manned by extremely enthusiastic volunteers.   Many of whom had dressed for the occasion.  My favorite was the water stop in the 2nd half of the race that had several fellow Space Rangers. Even for a back of the pack runner, the stops were well supplied with drinks and Gu. 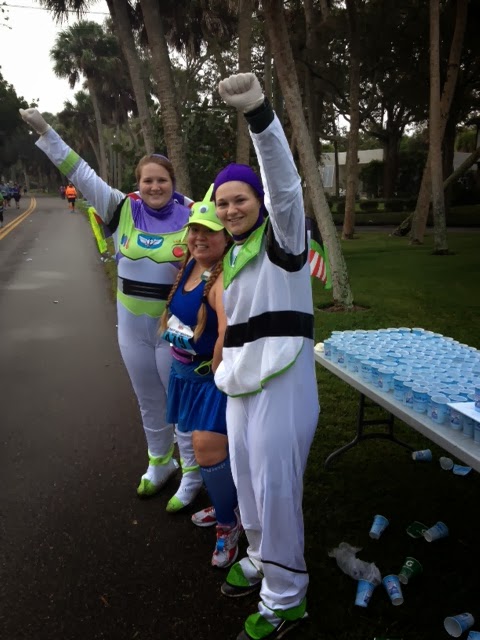 I had a great time on the course chatting with other runners and bumping into several friends we have made through runDisney events. 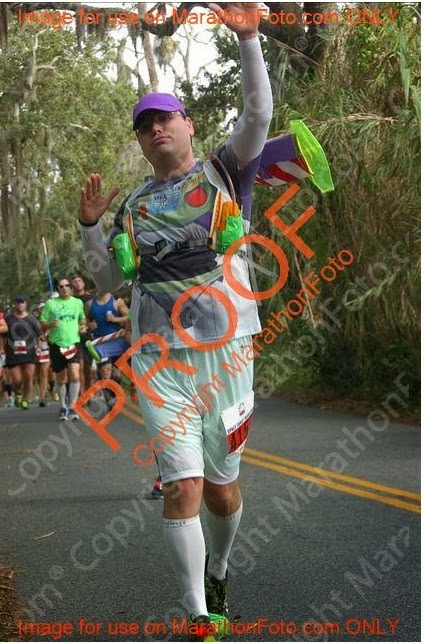 Despite my super awesome jet pack with wings... I crossed the finish line without a new PR.  I guess that will have to wait for a future race.

Once across the finish, I received my finishers medal (This thing is huge!), my race towel, and walked over for a post race picture and my breakfast. 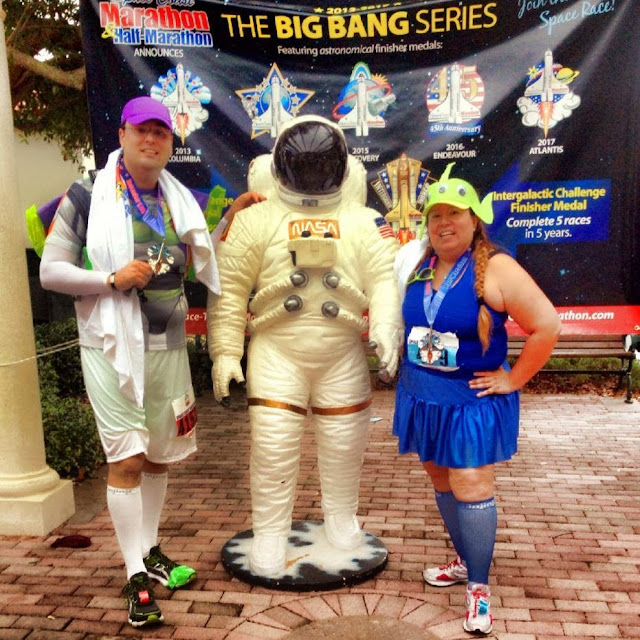 I only have one complaint about the race.  It did not appear to have adequate medical support on course or the finish line.   I watched several runners get medical attention from spectators or fellow runners.  Apparently, there were several medical tents on the course; I only saw one.  At the finish line I watched several runners tending to broken toes and perhaps other broken bones in their feet (one runners feet looked like they had frost bite- really gross).

One really cool moment, DB had post-race.  She found Jeff Galloway shortly after he crossed the finish line.  He had attempted to qualify for the Boston Marathon - and he had just gotten his Boston Qualifying time.  He told her: by six seconds.  That's awesome and we are really happy for Jeff, as we know this was a goal of his this year. 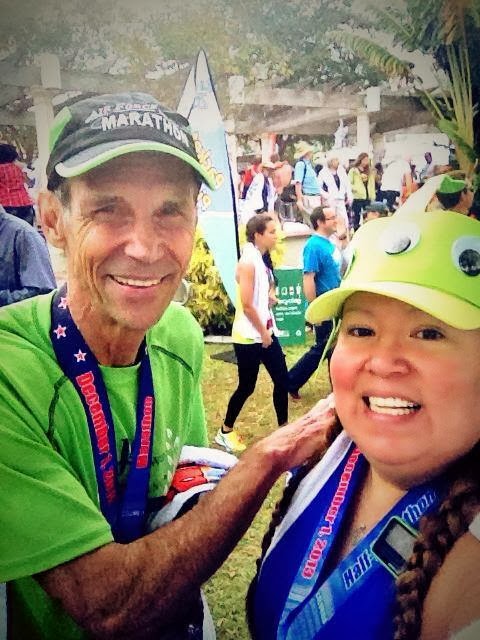 DB wanted to mention that there was a really inspirational runner at this event. Blind runner Candice Jordan, bib # 2356 walked the Half assisted by her guide dog, and led by Peterann Siehl bib #1583.  Lots of amazing runners out there - but this one was particularly noteworthy.  Candice and her trusty guidedog got a lot of well-earned cheers that day. 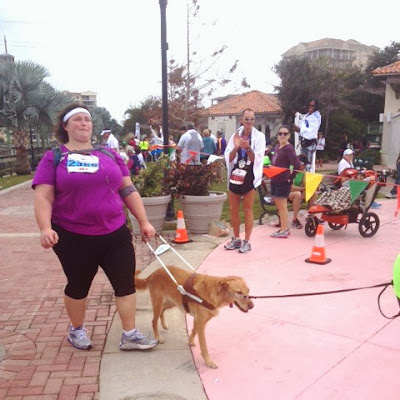 I look forward to doing this race again.  The race was obviously experiencing some growing pains with the big increase in registrations this year. Most likely due to the Big Bang Series medals.  I hope the race organizers learned from the experience and make this great race even better.   I can’t wait to see everyone again on November 30, 2014!

I mentioned that after my Marathon, we headed to Walt Disney World for our Anniversary. DB will be recapping that leg of the trip. There was no running involved - just recovery. But hey, that's part of the training process too.

So finally, a pic for my buddy, Larry.  He and his wife were registered for the Full and Half respectively, but didn't make it.

Larry, I just wanted to let you know that a moon pie tastes even more delicious when one is wearing an awesome race shirt, wrapped in an amazing towel, and adorned in what is perhaps the coolest finisher medal ever. Hopefully you two can make it to Space Coast next year.

If you haven't already entered, check out this week's blog giveaway - a free entry to a Spartan Race.
Tweet

Congrats on your finish - I love both of your outfits (as usual) and it looks like you had so much fun!

Fairytales and Fitness mod
9:50 AM

Congrats! You got some great pictures. I love your outfits! So appropriate! Looks like you had great weather too which is always a big plus!

Thanks Meg! We did have a good time. Already looking forward to next year!

Thanks. The weather really was on our side that day. It was overcast enough to keep the sun away - the temps were cool enough to be comfortable. And the rain held off until the last hour of the marathon. Then there was just a light little cooling mist of rain. Was ideal running conditions I think. Need to start scheming for next year's costumes. But I already have some ideas. :)

Awww I love both of your outfits! I had heard about Space Coast through some other friends who live in Florida/Georgia last year, but it seems like it was advertised much more this year. Hopefully next year they'll be even more accommodating for all of the runners coming in! Congrats on both of your races!

Thank you! I had alot of fun. We had heard soo many good things from runners that have run this race in the past. Now I can be one of the runners spreading the word. Perhaps you'll join us next year. -DG

Congrats on each of your races!!! I love y'alls costumes. I have yet to tackle a full marathon yet, but I'm on my way :0)

Lauren, the Space Coast is a good one to attempt a full. It has a fun theme, a generous time limit, and a flat and scenic course in our beautiful Sunshine State. Best of luck with your training!