in #DGselfie, bacon, buzz lightyear, costumes, dopey challenge, Jeff Galloway, recap, rundisney, runDisneyvolunteer, training, wdw marathon - on Tuesday, January 14, 2014
The morning of the long awaited Walt Disney World Marathon was finally here.  Somehow I flew out of bed. I'm not saying that I loved getting up, but I was really looking forward to the event.

I'm sorry this post didn't make it up on the day of the event itself. As you can imagine, I was pretty spent once I made it back to the resort.

DisneyBride and I arrived for the race a little earlier than we had for the half marathon. I didn't want to be rushed during the long walk to the corrals. I think that this was a huge help for the full. Getting into the corral early allowed me to take a seat for about an hour. A great help for the legs.

Jeff Galloway gets the honor of the first DisneyGroom selfie of the day.  Since it was his advice and coaching that got me here - this is only fitting. 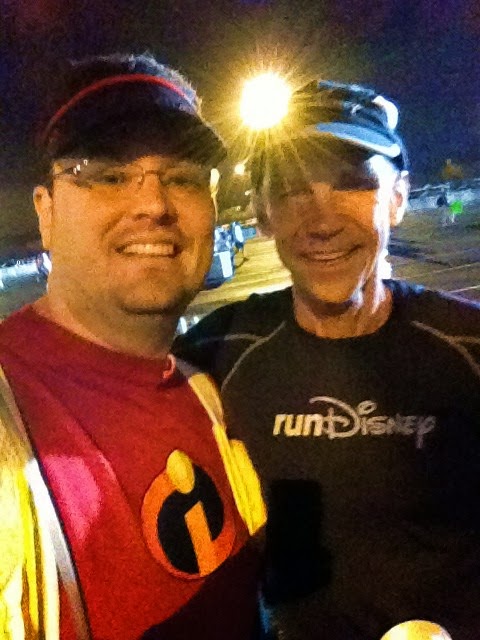 The sendoff was fantastic. Mickey, Donald, Goofy, and Dopey (if there we others it's slipping my mind: a lack of sleep will do that) participated in the festivities. Mickey did the countdown and the fireworks were perfect. They even had fireworks near the back of the corrals.

The atmosphere was amazing, even for a runDisney event. It seemed like there were wall to wall spectators almost the entire course. People really brought their "A" game.

I did get to see my favorite spectator a couple of times:

First at the Ticket and Transportation Center(about Mile 4) 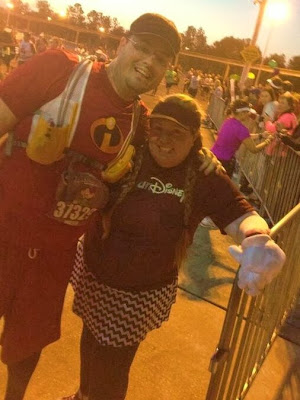 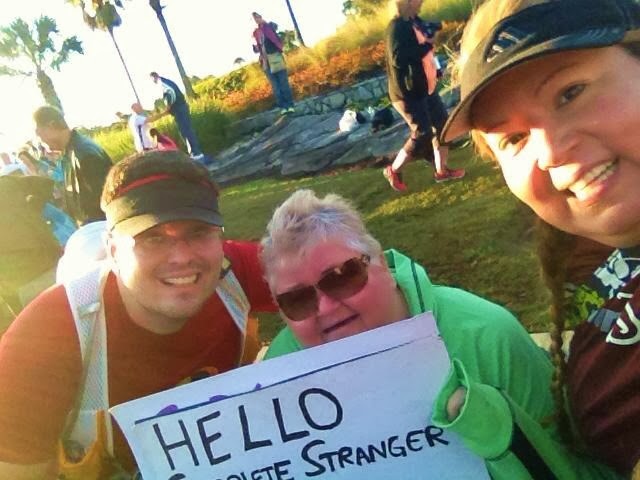 and at the finish line. The beginning of the course seemed to be identical to the half marathon the day before.

A couple of bands on the way into the Magic Kingdom really added some energy to the event.

Arriving on Main Street, there were even more people than the day before. The cheering was loud enough to hurt your ears. I also managed to hold onto my phone this time. (I lost it running the half the day before - but thankfully a wonderful spectator found it and returned it to me. Miraculously it was fine.) 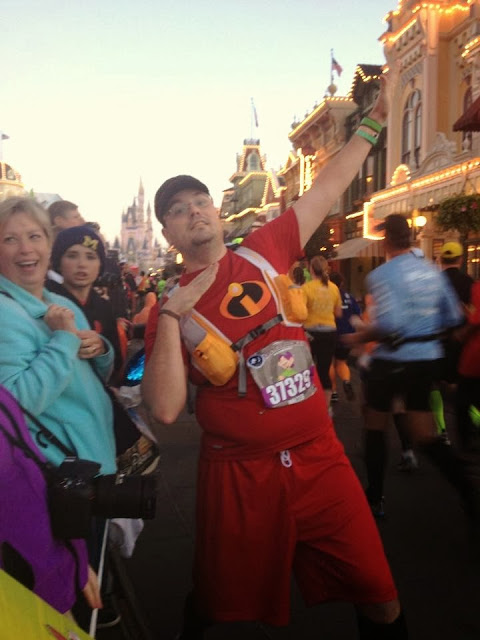 My next stop should come as no surprise. 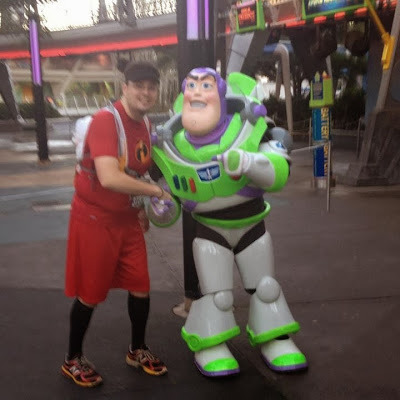 Then I moved quickly through the Castle area - a notorious bottleneck in the course.

I don't usually stop for this guy, but the line for Woody was only a couple of people deep. 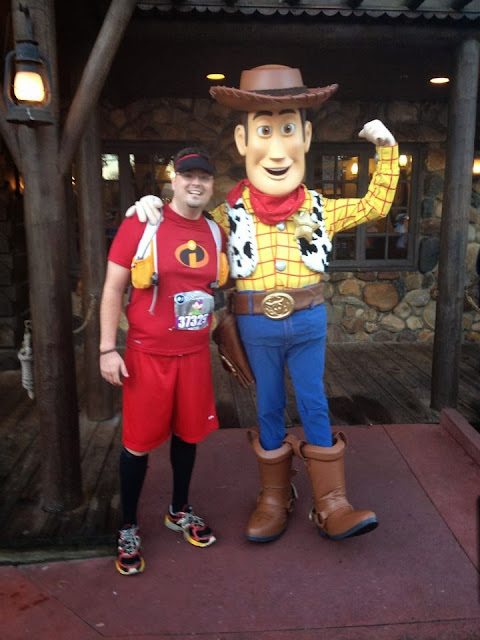 Again, the course from the Magic Kingdom to the Walt Disney Speedway was almost identical to the half the day before.  And again, the spectators were out in full force.  It might have been my imagination, but it really appeared that the number of people cheering us on may have actually outnumbered the runners.

The speedway was pretty neat.  You get to run a lap around the track that is surrounded almost entirely with classic and custom automobiles.  The track was also the location of the only bad congestion of the day.  The entrance is only wide enough for about a truck, so you can imagine how it might back up.  It wasn't terrible, just noticeable.

Look who I ran into!  Running blogger, marathoner, and all around awesome individual, Kimberly Markey of Maker Mother Marathon Runner blog. 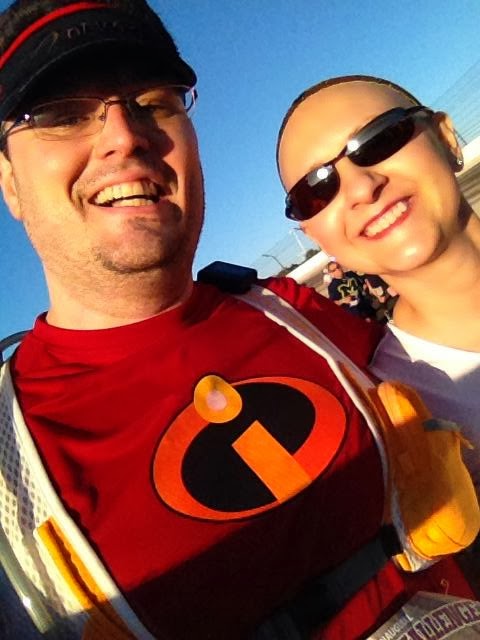 Only occasionally did an unpleasant smell rear its ugly head.  However, Disney seemed to provide plenty of distractions in the area.  My favorite was the traveling couple near their RV offering runners pickled herring.

Arriving backstage at the Animal Kingdom, the staff had a few animals out for us.  The first accompanied a pretty funny sign.  The second made me really hungry.


Side note, in all the backstage park areas, the staff was pretty amazing. They went all out with spectator signs, in addition to making themselves hoarse cheering for us.

Entering the park led to one of my favorite moments of the day.  The course runs right past Expedition Everest.  Staff and park guests move runners to the front of the Fastpass lane.  How many people get to ride a roller coaster in the middle of a marathon? This guy did! 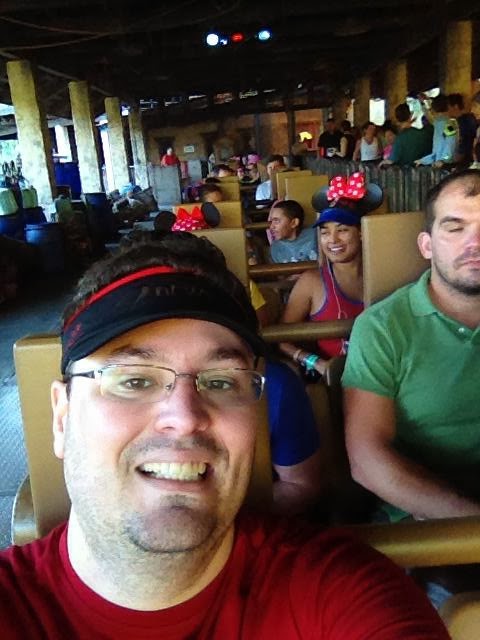 Exiting the park, you finally hit the half way point.  You also start making your way to the Wide World of Sports.  This may have been the part of the course I felt needed some more entertainment.  The infamous Grave Diggers were on this section of the course, but their line was super long.

The course through the Wide World of Sports is entertaining.  After arriving at the Wide World of Sports, you head to the track.  This was a little cruel.  Thanks for reminding us that there are running events shorter than 26.2 miles.  After weaving all over the complex, you end  with a run around the baseball field.  While there is not a lot of entertainment, the scenery changes constantly.

Just outside the Wide World of Sports you finally hit the 20 mile mark.  Just beyond the 20 mile mark, some spectators were poking fun at last year's 'Mile 20 Spectacular'.  They had some of the most hilarious signs of the day.  Unfortunately, I didn't stop and take any pictures.

Right before entering Hollywood Studios, you are provided with chocolate and/or gummy bears.  Before the race, I thought this was a terrible idea.  Arriving at the table, it was genius.  So tasty!

Just after the chocolate, I made another character stop.  Wreck It Ralph took it pretty easy on everyone.  He allowed us all to pass without destroying the road. 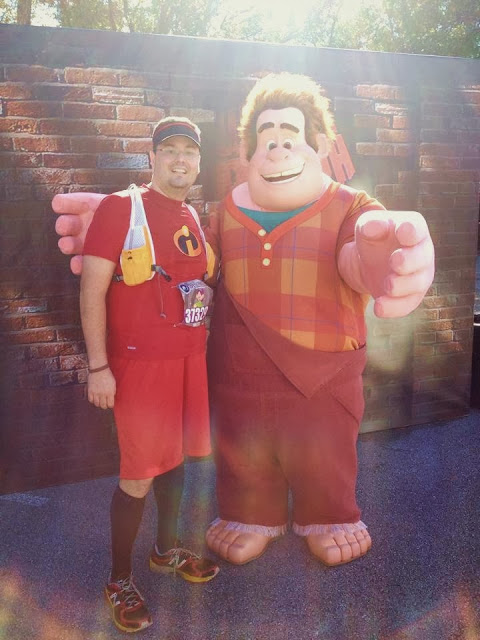 You are only in Hollywood Studios for a short period of time.  I made it to the front gate before remembering Toy Story's Midway Mania.  I was pretty tired and not thinking straight.  Not wanting to go back, I just kept running.  Next time-I will ride it.  (Yes, I think I just said - NEXT time...)

Leaving Hollywood Studios you quickly get to the part of the course with the most vocal spectators.  The Yacht and Beach Club is packed from end to end with people cheering themselves hoarse. 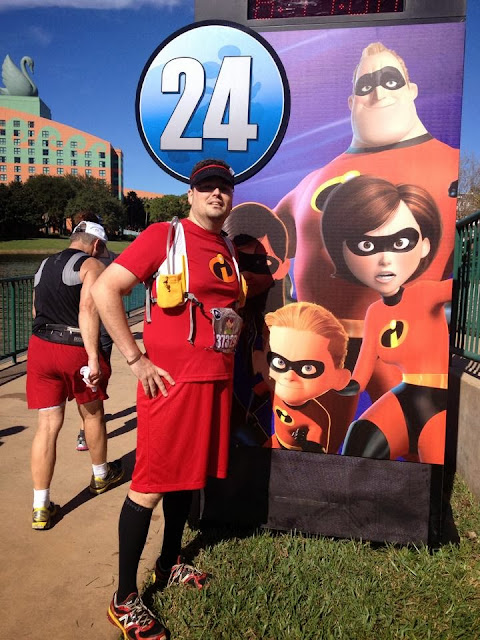 Before entering EPCOT, I finally got the picture I waited for all weekend.  Dopey greeted runners just outside the International Gateway, and the line was short.  I think people just wanted to be done with the run and weren't stopping for anything. 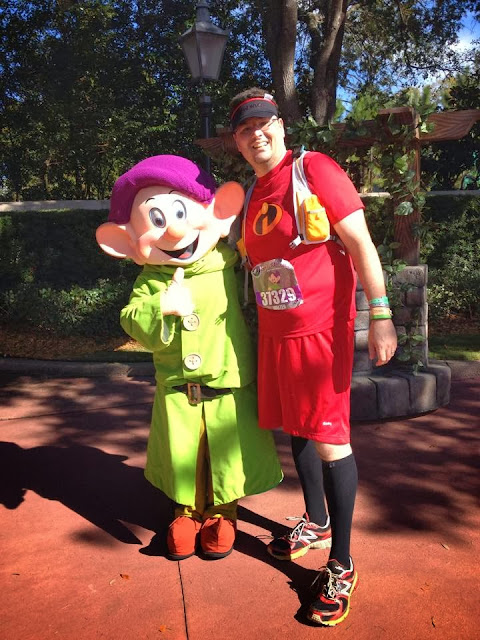 EPCOT was a lot of fun.  In Germany, I stopped for a beer.  A kind person at the front of the line turned and asked me how the marathon was- I responded that I would be happy to let him know in a few minutes.  Amazed that I wanted to stop for a beer to enjoy as I finished the race, he bought it for me and wished me a great race.  Thank you stranger.  FYI- The beer was amazing, cool, and refreshing. 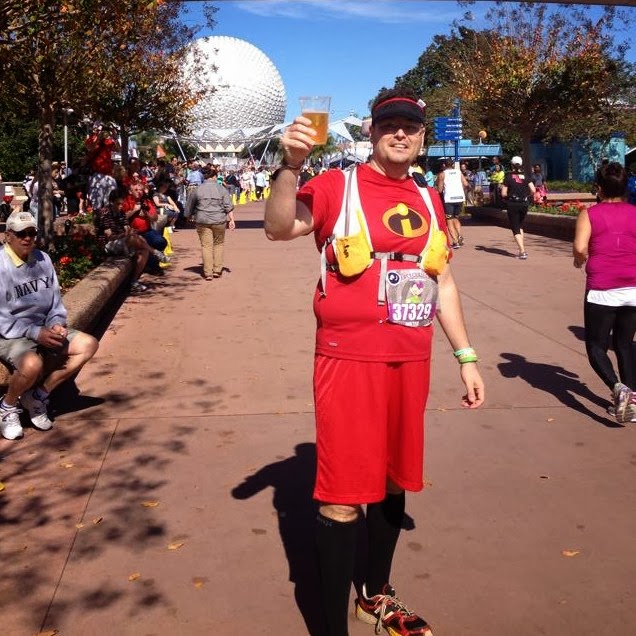 Just before finishing, I came across a group of ladies that were crossing the finish line with margaritas. 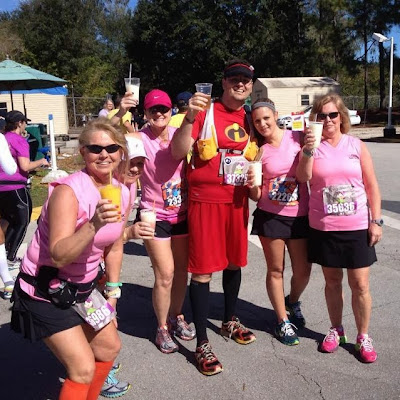 Finally crossing the finish line was a great feeling.  It is quite a feat to complete the Dopey Challenge.  To all my fellow finishers- Congratulations! 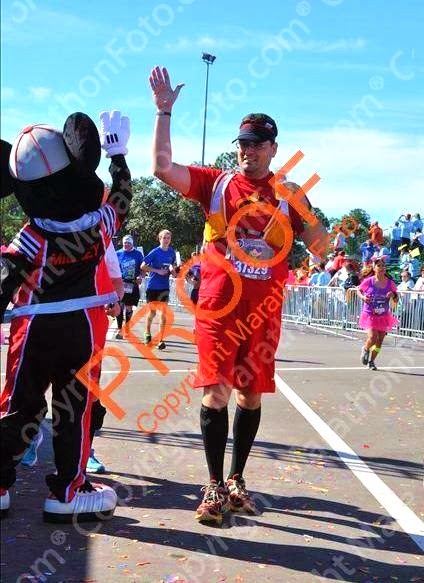 Quickly I worked my way to the medal volunteers to receive my marathon medal.  With the marathon medal around my neck, I was off to get my Dopey and Goofy medals. 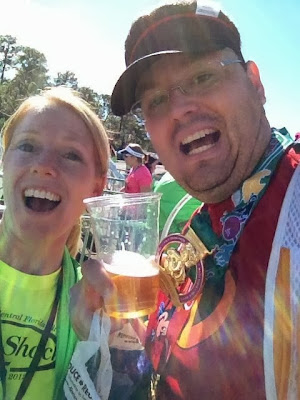 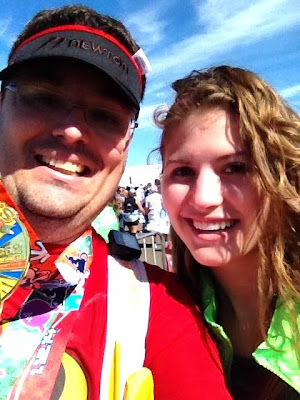 Since runDisney hasn't taken my suggestion to provide post race Tonga Toast, DisneyBride was kind enough to bring it to me.  There was even BACON! Much better than the box they gave us containing a tiny bag of chips and cheese dip. 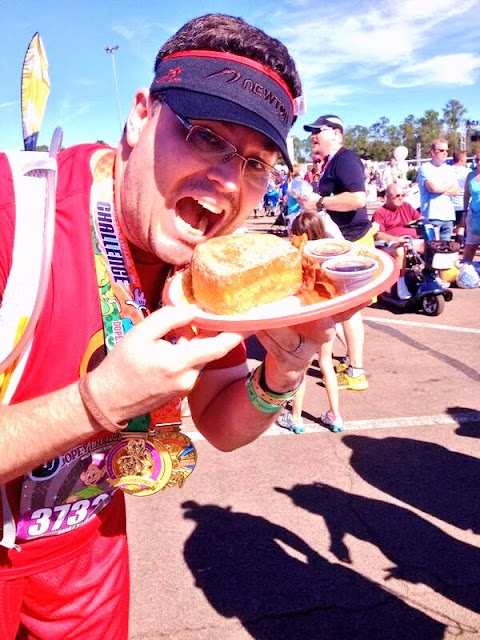 Finally, back at my resort, I had my own Pam Anderson "post-Marathon" moment.  Unlike Pam, I wasn't in any actual pain, except perhaps from reading her book! 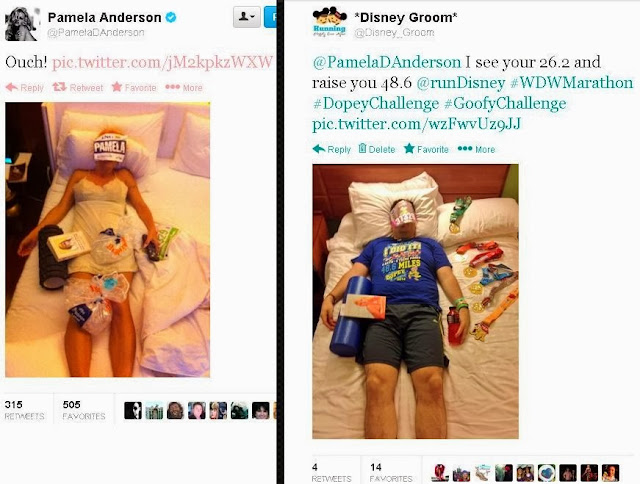 I rested for a few hours - took a little swim - and felt better than I expected.

We went to the Downtown Disney cool-down celebration for the runners for a little while - then went to Boma at Animal Kingdom Lodge for dinner. Now that I could finally eat (after a week of peanut butter sandwiches), it tasted like the best dinner I've had in months! 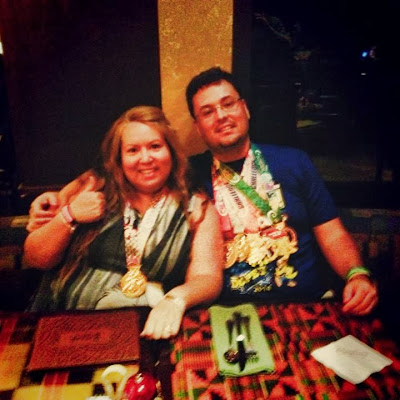 Did you go to Marathon Weekend?  What was your favorite part?

If you did Dopey, would you do it again?

If you didn't do Dopey, can you see yourself doing a similar multi-day race event? (I'm thinking Gasparilla in 2015!)

This is an awesome recap, and some amazing pictures! So sweet of your wife to bring the Tonga Toast for you. I'd love to try that sometime!

She brought you Tonga Toast?!? best spectator ever. Great recap and great pictures!

Wow!!! This is fantastic!! I didn't know of all the added bonuses with the full marathon: the rides, the beer, even the awesome extra places you get to go through!! Love all your photos as usual :) CONGRATULATIONS!!

I thought it was great! -DG

Unfortunately, Disney doesn't provide beer. The rides were a great way to break up the marathon. -DG

Thanks. I look forward to meeting you at a future runDisney event. -DG

I love that you are high fiving Mickey Mouse with a beer in your hand at the finish line!! Congratulations on an amazing Dopey Challenge weekend!