in product review, vegan - on Thursday, January 16, 2014
This blog - this entire journey really - has had an end goal of weight loss - for both of us.

Most of our blog posts are centered on running, gear reviews, and race recaps.  Running and preparing for races has many rewards, but it hasn't been the 'Magic Weight Loss Pill' for us.  Some people start running and the pounds melt off. Not us.

The tone of our blog is upbeat and positive by design. But, in the interest of blogging honestly, fighting to lose each pound has been an uphill battle. We both struggle daily with our weight and making healthy lifestyle choices, especially eating choices.

DisneyGroom and I both will splurge on our vacations, but back at home, it is a different matter.  We do our best to eat the freshest food we can find and prepare simple filling meals.

Breakfast seems to be our big trouble spot though. Neither one of us is a morning person, so we typically fly out the door and head to work without eating anything.  DisneyGroom will keep a stash of oatmeal in his office, and often remember to eat one later in the morning.  But I often forget to have anything at all.  I'm in that category commonly known as The Breakfast Skipper.  And when you consider I don't drink coffee, I couldn't tell you what actually gets me going in the morning. 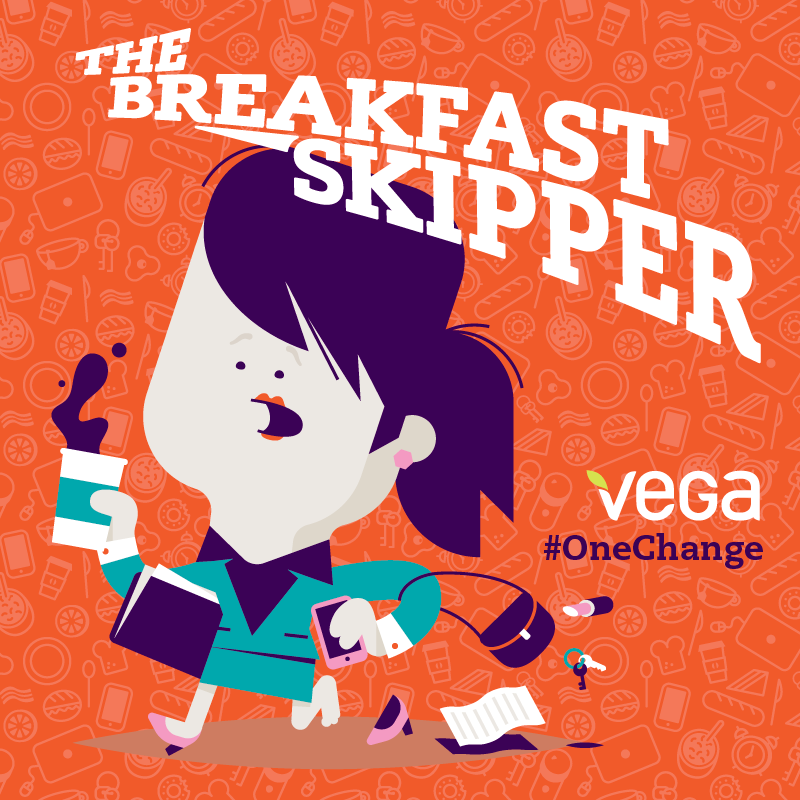 If I do have time to stop, then maybe I get a drive-thru breakfast sandwich...  I know what you are thinking - THAT's TERRIBLE!  Yes, it is.
And it has to stop.

So here we are in a new year. Renewing our commitments to eat healthy.  In need of a jump start, we are both turning to meal replacement shakes.

DisneyGroom is drinking meal replacement shakes provided by his nutritionist.  I've been trying out Vega One shakes, as part of their #OneChange campaign.

Many of the elite endurance athletes (runners and triathletes) I admire and follow are vegan.  One in particular Brendan Brazier, Author, Ironman, and Vegan Activist, is the developer of the Vega One shakes.  Unlike many shake powders that contain animal proteins - this one is entirely plant-based.  I'm the first to admit I would rather have solid food than a smoothie, but with Brendan solidly behind this product, I had to try it.

Now, I've not been a meat eater for over twenty years, but I did eat seafood occasionally.  However, as of the end of 2013, I stopped eating fish also.  I have many reasons for doing this - which I may get into another time, but my ultimate goal is a completely Vegan diet.  I figured these shakes were a good start.  It would be my #OneChange to replace my 'egg whites with cheese' morning sandwich.

This morning, I made a smoothie with the French Vanilla flavor.  I didn't go too wild with ingredients.  We are just back from a week long trip (runDisney Walt Disney Marathon Weekend) so the fridge was pretty bare.  The smoothie was very simple: just rice milk, a ripe banana, ice, and the Vega One.

Appearance:
I was first struck by the color - sort of a pale pea green.
This was a surprise at first, but oddly reassuring as it legitimized its 'green vegetable' origins. 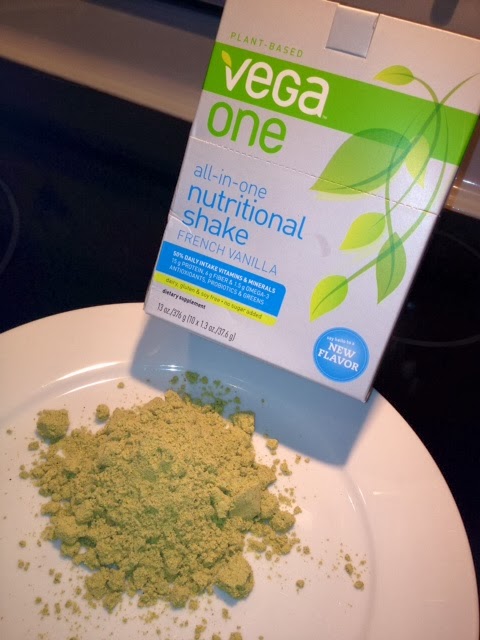 Smell:
Very mild, a green veggie smell - in a good way.  With a soft hint of vanilla.

Taste:
I tried it first plain - just water, ice, and the shake mix.  I discovered I needed some flavor, so I blended it with banana and rice milk.  Much better. 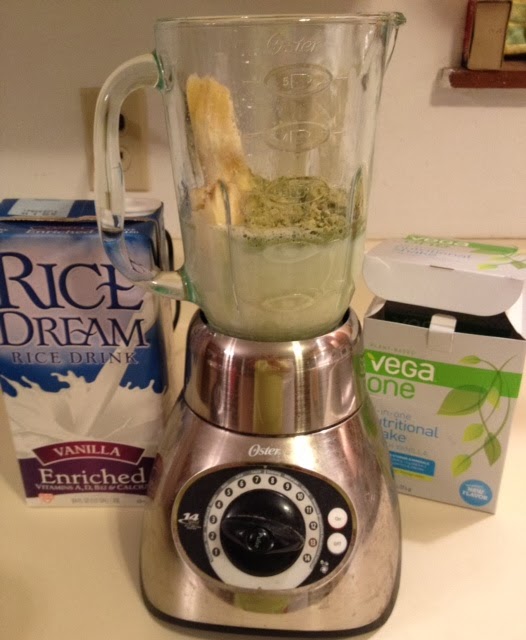 Not all shakes are created equal.  Vega One's content is comparable to high-end, high quality shakes, with the added bonus of being vegan. Not bad.

There are several products available, including bars and pre-made smoothies.  The Vega One site contains a complete ingredient list of each.  I've added the ingredient list for my French Vanilla shake here. 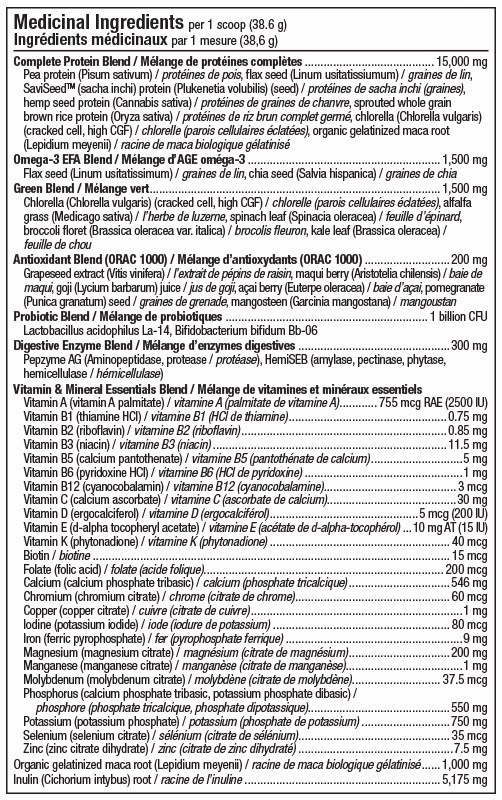 Is this a product I would buy?
Yes.  French Vanilla wouldn't be my first choice; the other flavors are Chocolate, Natural, Vanilla Chai, Berry. I would definitely go for the Chocolate or Berry. 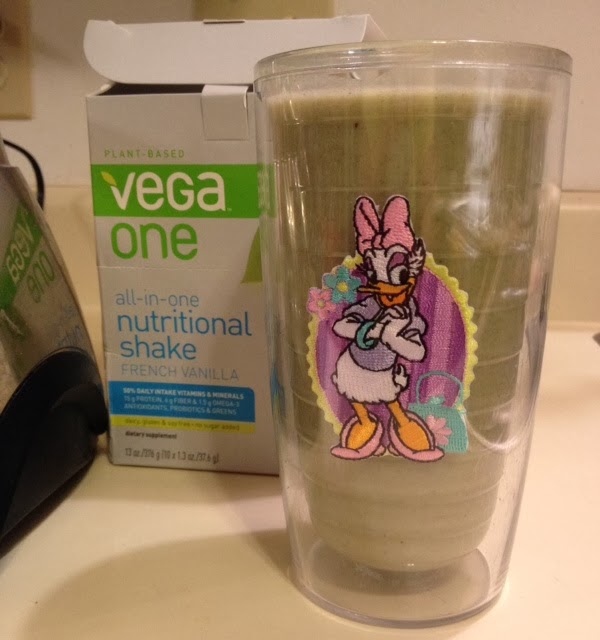 I'm hoping these shakes will prove to be an excellent jump start to 2014, especially in regards to my breakfast.  We'll also be adding some more nutritional product reviews in the near future, as we seek out the best fuel for improving our health and our running.

Disclosure of Material Connection: We were not financially compensated for this post. I received ONE box of nutritional shakes to review, as part of a partnership with Fit Approach, Sweat Pink, and Vega One. All opinions stated are my own. I am disclosing this in accordance with the Federal Trade Commission’s 16 CFR, Part 255: “Guides Concerning the Use of Endorsements and Testimonials in Advertising.”

Fairytales and Fitness mod
8:59 AM

Glad you liked the Vega one! I received the vanilla as well and would love to try the chocolate too!

Meranda and Lacey just did a review of this too - it seems to be a good product. What all are the ingredients in it? I am definitely a breakfast eater. I usually have oatmeal with almond milk and a piece of fruit!

Lauren - that is a great question. I updated the post with an ingredient list. I read labels - so this is good information. I love oatmeal with almond milk. Need to start packing breakfast to work, along with my lunch. :)

I really liked your review. I prefer chocolate, so I went and looked up some recipes on their site. I might try adding some of my remaining shakes into the batter when I make muffins or brownies. Might even attempt a protein Banana Bread... hmm

glad you liked it. i'm partially to the vanilla, then the chocolate. to me the berry tasted gritty and not quite berry. funny tastebuds!

Ah ok. Berry can be tricky sometimes. I may just order the smaller container in case I don't love it. Chocolate, I ALWAYS love. :)