2015 Walt Disney World Marathon Weekend Registration! Are you in?


Today is the day.  The day registration for runDisney's 2015 Walt Disney Marathon weekend opens up to the general public. 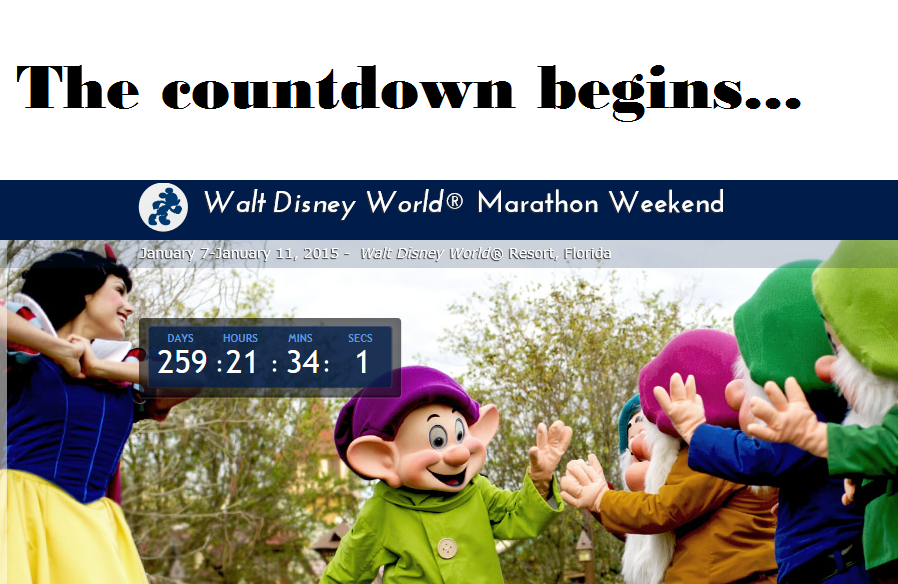 DisneyGroom:
It has been said that "Pain is Temporary and Pride is Forever".
It must be true, because it looks like I will be running the Dopey Challenge once again.
Remember this guy? 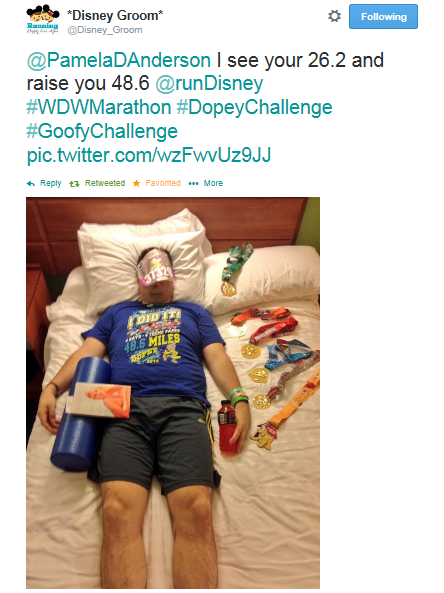 Me neither.
I finished the Inaugural Dopey Challenge (5K, 10K, Half Marathon, and Full Marathon) this January.  I was tired, but injury-free, so naturally I immediately began thinking about Dopey in 2015.  However, this does mean another summer of long training runs, weekends devoted to back-to-back runs, and weeknight training sessions.  It also means the longest and toughest training period will peak around Christmastime.
Last year I created my own training plan. But this year, I'll be following Jeff Galloway's Dopey Challenge plan.  Note: Jeff Galloway’s training plans are already available for WDW Marathon Weekend.  They have never failed me - so whether you are a newer or experienced runner, the plans are worth checking out.
Next January, I will try to spend more time enjoying the Disney Parks in between races.  I'll be the first to admit, I was dull and boring during Marathon Weekend this year.  I was just focused on finishing Dopey.   Now, with one successful Dopey under my belt, this time around I plan to spend more time enjoying the parks, restaurants, and meet-ups.
Early registration (for Annual Passholders and DVC members) opened up this past week for the 2015 Walt Disney World Marathon Weekend.  DisneyBride got us both signed up.
Looking forward to seeing my runDisney friends in January.  Perhaps this time, Buzz Lightyear will make an appearance.  If you haven't read my Dopey Challenge blog posts, they are available here. 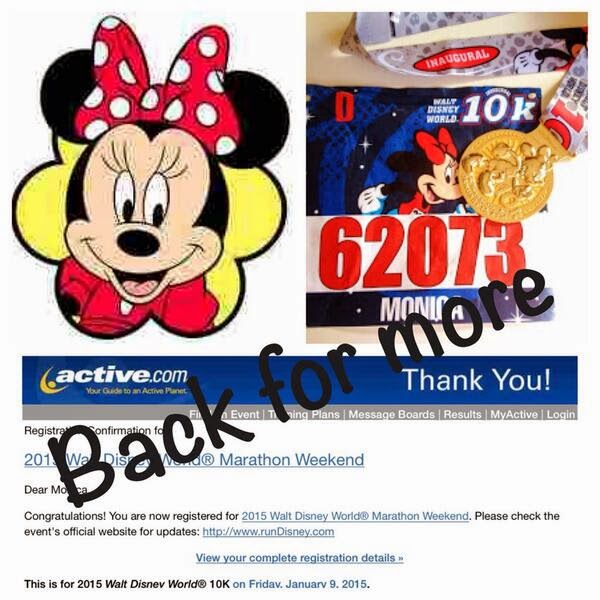 Fairytales and Fitness mod
7:45 AM

We are planning to sign up for the marathon and I have a feeling we will be those people who are dull and don't do much park time! We need rest..lol. I loved that picture of Disney groom and remember it all too well! Did Pam Anderson ever tweet back? We would both Love to do the Minnie 10K as that medal is just too cute to resist, but as you said, that is many many months away and we can not predict our schedules this far out ( especially if we plan to come back again for GSC). Good luck to you both and we hope to see you on the course!

Patty, you are my new hero. The Goofy bling is pretty irresistable! I hope to get there someday. I said the other night - maybe a 5th anniversary of Dopey. ~DB

That's awesome you are coming back for the full! Rest is always a good strategy! The parks will still be there when you are done. Pam never tweeted him back, unfortunately. Looking forward to seeing you again - hopefully we can hang out a bit more. :) ~DB

I signed up for the Goofy...my very first FULL marathon EVER!!!! I vowed to do it for the 10th anniversary and I can't believe that it's finally here! If either of you see me along the course, please feel free to kick me over to the side out of the way.

I'm kind of a little jealous about the 10K. I really wanted to do that one too, but I just couldn't trying to tackle my first attempt at 26.2. Good luck to both of you and hope to see you there! :)

Sorry, I meant see my passed out on the side of the course...if I'm still some how running please just say hi! lol

See you there!!! The hubs and I are going Dopey! Post race meet-up for celebratory food/drink calories are in order!

That's awesome Kellie! Goofy is a huge undertaking! I'm sure you won't be passed out on the side of the course! Hope to see you!

Awesome that you're doing the Dopey (DG) and 10k/5k (DB)!! I wouldn't be able to pass up another medal either! We aren't going to be there for Marathon Weekend this year as we will be there in October for ToT 10 and again in March for Spring Training but my current goal is to run my first full marathon at WDW in January '16!

I registered with two friends for the 10k! Its my very first 10k! Ran 3 5k's last summer and have my first next Friday. Although the weather here in Detroit won't be as nice as down in FL! Super excited to have my first RunDisney experience!

I really enjoyed ToT last year, I think you'll have a wonderful time! A full in 2016! Excellent long term goal! I have a feeling we'll be back in 2016, and I may have talked myself into a full by then. You never know. ~DB

oh yay! congrats on taking the leap into greater distance. Have you read our recaps of the Inaugural 10K? It will give you a bit of course info and insight into the event. I think that will be a wonderful first rD race for you. Hope we see you there!

You are both awesome! I registered for the marathon! It will be my first full marathon!!! One day I will go Dopey just like DisneyGroom has! Good luck with training for your races!

By the way, I just wanted to let you know that I nominated you guys for a Liebster Award in my last blog post!

Thanks! I hope you're right!

Also, I nominated both of you for the Liebster Award...I promise you get to talk about Disney! :)

Your going to have a great time! It will be hard waiting for it to get here:) I did the Disney World Marathon a few years back, great time!!!

Thank you! I have read the recaps, a good friend of mine found the blog and sent it over in the couple days before registration opened! Would love to meet up! good luck with the training!

The WDW Marathon is a great choice for a first marathon. Good luck with your races and I look forward to seeing you compete in a future Dopey. -DG

January will be here before we know it. Sounds like you need to make a return trip for the WDW Marathon Weekend. -DG

Good luck for the next dopey challenge! I am curious how the new training routine will work out.