in back of the pack, recap, trail running - on Wednesday, August 27, 2014
Yep, we've been bad bloggers and not posting too often.  In our defense, we've really been trying to enjoy every last bit of the remaining summer, before we head into the fall race season.

This is my recap for the second half of the four-race Gulf Winds Summer Trail Series.  You can find the recap of my first two races here.

The last two races of the Summer Trail Series were held on single-track trails at Tom Brown Park, in Tallahassee Florida. These are very popular, well-used local trails; DisneyBride and I run these all the time. I had hoped the heat would subside, however, it continued through the last two races. For some reason, the RD didn't arrange for cooler weather. I guess to make up for the heat, he provided Moon Pies for the last two races. Yep! Moon Pies! I thought the ice pops were awesome in the first two races, but Moon Pies trump ice pops every time. I might just have to eat one (or two or three) while working on this recap. 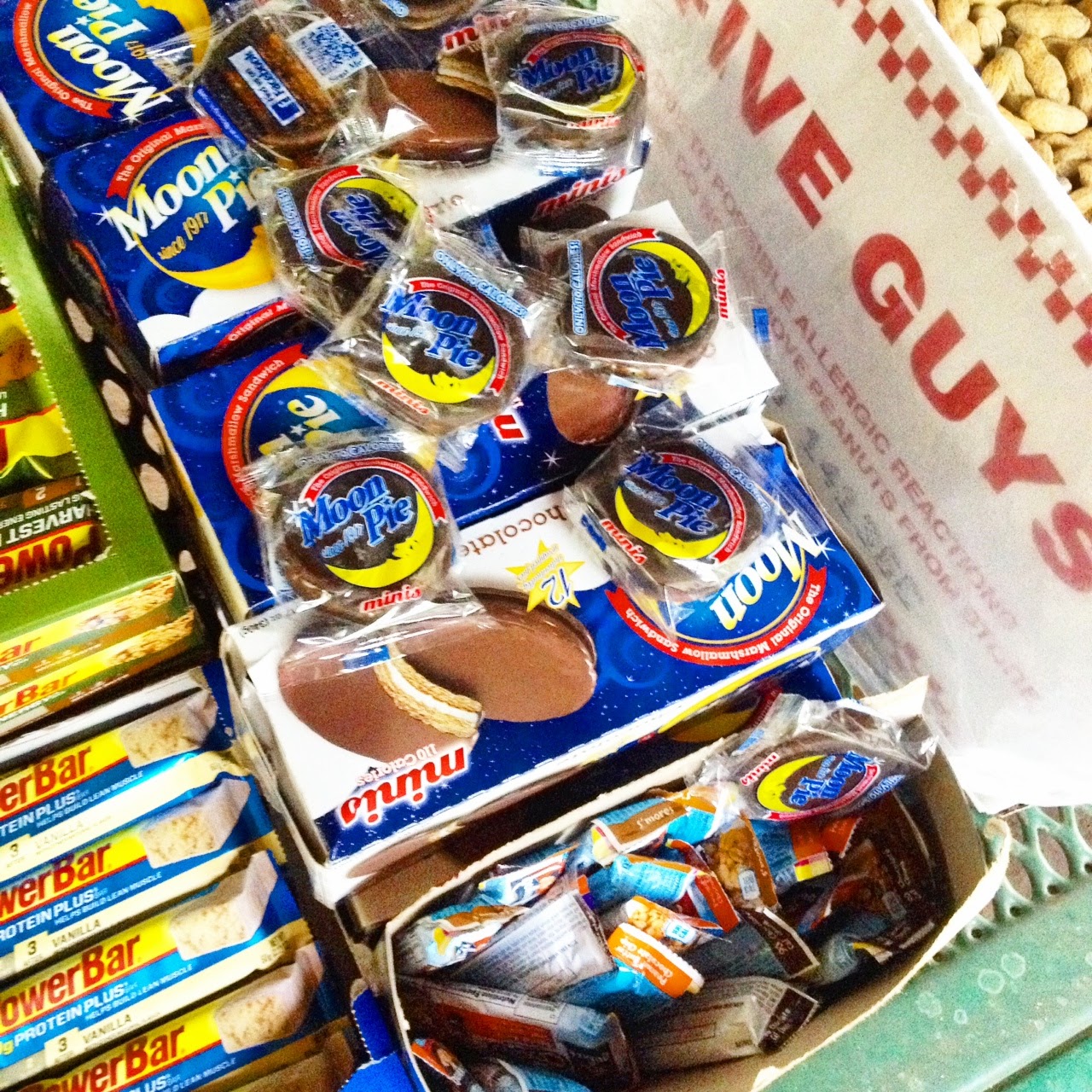 One of the coolest things about these events was bumping into some of our running friends in the 'off season'.  We really have a great running community here.

This was the shortest of the races and I think it was the easiest of the 4 courses. Thankfully, it was also the final evening event. I don't know why, but I am not a fan of evening races. Training runs fine, but not races.   Nevertheless, Magnolia Trail is a fun course with many twists and turns.

As many times as I have run this particular trail, there is no accounting for the unexpected during a race.  For the first time, I took a wrong turn  and found myself off the course.

There were some flags from a previous race still on the trail. I took a turn for a race that I wasn't actually running. Thankfully, I wasn't the only one. It only added a few minutes and some shame to my time.

No, there were no mid-course showers. I am completely drenched in sweat, as was everyone else that evening.

Okay, well not everyone.  DisneyBride remained fresh as a daisy, while she worked the finish line with the other volunteers.


Post-race, a group of us went out for a bite to eat. And there were some who did not bring a change of clothes.  Fortunately our friend Patty was prepared for such an occasion, and carried with her a can of Febreze.  Ross (shown here) and a few others decided not to subject the other patrons to our funkiness, and doused ourselves in Febreze's 'Gain' laundry detergent scent instead.  #DontJudge 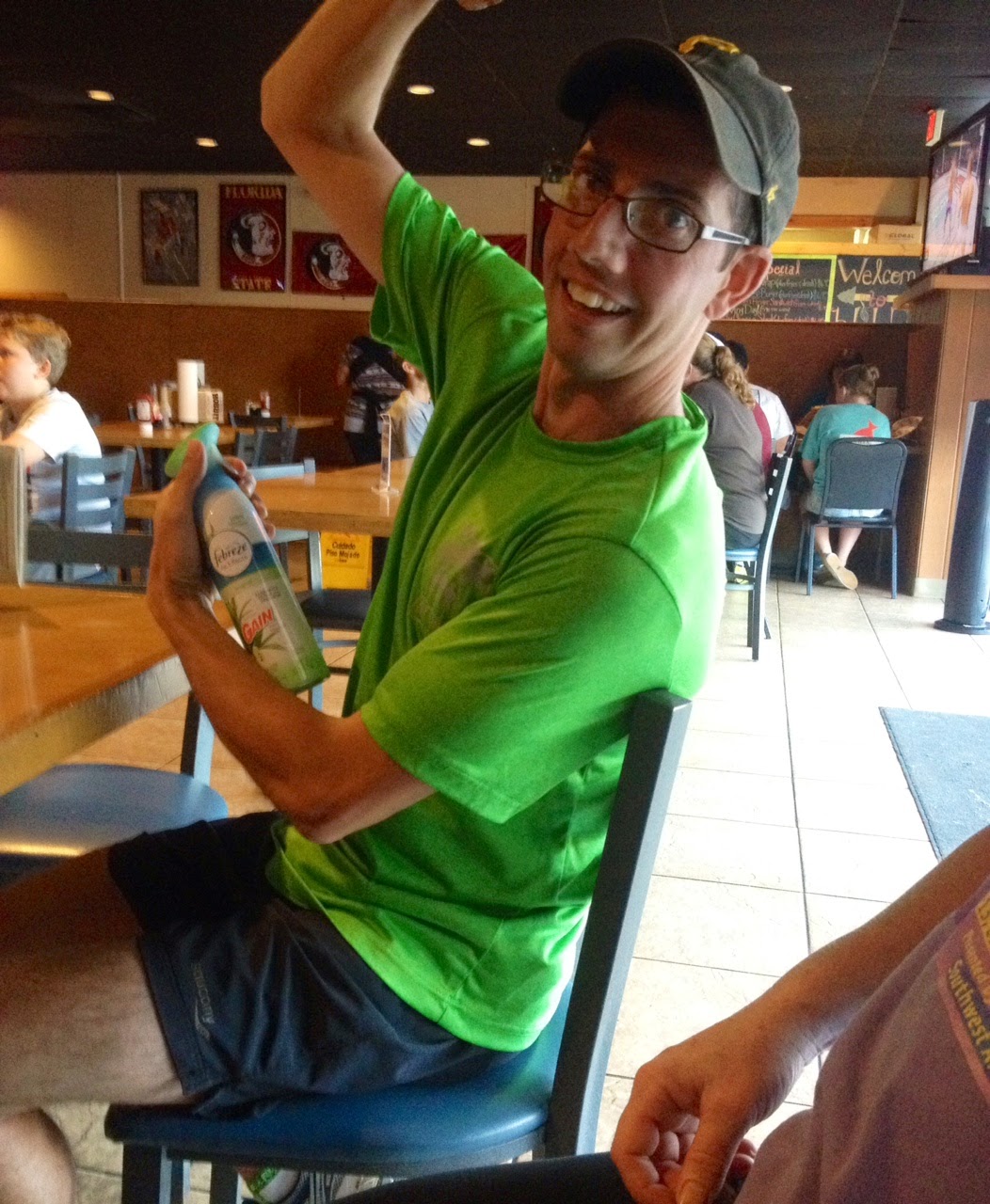 I always forget to bring a change of shirt to my local races, so DB may or may not have chased me with the Febreze.  (ahem)

This was probably my favorite race. This trail is pretty technical, very scenic, and has old abandoned classic cars scattered along the route. Yep, classic cars - hence the name: Cadillac Trail. 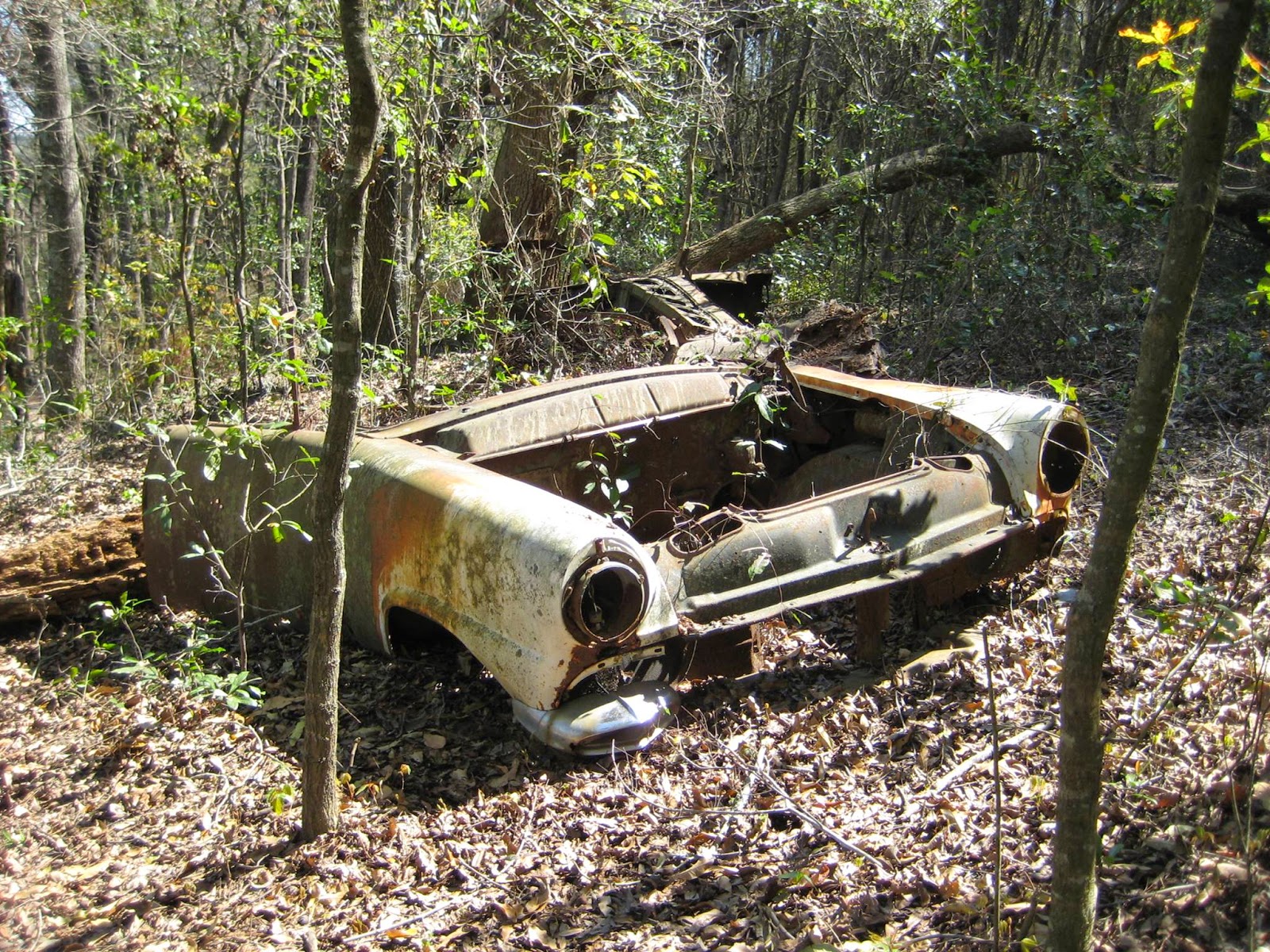 I have run most of this course before. This race showed me about a mile and a half of this trail I had not run previously.  Discovering new sections of trail is a great little adventure.

This course is designed for mountain bikers and has many cool bike obstacles. These obstacles are also a lot of fun to run over and having that additional challenge provides a much needed distraction from the heat.  At least I think so.  Luckily, this mountain bike course is always open to runners. I'll be back here for my next few training runs, as I really enjoy this one.

Pros
Since I may never be so lucky again, I feel obligated to mention "I never trippedl"! Yep, four trail races and I managed to not face-plant even once. I think that this is worthy of an award. Don't you?

Speaking of awards, here is the plaque for the age group winners. I know you are assuming it's mine, you would be very wrong. I managed to finish solidly last (Seventh Place out of seven) in my age group. I may fall into an "average" category in a runDisney race, but here in Tallahassee I am a back of the pack runner. 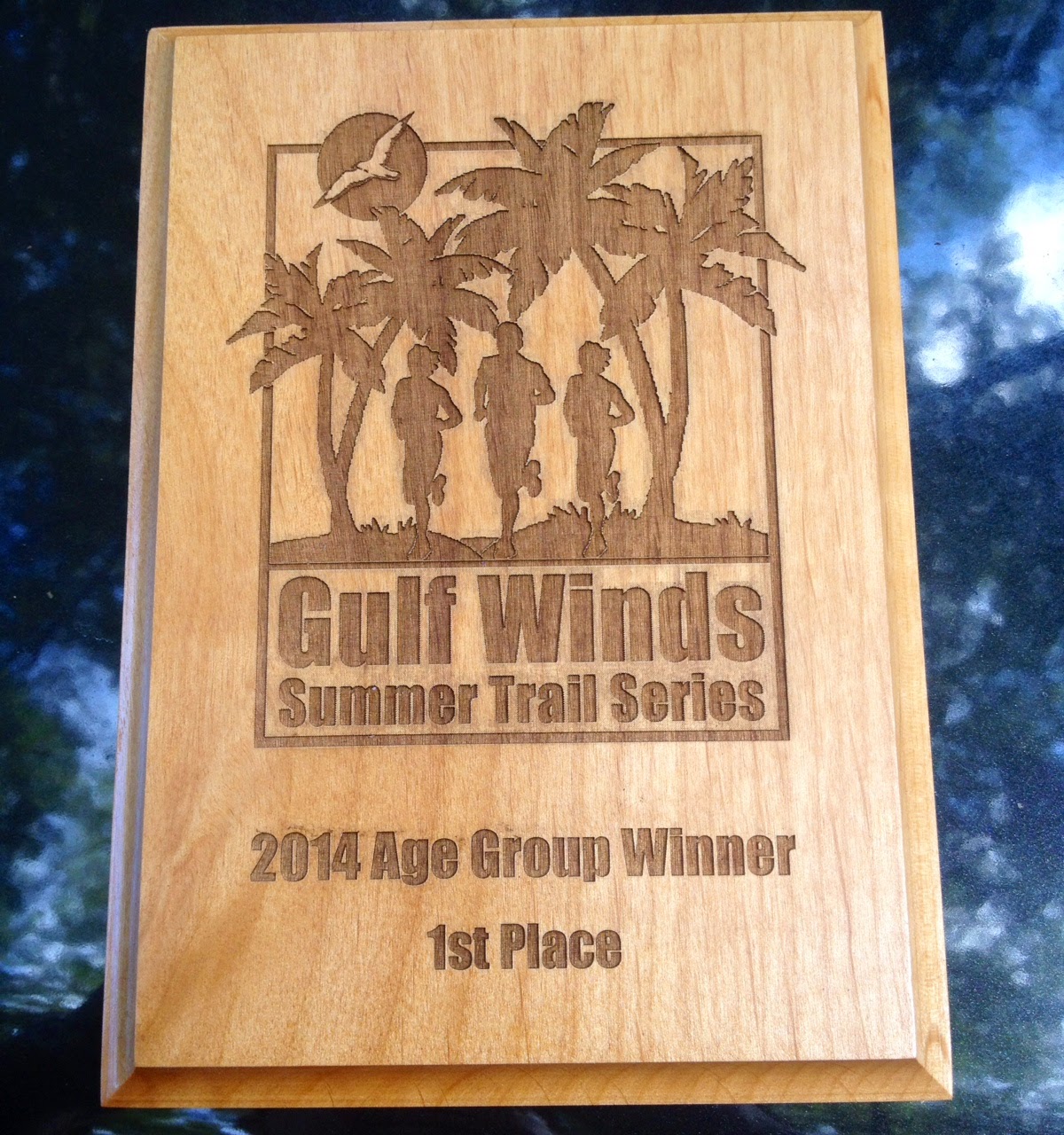 In addition to having an awesome Race Director, Bobby York, we had smiling faces and expert volunteers.  That really makes a difference in a race - however big or small.  Special shoutout to my lovely DisneyBride, who worked the finish line at all four races.

Cons
My only complaint about the series happened during the last race. While a few runners were still on the course, the raffle/awards ceremony started.  The raffle winners were required to be present to win. One of our good friends was still on the course and her name was called for a really great raffle prize: a pair of Salomon trail shoes.

Fortunately, we told the organizers she was still finishing her race and they held her prize.  Several names were called with no response.  Some had gone home already after the race, some had missed the fourth race of the series, and there may have been a few other runners we didn't know - still out on the course.  I understand it was hot and people wanted to go home, but perhaps the 5.5 mile course (one of the toughest trails at that) wasn't the best choice for the final event ~ coinciding with the raffle/awards ceremony.  Awards were given at the end of the entire four race series, not for each event.  And the presentations took a long while.  A shorter course for the last event, and everyone would've been done sooner, and fewer would've missed out on the awards and raffle.

In case you are wondering, this box of Moon Pies was not my raffle prize.  I won a subscription to Trail Running Magazine instead. Almost as good. Almost. 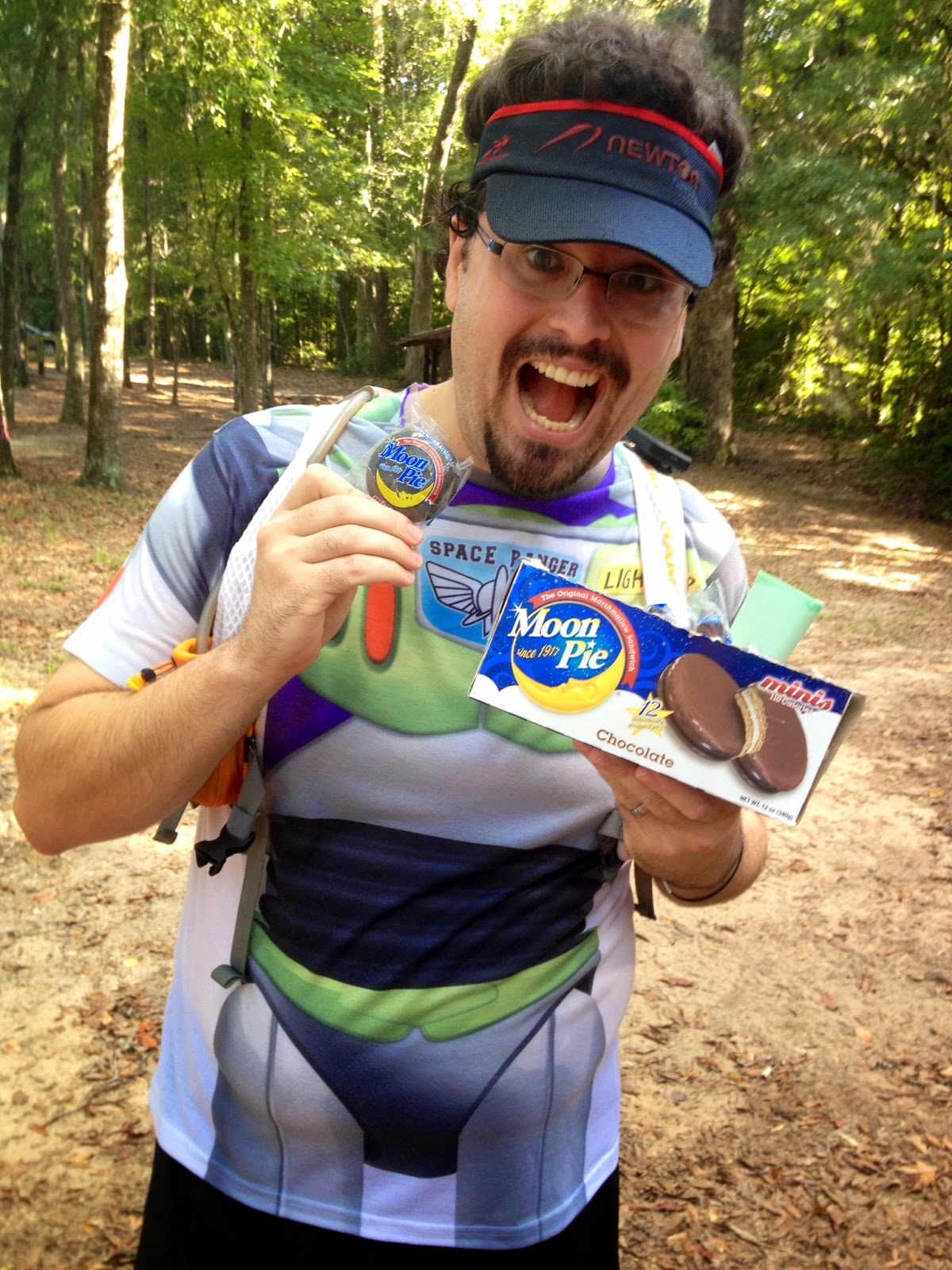 Final Note:  Moon Pies were consumed during the writing of this blog post.


So that wraps up my summer race events.  Can't wait for the temps to drop a bit and our longer distance events to start coming up.

Do you love Moon Pies as much as I do?

Did you discover a new use for Febreze?

(thanks to my sponsors: SportKilt and XRaceWear for providing me with comfortable running apparel)
Tweet

Labels: back of the pack, recap, trail running

Oh man, I haven't had moon pies in years!! I can't even remember the last time i saw them at the grocery store. But I haven't looked for them either... I try not to keep my trigger foods in the apartment (i.e. anything chocolate lol).

I had to laugh at the Febreze makeshift deoderant...too funny!

Great job completing this race series! It really sounds like a lot of fun! I admit I am surprised they are held during the high heat of summer though!

Thank you for the compliments and the acknowledgment! I'm glad you enjoyed the Series and really appreciate DisneyBride volunteering at all four races. We designated the final race as the "championship race". That's why it was the longest and most difficult. The majority of Series Champions and Age Group Winners were determined at that event. We will work on better coordinating the presentation next year, but had 60 age group awards and over 50 door prizes to give out thanks to our wonderful sponsors!

So glad we had the opportunity to share this summer experience (and you got a great pic of the MoonPies (my favorite!!). Thanks for the shoutout!!

Oh and now that I've read the whole thing: Yes I do love MoonPies as much as you! You may have seen that when I posted my recap, my leadin was something like, "Instead of 1540 words, I could have just gone with 'WILL RUN FOR MOON PIES'"!!!! And on the Febreze, it's quite possible I have used that strategy before ... for myself and/or a family member ... I do live with a 15 year old boy after all!!!! :-) :-)

The Summer Trail Series is a great way to keep running through the summer. The tree cover does make it somewhat cooler. I look forward to running the series again next year. -DG

I had a blast! I look forward to completing the series again next year. I also hear rumors that you are looking at adding some new trails. The fun begins where the road ends. See you on the trails! P.S. Get well soon! -DG

I was happy to read that I wasn't the only one who really enjoyed the MoonPie's. The Febreze was a new one for me, but it worked. See you on the trails. -DG