How We Beat the Blerch (Virtually) 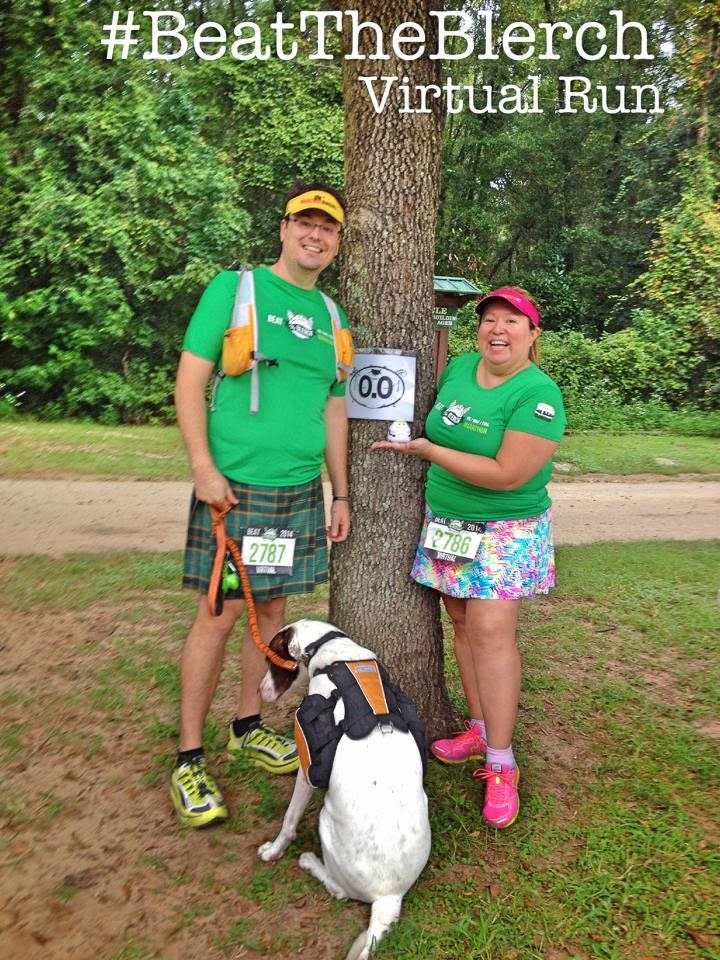 So this past weekend, there was a highly anticipated race: the Inaugural Beat the Blerch Marathon, Half Marathon, & 10K in Carnation, Washington.  Originally planned to be a marathon, the interest was such that a half and a 10K event were added in the planning stages.  Then, the race sold out in record time - faster than a runDisney event - kind of record time, so a second day was added.  And that sold out in record time.  And a virtual race option was added - and that allowed Blerch fans far and wide to participate.

Disney race events are, of course inspired by cartoon characters.  Similarly, the inspiration behind the Beat the Blerch event is a character from an online comic.  The Oatmeal is a popular digital comic by Matthew Inman.  One of the cartoonist's recurring themes is endurance running, based in part on his own experience taking up the sport.  A central character in the comic is "The Blerch" - a fat little cherub that follows you when you run. The Blerch "represents all forms of gluttony, apathy, and indifference".  For the whole story, you can find Inman's epic comic here.

The impish Blerch has been embraced by the running community. This is due in no small part to the hilarious nature of the comics themselves, but also to what the Blerch represents - the little devil on your shoulder:  tempting you with fatty, salty, sugary snacks, and encouraging laziness. 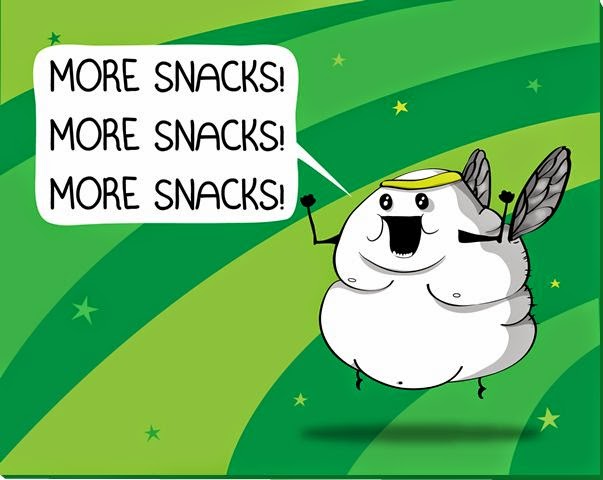 We were unable to get to Carnation, Washington for the Beat the Blerch race.  But we were thrilled when a virtual run option became available. This allowed us to Beat the Blerch, right in our backyard.  We were not the only ones in Tallahassee to sign up. We found a Facebook event for a locally organized Blerch run. It would be run on Sept 20th - the same day as the actual race in Carnation, Washington.

Race day approached and our packets arrived: tech shirt, stickers, magnets, a 'squeezeball' Blerch, a bib, and a really adorable Blerch medal.  Because we would be missing out on the cake, Nutella, and other snacks at the Inaugural event, they even included gummi bears and cupcake lipbalm - so we wouldn't feel completely left out.  As far as virtual runs go, this was excellent swag. 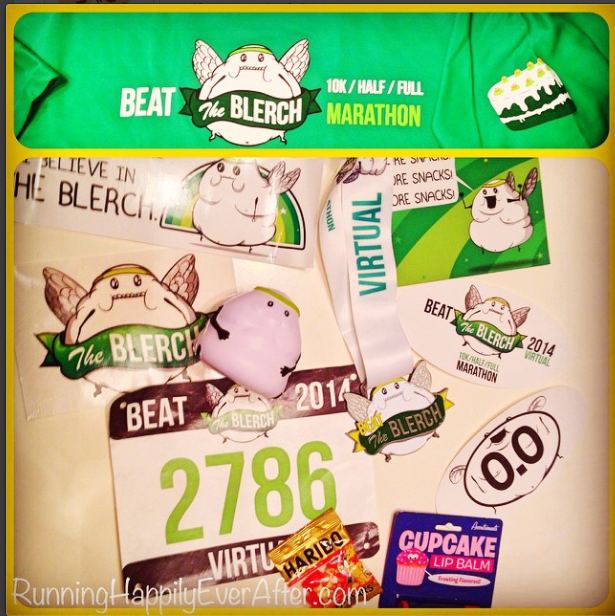 Race day arrived and we set out to meet our fellow Beat the Blerch runners.  As we arrived at the designated trail, a child's birthday party was being set up in the adjacent playground.  You know birthday parties mean one thing:  Birthday Cake!    The Blerch was hard at work here: encouraging us to do a run by and snag the cake. But in the end we decided against it.  But only because we brought our own!

The organizers laid out three courses: a 5K, 10K and a 12K.  There were no other takers on running a half (or full)  so I decided to run the 12K. The routes were all well marked on one of our favorite trails: Lafayette Heritage Trail at Tom Brown Park. 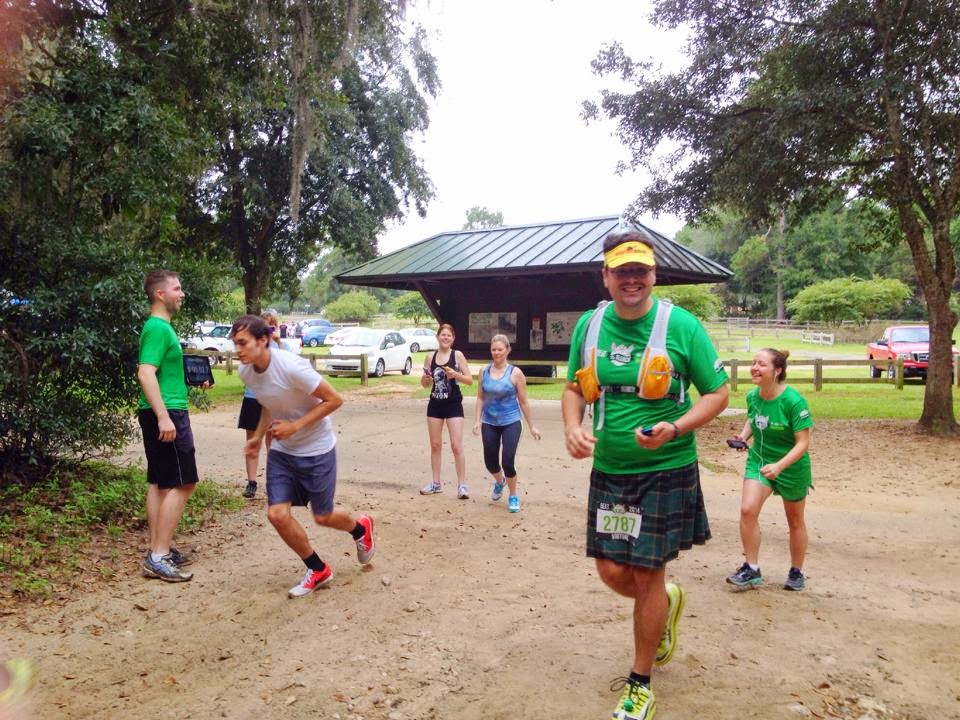 Before the start, (in true Blerch fashion) they told us cookies would be available at the finish.  DisneyBride and I had brought some Blerch-approved fuel/recovery snacks to share.  I didn't fuel with one, but I did have a Zinger at the finish later, and it was delicious.

Our puppy, Magnus the TrailDog made his race debut!  He ran with DisneyBride and she said he had fun.  Perhaps a bit too much as he was extremely excited to run with a bigger group than usual.

The organizers were kind enough to have a timer at the start/finish area. They also provided a water station at the 2.5K mark. Having course support like this was fantastic!

Super awesome Blerchy touch from the organizers: at the turnaround for the 5K, they kept telling everyone they had run enough and we should just stop running.  They also notified us that they would be happy to give everyone a ride back to the cookies at the finish line.  Why run when cookies are waiting to be eaten? 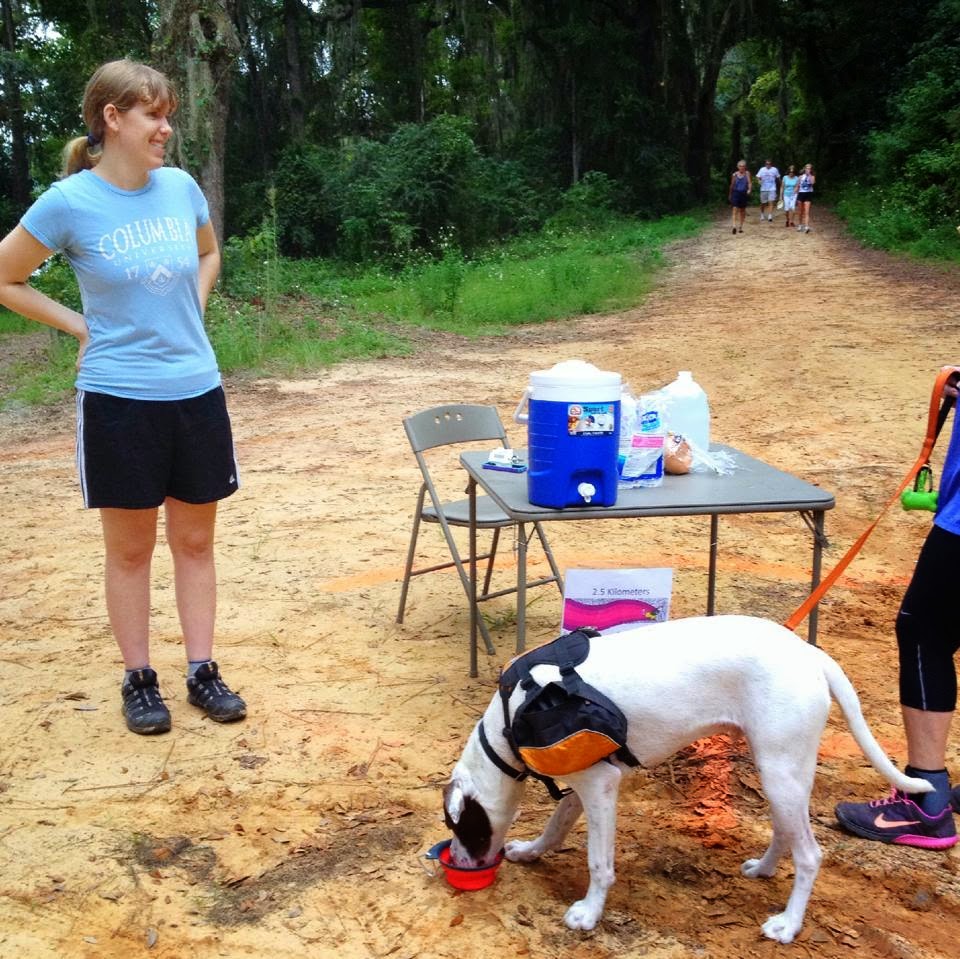 DisneyBride ran with our friend Michelle.  They covered 4.5 miles of the trail.  Since I am in the middle of training for the 2015 Dopey Challenge (48.6 miles of runDisney awesomeness), I had planned back to back training runs this weekend.  Of the three distances offered I decided to run the 12K, which would pair nicely with the 13 mile run the following day.  This Beat the Blerch virtual was a great way to get in some back to back runs.  I had some blistering from my shoes, but other than that, I crossed the finish line feeling pretty good, and of course - hungry for cookies and cake.
﻿

This is most of the group from Saturday, a few of the 5K runners finished early and are not pictured here. 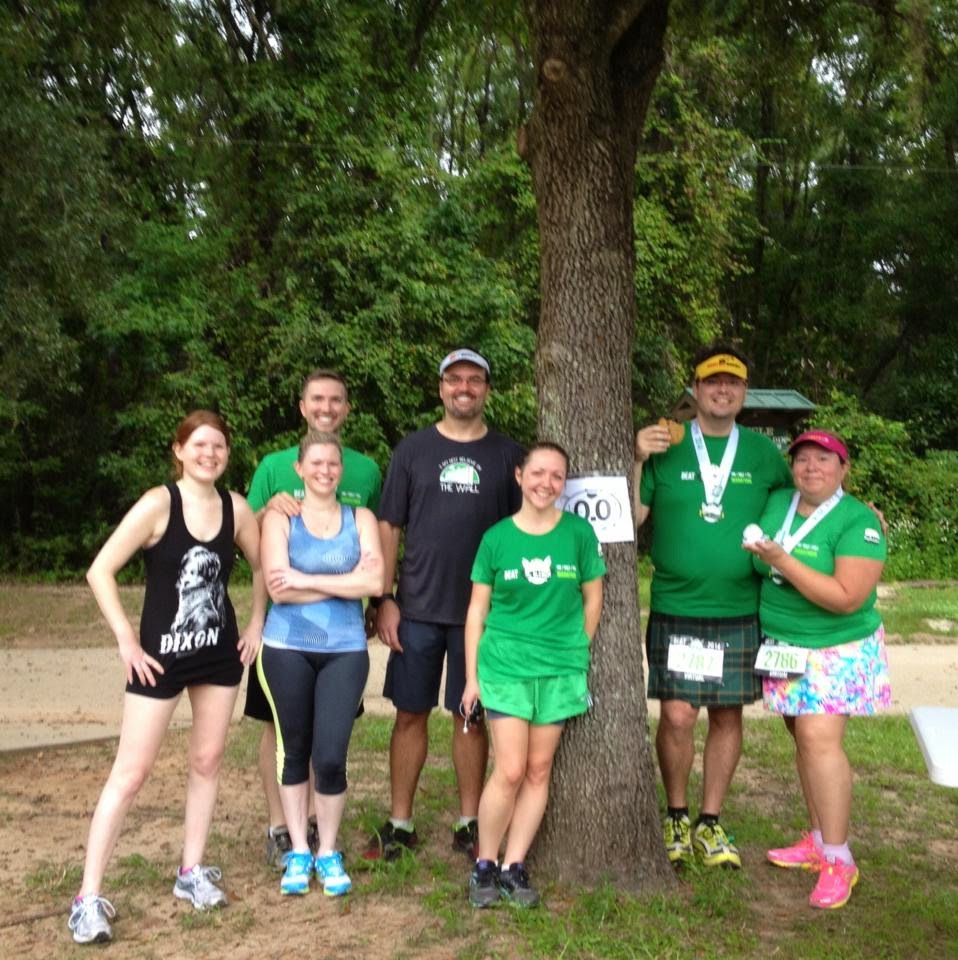 After we finished up at the park, we headed to lunch with a friend.
Blerch Bling was proudly worn.  Cold beverages were enjoyed. 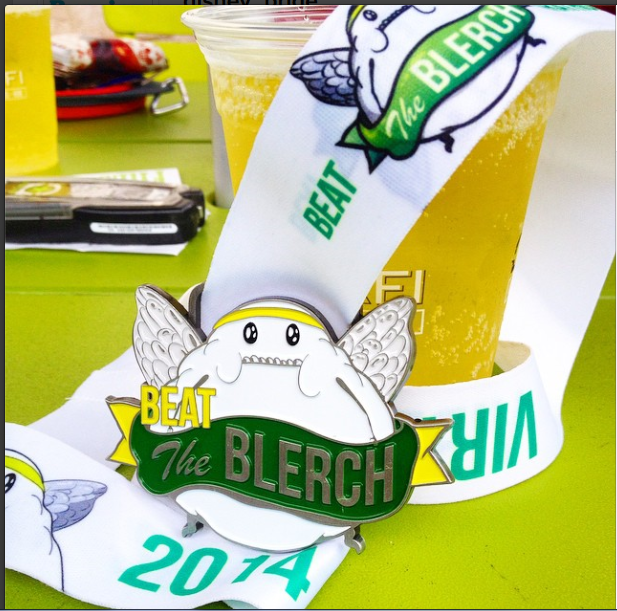 And yes, DB even got me my very own  magical purple drink. 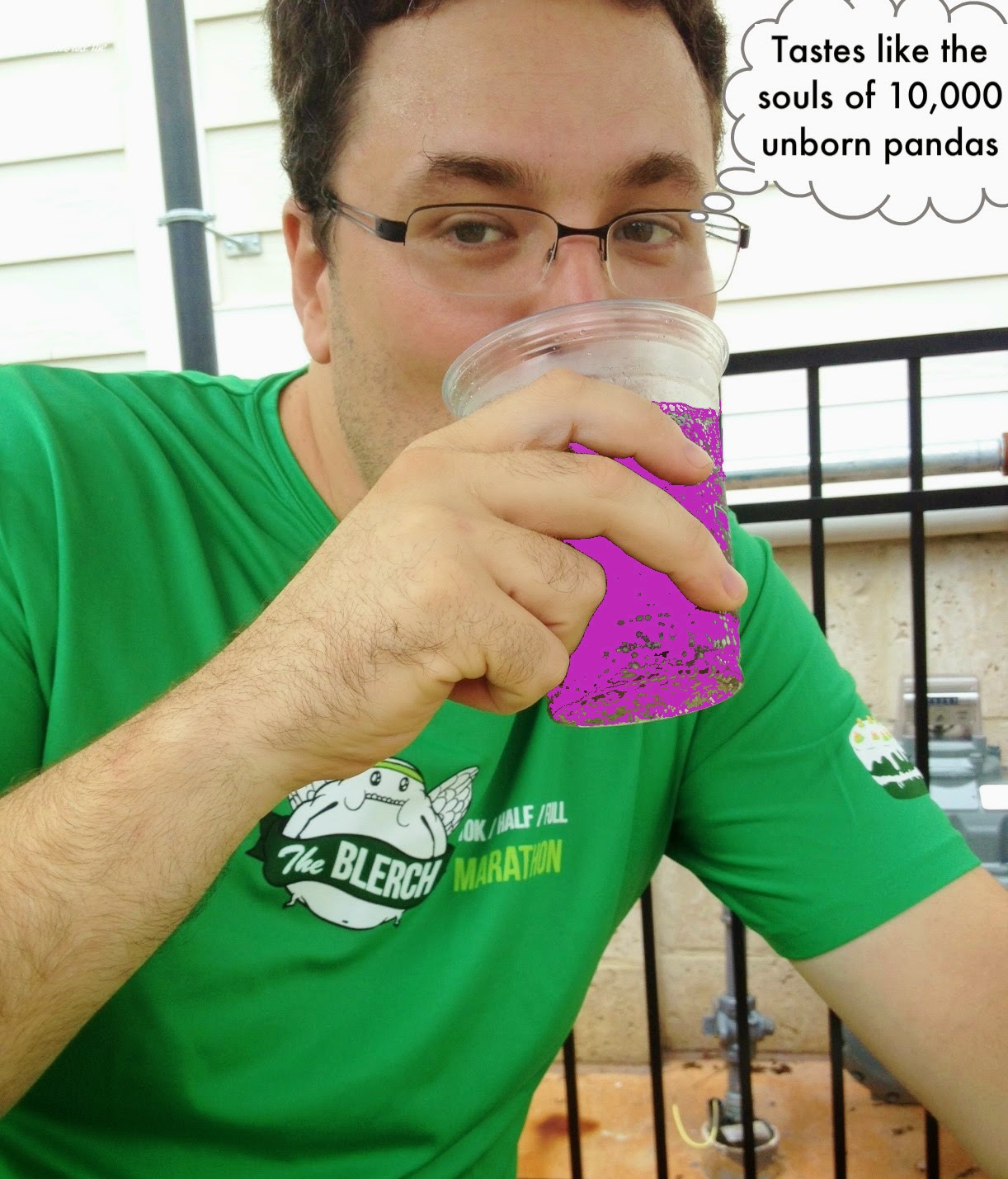 We have heard that Beat the Blerch is expanding next year to the East Coast, so we are keeping an eye out for that.  If not, it would be great to run with the group again next year.  I may even come up with a Blerch suit to wear.

See you on the trails!
~ DisneyGroom

Are you a fan of The Oatmeal?

What is your favorite post-race snack?

Have you ever run a virtual race?

I've never heard of any of this, cute race though! I think it's great that your pup ran with Disney Bride! I'd love to run with my dog in a race but I am afraid she would be a hazard to the other runners! She's a Labrador and doesn't always run in a straight line! I have done a few virtual races before, but never in a group like that. I would prefer to run with more people, I think that would be more fun! ~M

Rebooting Myself mod
8:54 AM

Love it! I did the 10K last weekend for the Virtual Race as well. I enjoyed a 1/2 slice of Cinnamon Crumb Cake. It was awesome! Glad y'all had a great run!

Hahaha I love this! The Oatmeal comic just cracks me up and I love that they actually made a race based on it! I also think it's really fun that your area actually took the virtual race and carved out an area to run for everyone who signed up. Really speaks to the popularity of the comic! I'll have to sign up for this next year!

I had wanted to do this virtual race (I couldn't get to Washington either) but I was so bummed it was sold out by the time I got to it! So much awesome swag! I hope it comes to the East Coast, that would be awesome!

LOVE THIS!! So wish I had gotten the virtual race packet. I also have my fingers crossed for an East Coast race next year...maybe I'll see you there :)

I can't believe I missed this! I found out when I went to the park to go for a hike on Sunday afternoon (found the sign with the Blerch on it). Is there a mailing list or some way I can be notified if/when this happens next year? I already emailed the Oatmeal address, but thought i'd hit you up as well. Looks so fun and the runners bags were FILLED with great swag it looks like. So Jealous.

You definitely need to read the comic. Here is the link- http://theoatmeal.com/comics/running
Perhaps you could just walk a 5k with your dog. -DG

Just a half slice? You deserve the whole cake! -DG

I had underestimated the popularity of the comic as well. I hope that the race makes an appearance somewhere convenient for us to travel to. -DG

The chocolate chip cookies were great! It was definitely the best swag bag of any race I have participated in. I hope it makes an appearance here in FL. -DG

If it is somewhere relatively close to me, I will be there. Lets keep hoping. -DG

Check out the Facebook page for Beat the Blerch- Tallahassee. I will be sure to tweet the next years event as soon as it is announced. Follow me at https://twitter.com/Disney_Groom -DG

I see the packets are on sale again for this year's run. Will Tally be in it again? :)