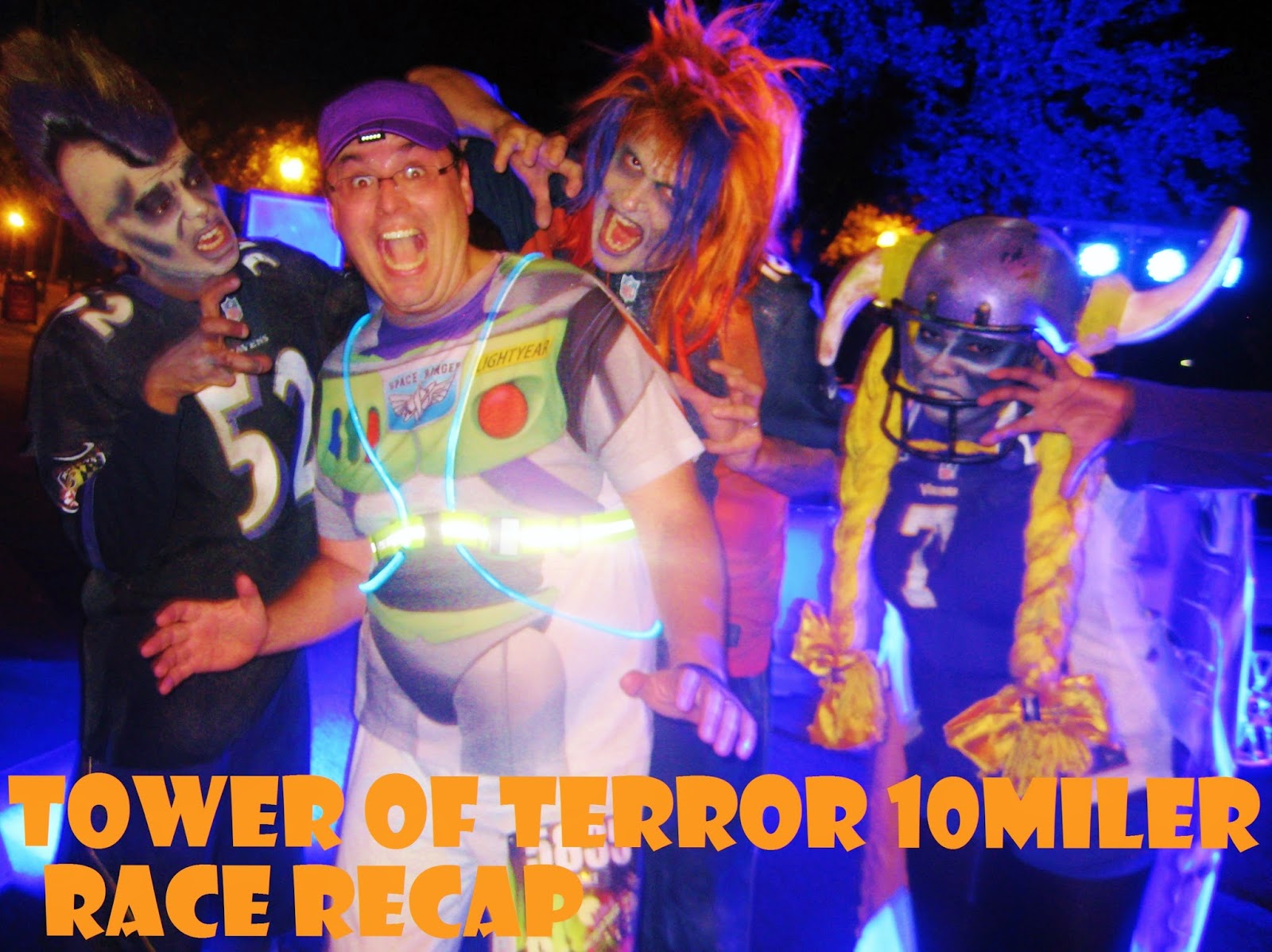 Let me start this recap with a couple of things you should never do just before a night race.
DO let your spouse/partner/BRF talk you into a last minute race.

Ok, the weekend may not have had the most ideal beginning. But we had so much fun at the 2014 runDisney Tower of Terror 10Miler and Villains Bash, that all that was quickly forgotten.

Do get dressed up.  It should come as no surprise, I was dressed as Buzz.  DisneyBride tried to put together a Tron Legacy costume for me, but we had no idea finding reflective tape would be so difficult.  So my good ole stand-by just happened to be available for race day.  One day I will be an old man, and I will look back at all my race photos and not know which race was which - since I am dressed as Buzz in half of them.  ha ha.

I also strapped on my NoxGear Tracer 360 vest.  If you recall, DisneyBride wore the light up vest during her 5K and 10K events during Princess Half Marathon weekend this year.  With the Tower of Terror 10 Miler starting at 10pm and the after party continuing until 3:30am, it wouldn't be a bad idea to assist my visibility.  As it turns out, a lot of runners had the same idea, and I spotted several NoxGear vests on the course.

If it's not readily apparent, the ToT trip was a very last minute addition to the race calendar.  I didn't even get a chance to check out the road closures.  Thankfully, runDisney had plenty of traffic signs to detour us to WWoS.

After a quick bus trip from WWoS to Hollywood Studios we arrived at the race.  The starting area always has a really cool atmosphere.  The DJ got everyone pumped up, playing "What does the Fox Say?" --- perhaps one too many times for me  (DisneyBride still can't stop singing it three days later) and also they also did a good job making announcements to make sure all the runners get to their corrals in time.


This starting area seemed far less crowded than previous runDisney events.  The official results show 9389 finishers - and the word is that there were 800+ runners swept.  So with less than 11,000 starting (half the size of the WDW Half and Princess Half) this felt much smaller to me.

We've made so many 'runDisney' friends, we can never catch up with all of them.  And we are very sorry to have missed seeing some of our blogger friends, including Meranda, Pam & Christine, and Kimberly - to name just a few. However, we were fortunate to catch up with several of our running friends before the race and even to make a few of the pre-race photo meet-ups.


There was a bit of a hike from the corral to the starting line, but soon enough we were off, and I was running my first ToT race.  The weather was great; not a drop of rain (it had been forecasted to pour cats and dogs all week) and the temperature was great (felt like high 60's).  Apparently, the temperature has been an issue in previous years.  RunDisney prepared for the heat this time. In addition to water and Powerade at the start and finish line, the course had 7, yes seven fluid stops, plus cool wet towels at the finish.

The race was packed with pretty cool theming.  It seemed like at least every mile they had some sort of character, DJ, or creepy giant spider on the course.

The lines were not bad at all - so I stopped for quite a few characters.

My only complaint about the characters- no Zurg.
Seriously though, WHERE IS ZURG???
I didn't see him on the course or at the "Villains Bash".
I guess he is hiding, since this is what happened last time we met. 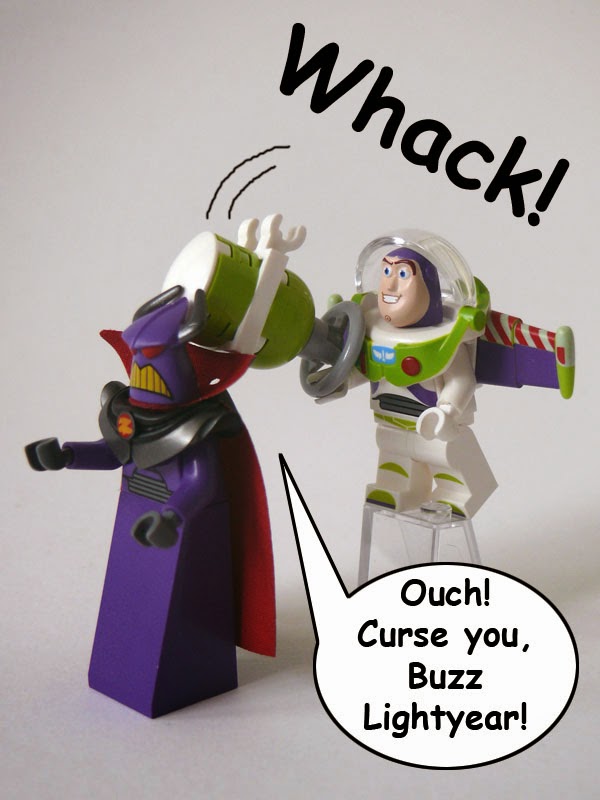 The offroad portion (or trail) into the ESPN Wide World of Sports complex has caused some runners issues in the past.  DisneyBride had warned me that it was pretty dark last year and she convinced me to wear a small headlamp (it was clipped to my visor). RunDisney actually provided plenty of lighting along the path this time, and never did I need the headlamp or any additional light.

I had hoped that they would have used the space in WWoS to have the Headless Horseman or perhaps some roaming zombies.  Just seems like the fields and the track could have been used for characters.

This is past the halfway point of the course, and the Grave Diggers were on hand - ready and willing to bury any runners who couldn't finish the race.


Following the WWoS, you make your way back to Hollywood Studios.  The last mile or so of the course leads you through the very short portion that is actually in the park.  I enjoyed running through Hollywood Studios, and only wish there was a way to increase the portions that we do run.

It was nice seeing Lotso outside of Toy Story Mania!

I told Lotso to save me a spot in the queue.  But he didn't.  Don't trust a bad guy.

As pointed out by @dopeyrunr, Lotso did NOT smell like strawberries.

The backstage finish at the Tower of Terror is great.  You get a great view of the hotel and the ToT sign as you approach.  I wish I had stopped to take a finish area pic with my medal.  I guess I need to add that to the "to-do" list for my next ToT race.  The ToT medal with the moving elevator may just be the coolest in my collection.

This guy gave me my medal. We just love our race volunteers! 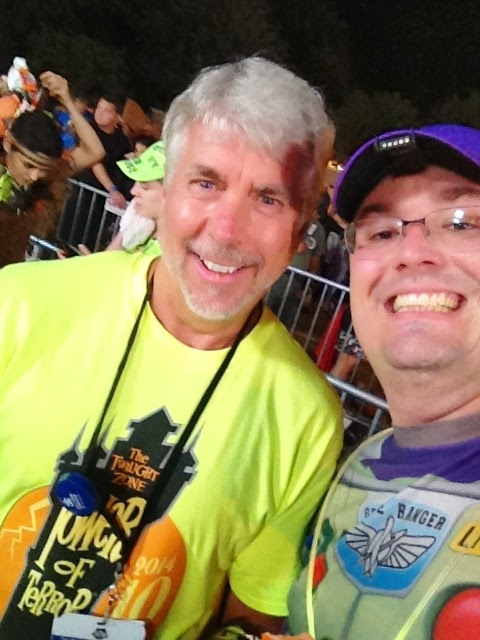 And speaking of volunteers, after crossing the finish line, I bumped into a few running friends helping out at the event. Caitlin from the Magic Milers was working the finish area for Trackshack, and Elizabeth (pictured)  was handing out bananas. 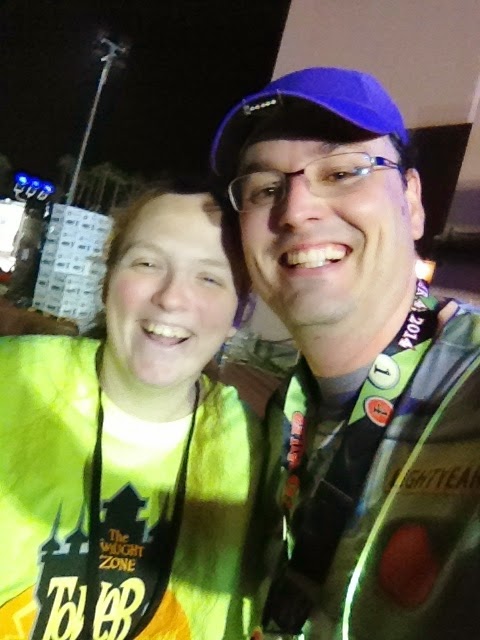 After collecting my snack box (still waiting for Tonga Toast to be offered at the finish line by the way- ahem), I hiked my way over to the Villains Bash after party.

DisneyBride will post a recap of the Villains Bash.  The highlight for me was I was able to ride Toy Story Mania (with only a 15 minute wait!!!) and I was champion of my car.  That's a win in my books.

I really enjoyed this night race - a lot more than I expected.  Count me in for 2015!


Have you done a night race?

What are some of your takeaways?

Great recap - thanks for the shout-out. I missed Toy Story because we were saving it for later, and then it closed early (3am). Great reminder of the actual camera vs. iPhone camera. I forgot about that. I like to live tweet the race, though, so it's hard to do both regular camera and iPhone.

I love your commentary! Wow, I had no idea how many runners got swept! That seems like a lot for such a smaller race. I often wonder how many runners start the race and how many actually finish. Where do you find that info? This was my first TOT too and I thought it was fun. Looks like it will be on hold for 2015 though.

Great recap Walt and I am so sorry we missed you and Monica. The race was really fun and now that it has been cancelled for 2015 I am SO glad we managed to run it this year, our one and only time. I love your photo with the gravediggers....we enjoyed the characters but did not take any photos while racing. We realized due to course crowding that there would be a number of runners swept, but that number is huge, especially considering the cooler weather.

Great recap and pics - I especially love the one with you and the grave diggers! I loved this race last year and I would have loved to do it again this year! Will I be seeing y'all at wine & dine next month? :0)

And holy cow, 800 people were swept? That seems like so many!

Wow! How fun and you have a great way with words!