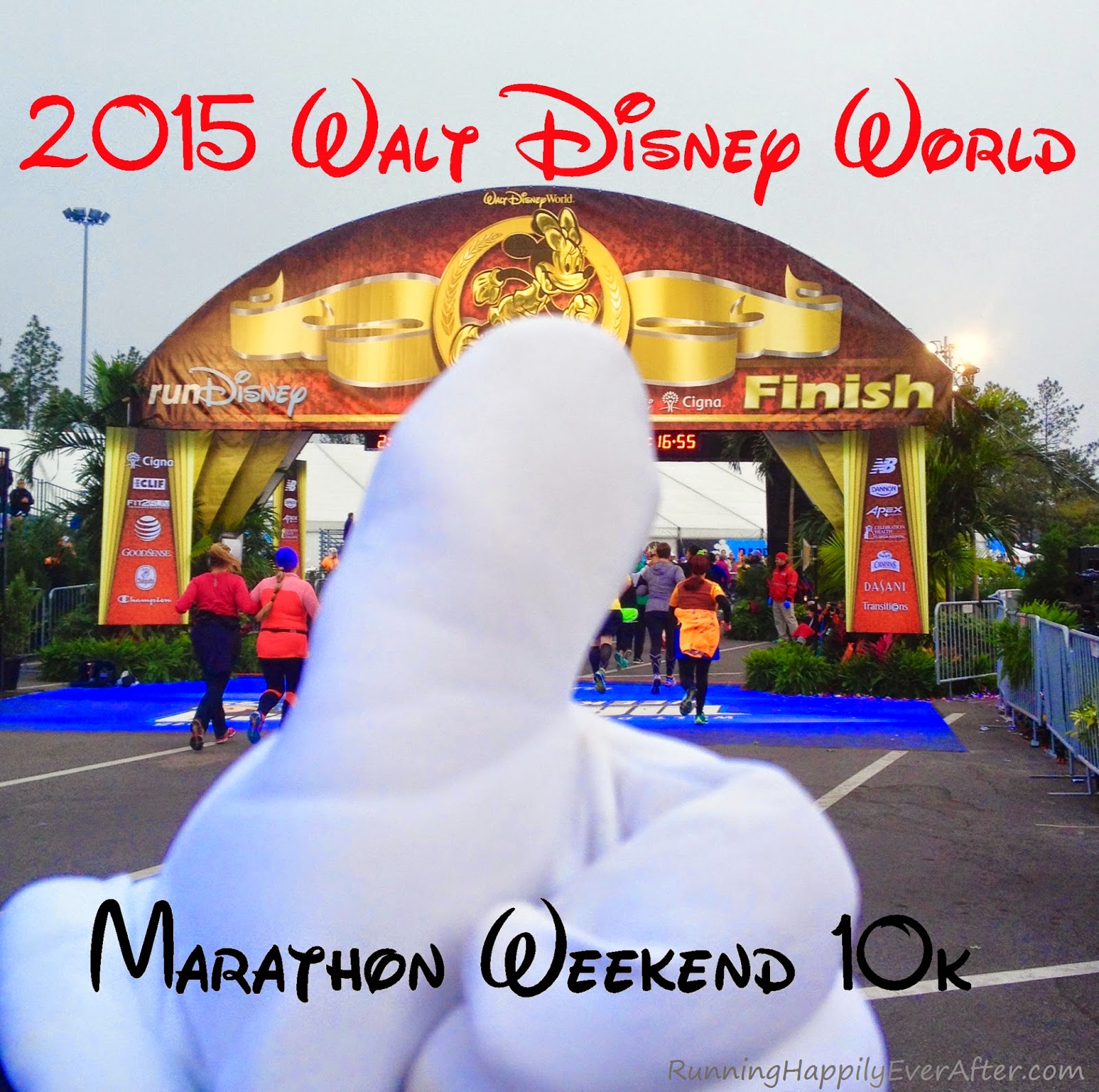 After a very cold 5K the day before, we were extremely thankful it warmed up a little.  However, it was still a lot colder than anticipated.  So adjustments were made to our costumes.  Disneygroom added a tech sweater under his X Racewear shirt;  DisneyBride added a fleece jacket.  The 'throwaway' sweats people usually tossed at the start were worn the entire race.  Everywhere you looked, stylish running gear and elaborate costumes were sacrificed and covered under multiple layers. 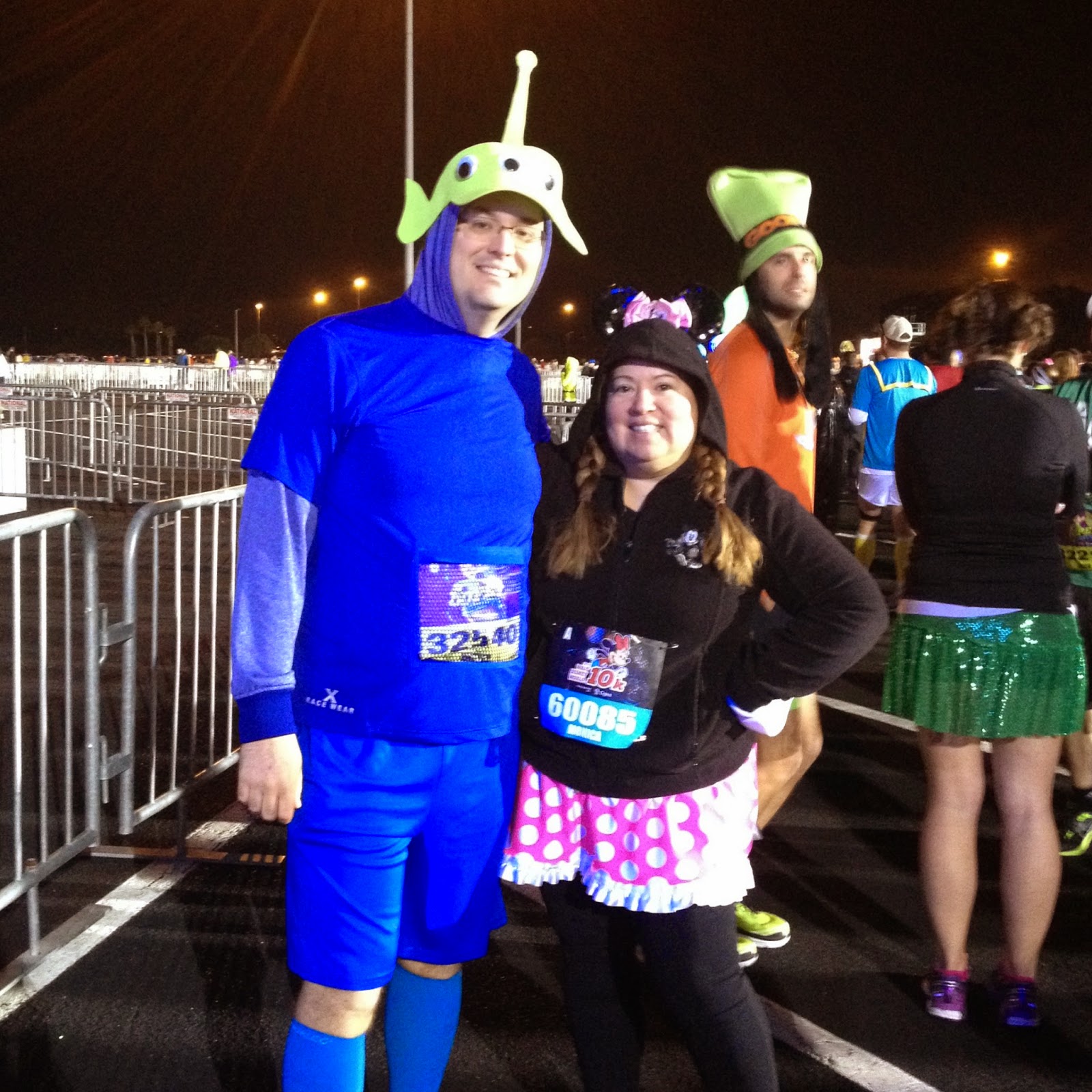 Again, we caught a later bus.  The few extra minutes of sleep and staying out of the cold were extremely nice.  While I live in North Florida where it does get quite cold, I am still a South Florida boy at heart.  I have no tolerance for the cold. DisneyBride is from Washington DC originally, and she grew up with snowy winters, but years of living in Florida - she has lost all her tolerance for lower temps. 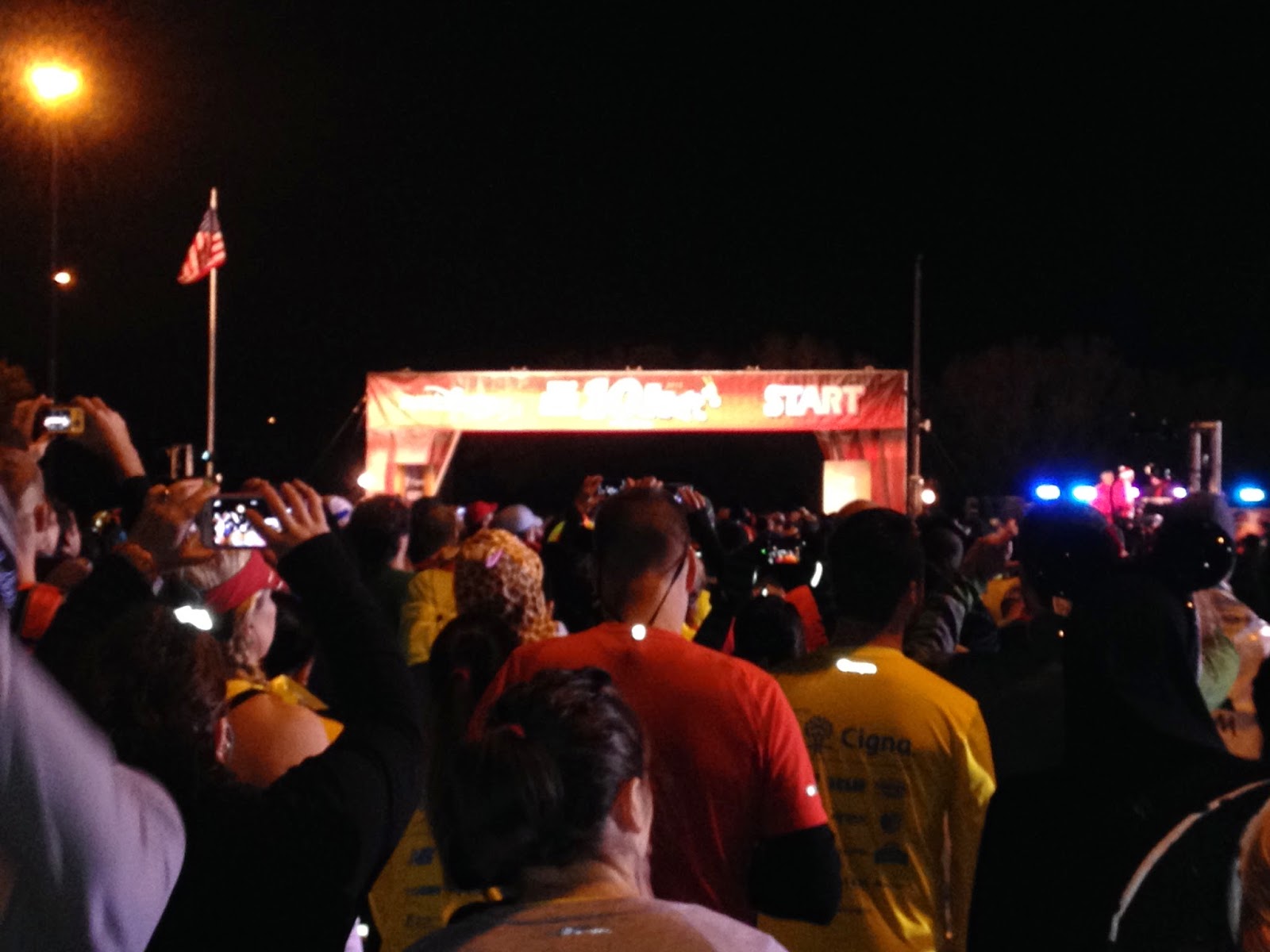 Just like the 5k, it appears that runDisney has added some more time between corrals.  I found that for the 5k and 10k, this makes for a far less crowded course.  Many people will disagree with me here, but... while no one likes to wait around in the corrals, I actually this leads to a far more enjoyable run, as it greatly reduces crowding and bottlenecks.

Anna and Elsa from Frozen reminding us why it's cold. 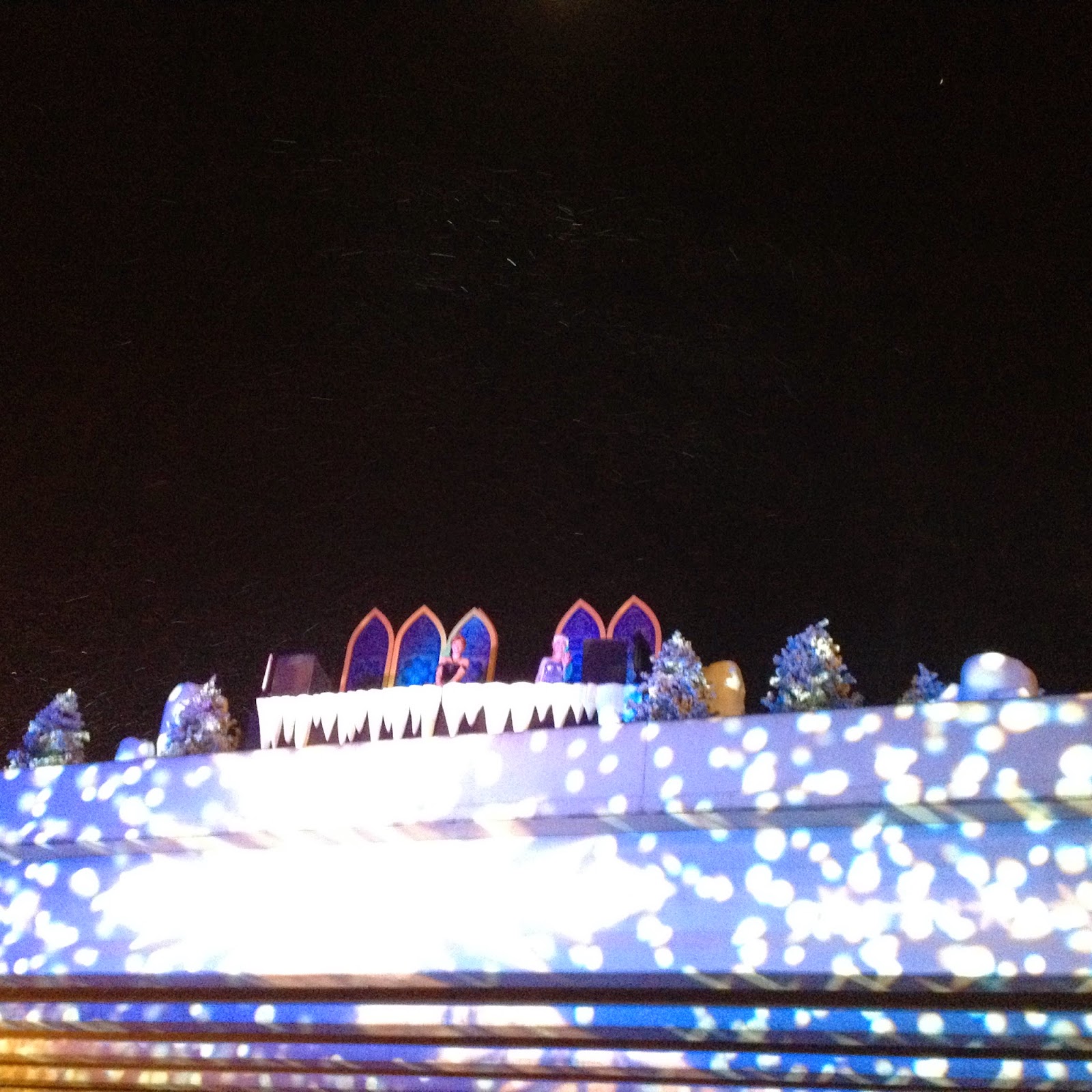 The 10k course was like the Inaugural race last year.  I think this one did have a minor change, running a slightly different path through Future World before exiting the park.  Though we both started and ran separately, we found each other again once during this race. 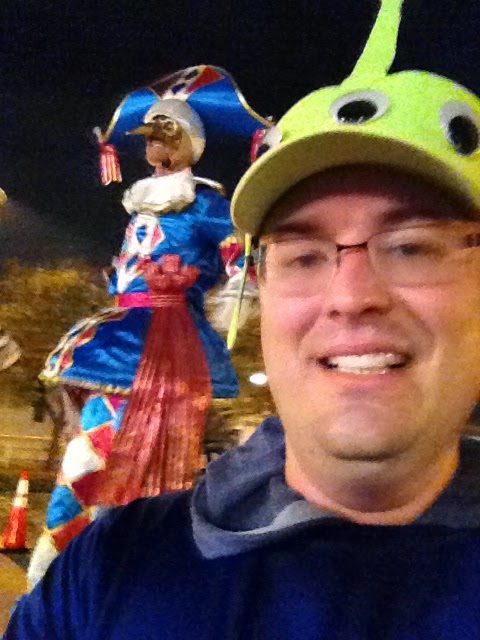 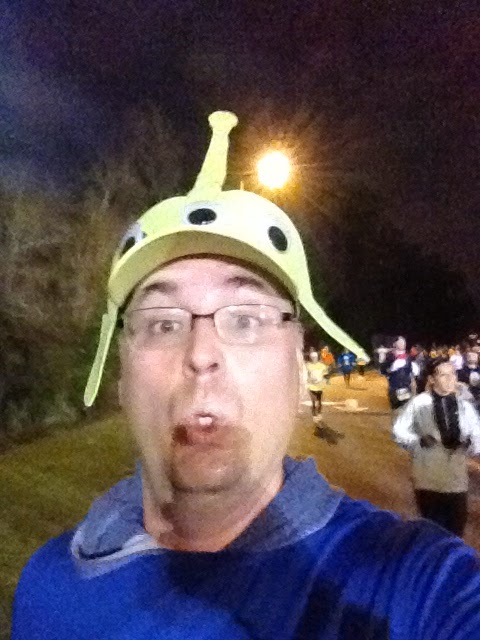 Even though we just heard the fireworks signalling the start of the last corral, the sweeper buses (labeled Parade Bus) were already waiting in the same spot as last year, at Mile 2.75 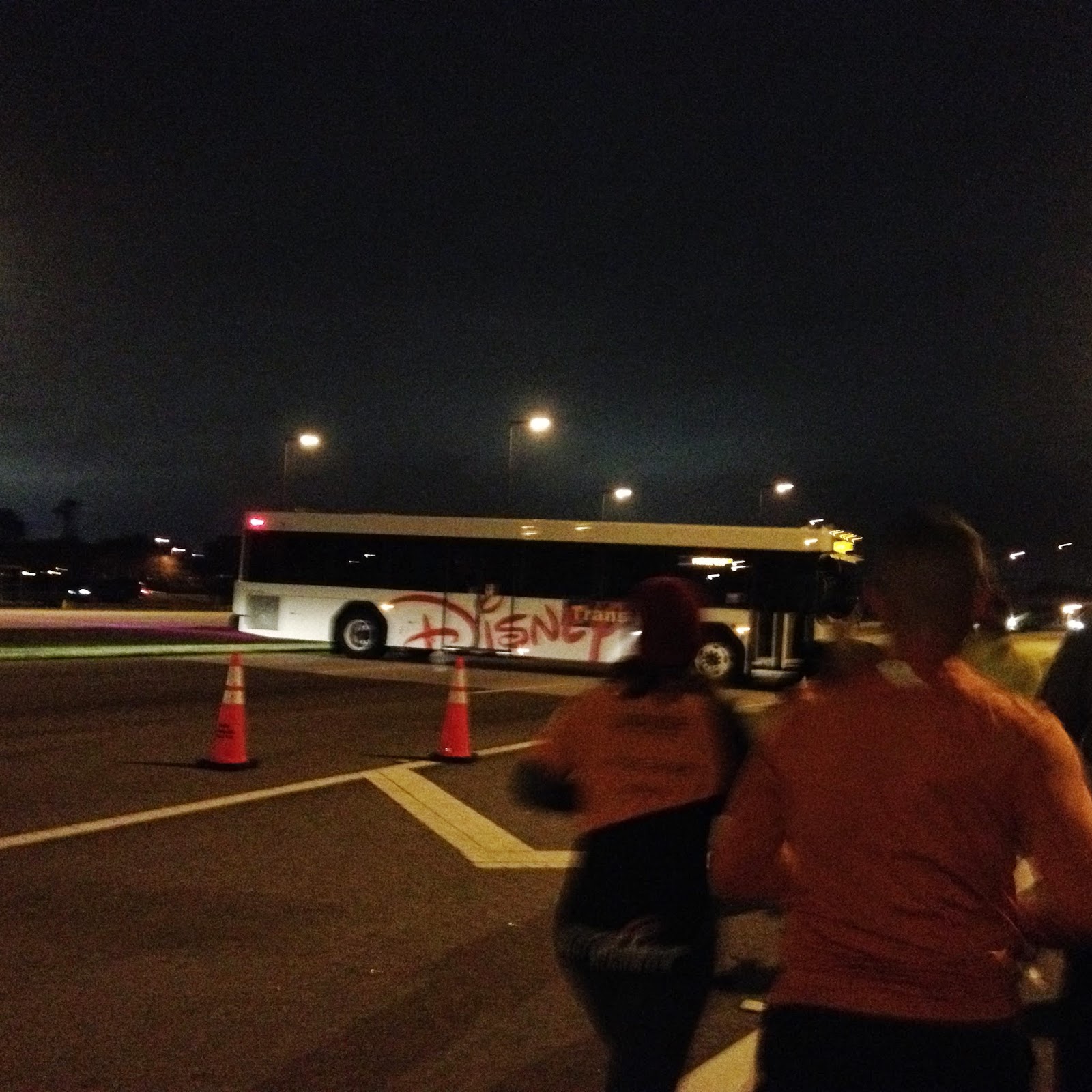 As far as we can tell, from the 2014 WDW 10K, the 2014 Enchanted 10K, and this race (all run on the same course), this was the last pickup spot.  Right after this, we are in the backlots of EPCOT, and then the course heads into World Showcase, then onto the Boardwalk, and back into EPCOT.  We haven't heard of any sweeps after that 2.75 mile mark, and there doesn't appear to be roads in the second half of the course that will accommodate a bus anyway.

Glad to report we spotted no balloon ladies or sweepers that day.


We each stopped for a few photos in the World Showcase and the Boardwalk, but it was just too dark - and most of the phone pics didn't really come out.

DisneyBride did grab this one of The Genie though...  There was a pretty long line, understandably so. We really miss Robin Williams...  may he Rest In Peace. 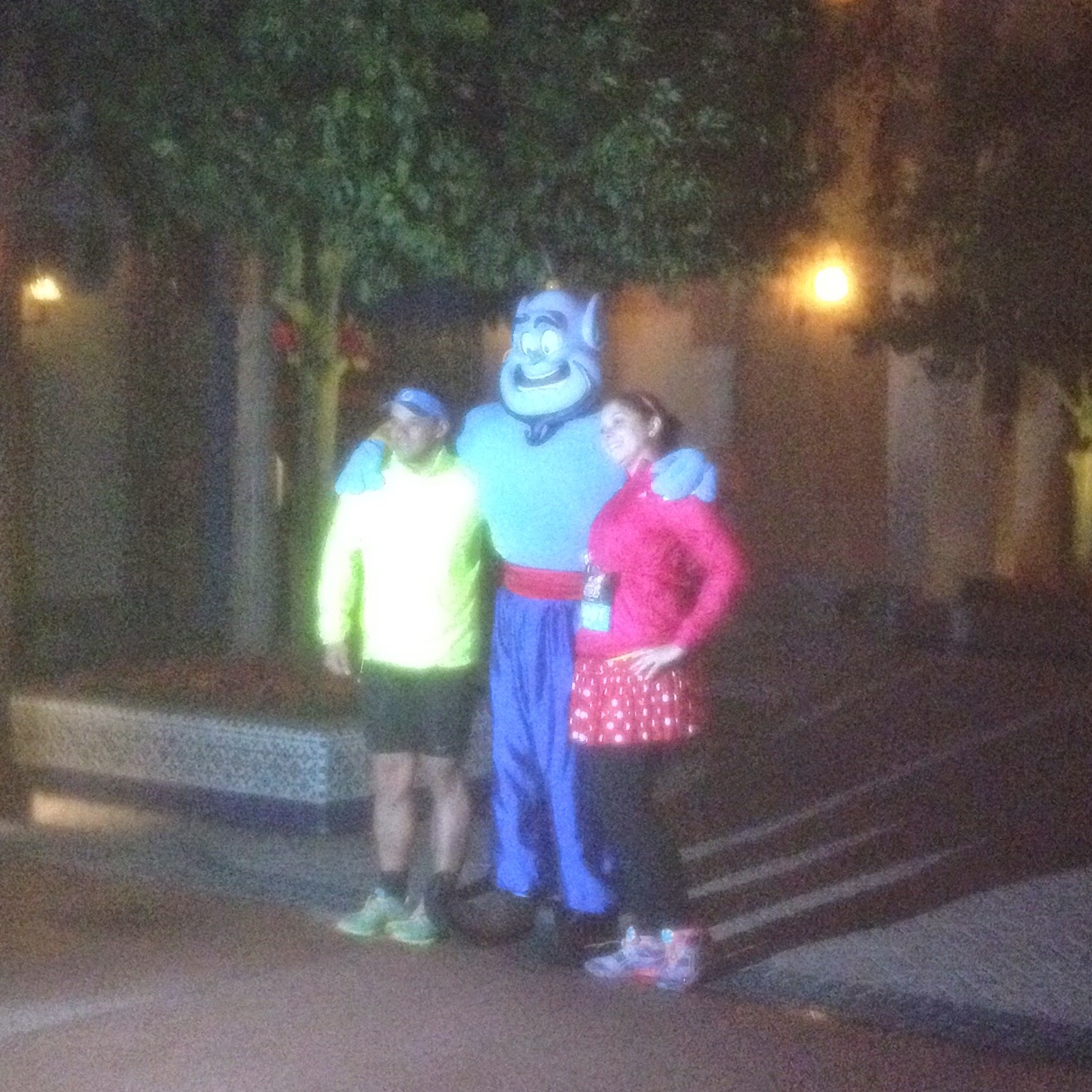 From memory, the course appeared to have just about the same amount of entertainment as last year.  One really cool addition was Sports Mickey at ESPN this year.  While I was looking forward to Sports Goofy, it was really cool to see Mickey in his football gear. 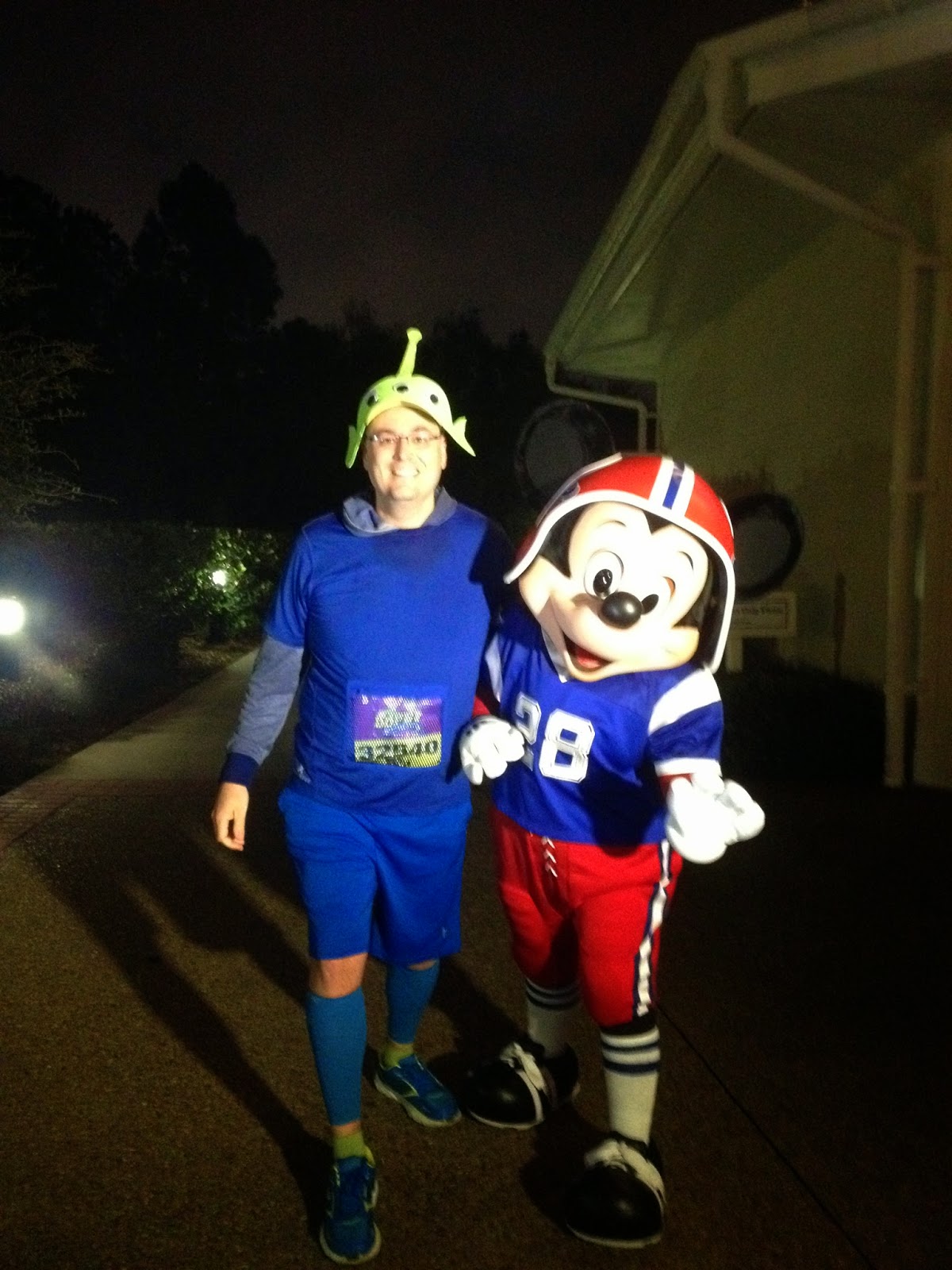 This is the from the bridge that connects the Boardwalk to the Yacht and Beach Club area.  It was foggy and misty - but no one really seemed to mind. 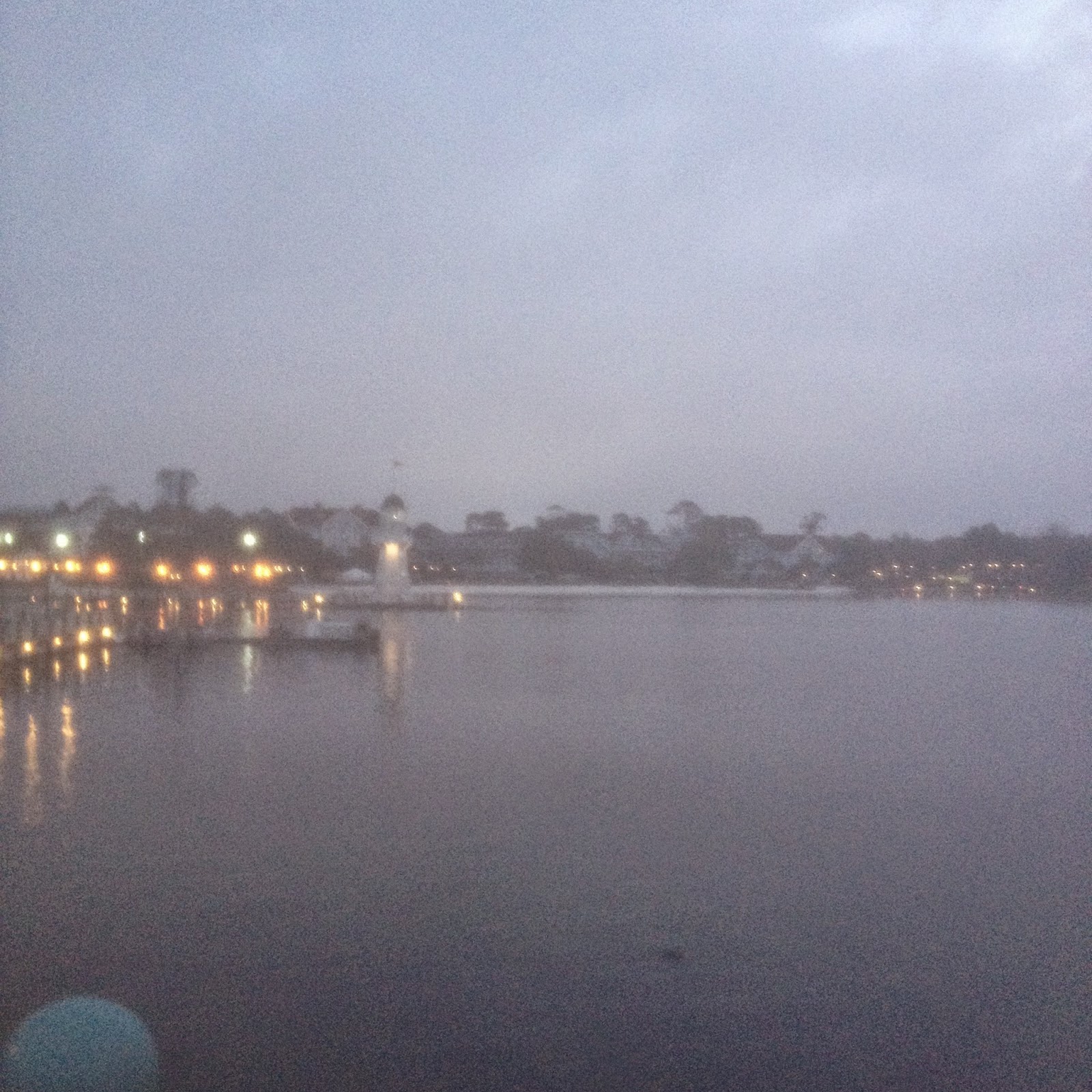 Heading back into EPCOT, these guys had a really long queue, but DisneyBride just had to stop for a photo. Or did she just want to flirt with Chip?  Probably both. 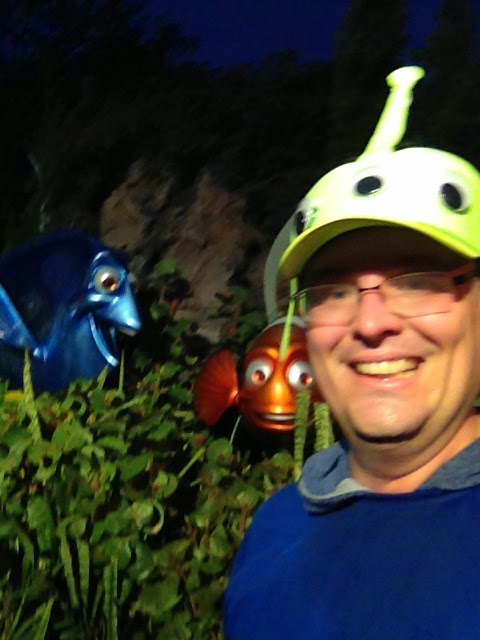 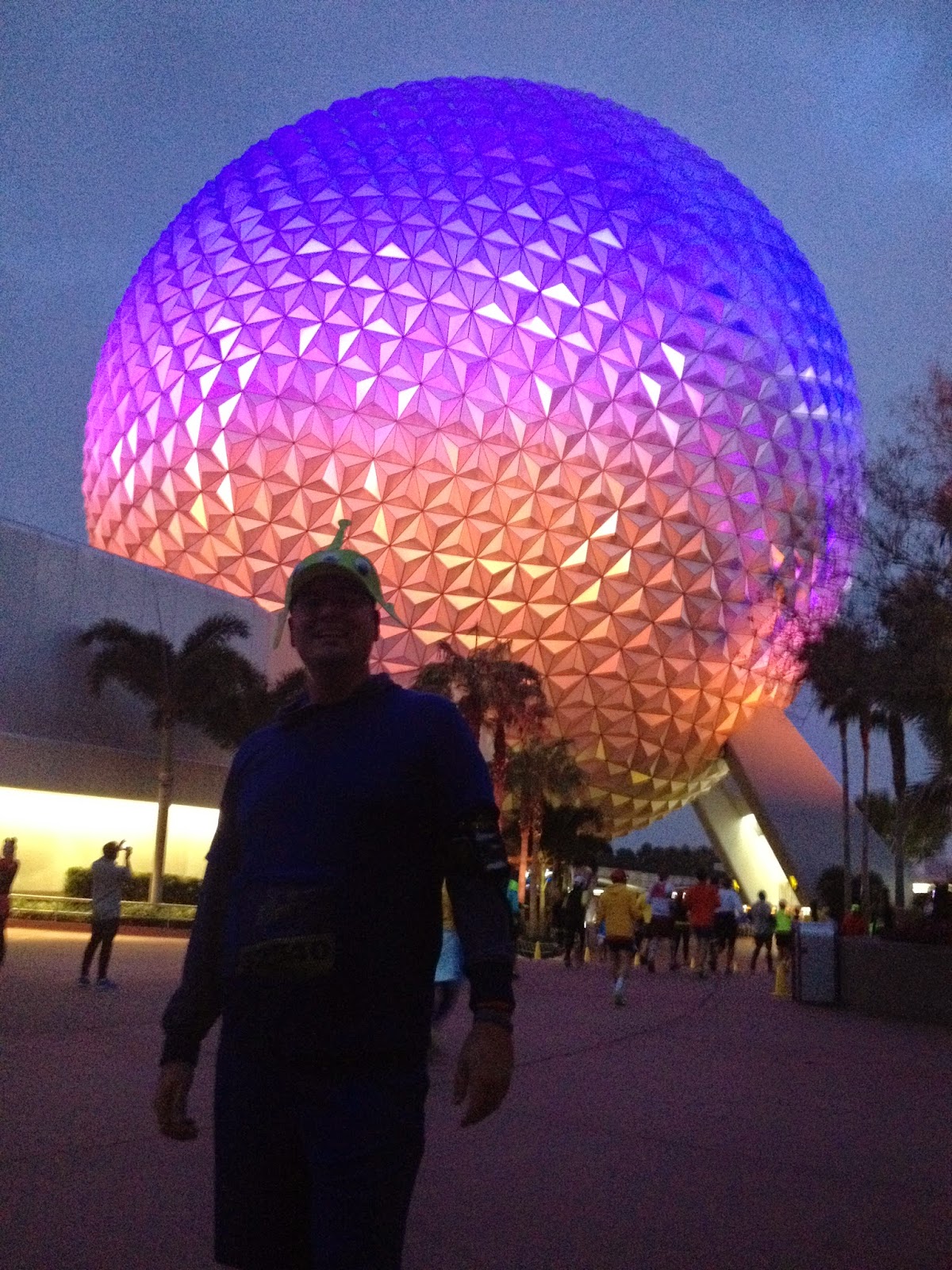 Finally around that last turn, the one we all know and love so well (where the choirs are singing during the half and full). These guys were there. 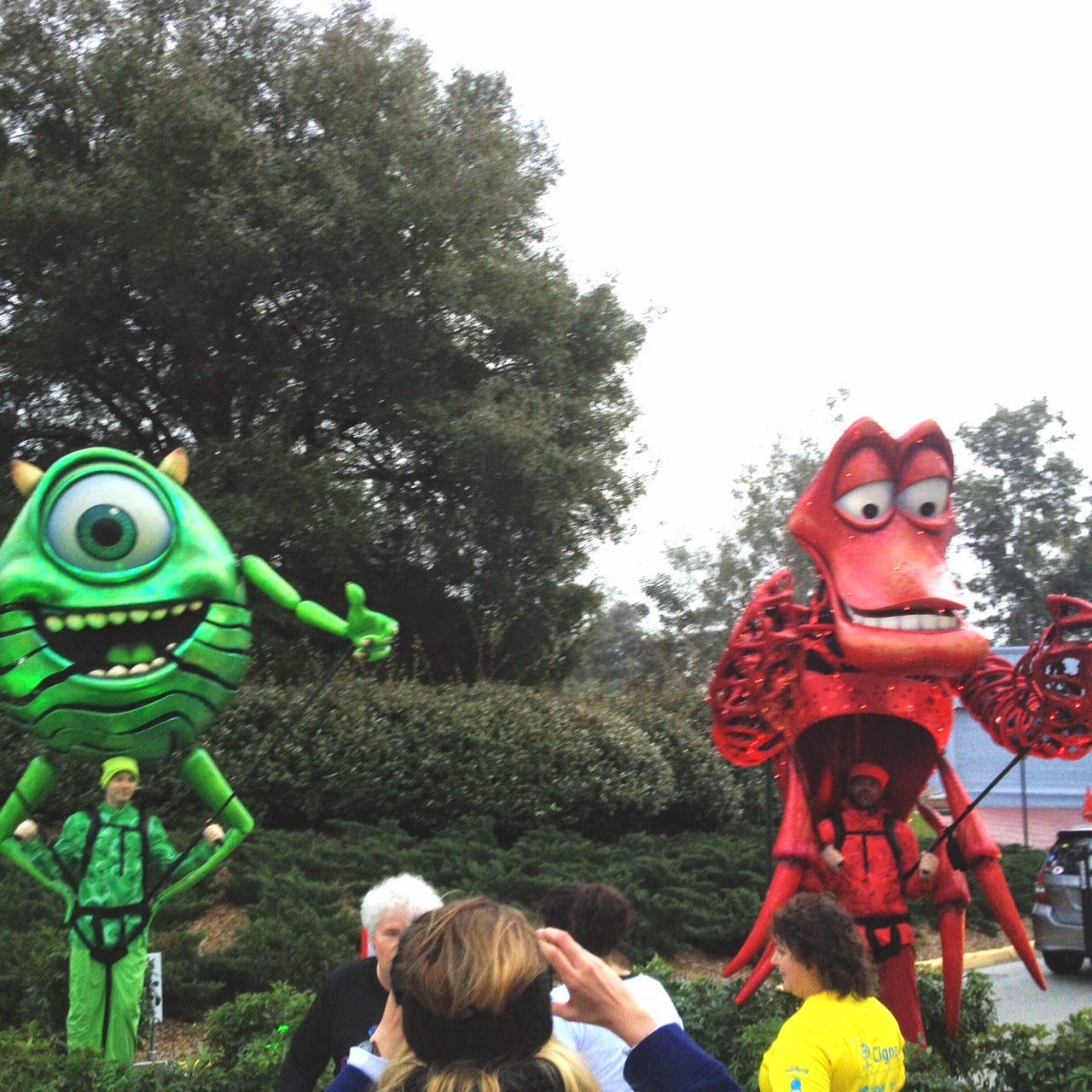 And at last - the finish! 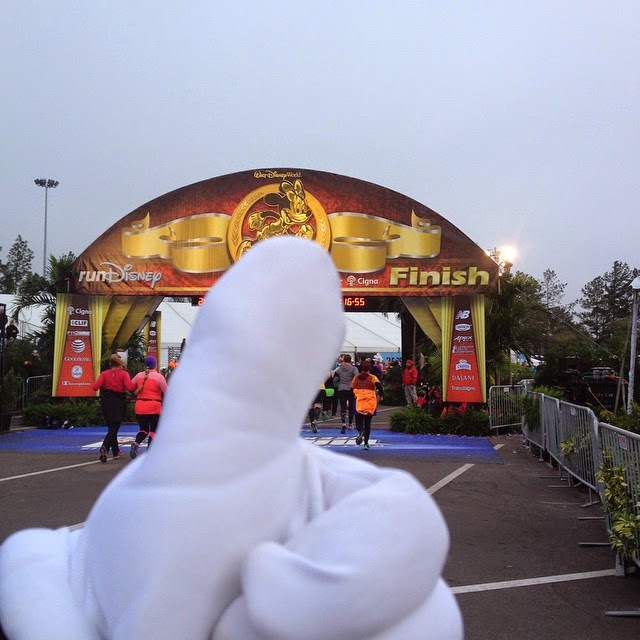 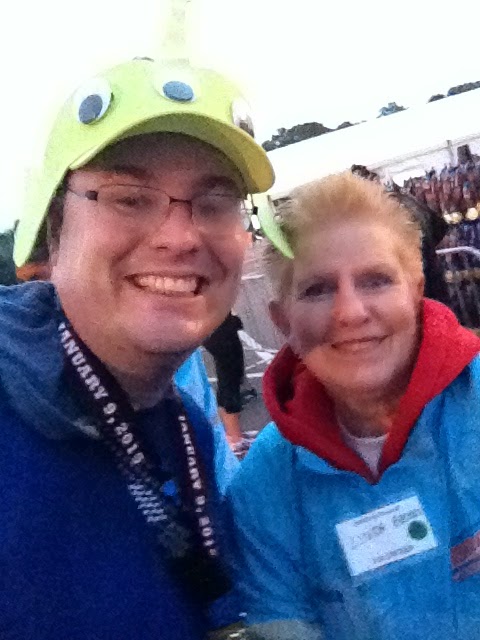 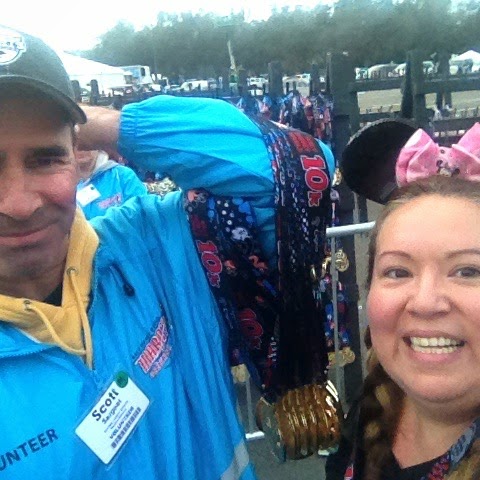 Gotta love our volunteers!!!  Standing there for hours giving out medals to sweaty runners.  They are amazing!

DisneyBride spotted the therapy dog from the 5K again.  Once again - dog and human both dressed as Minnie Mouse, but this time in red.  Cannot get over how awesome it is that the dog had her own bib and medal! 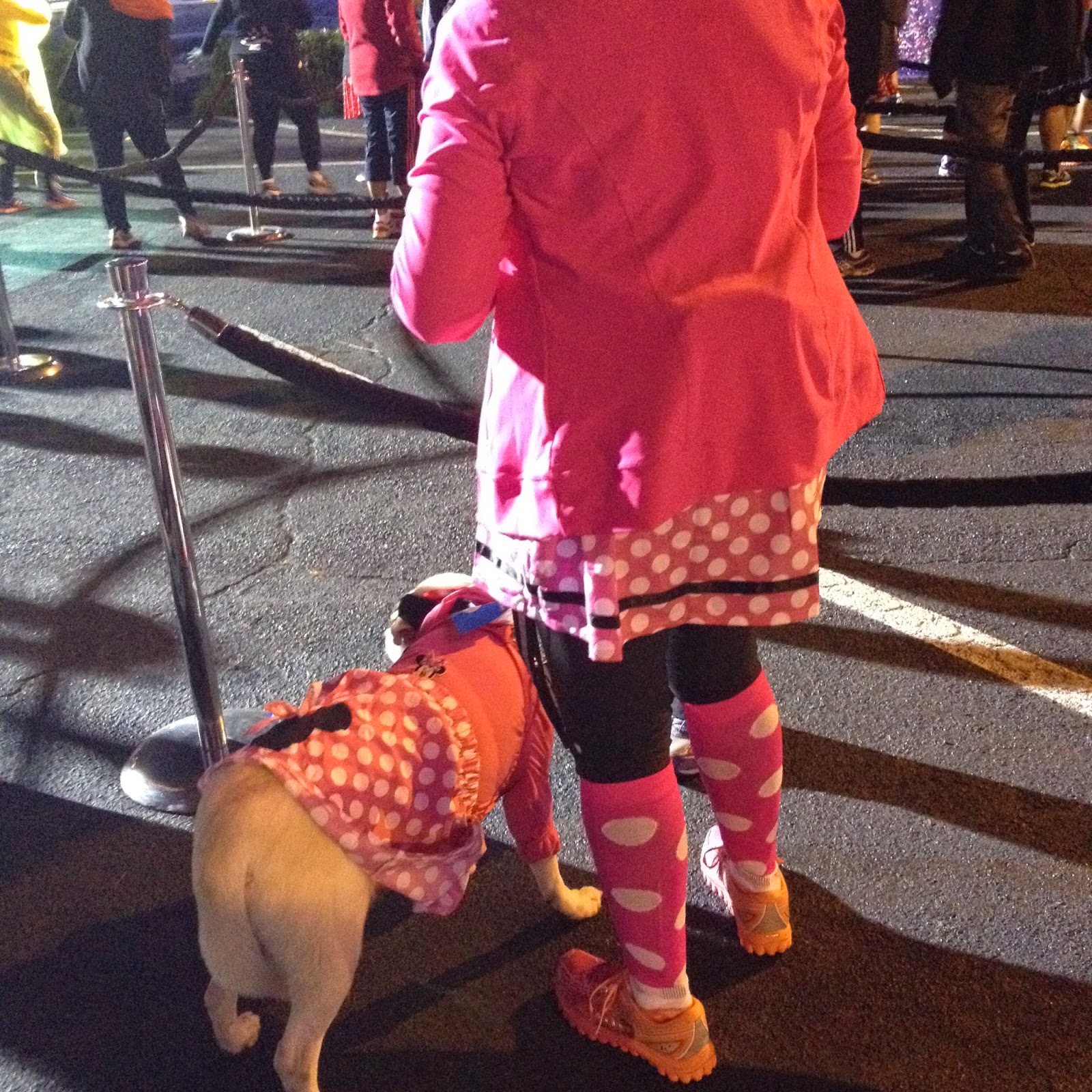 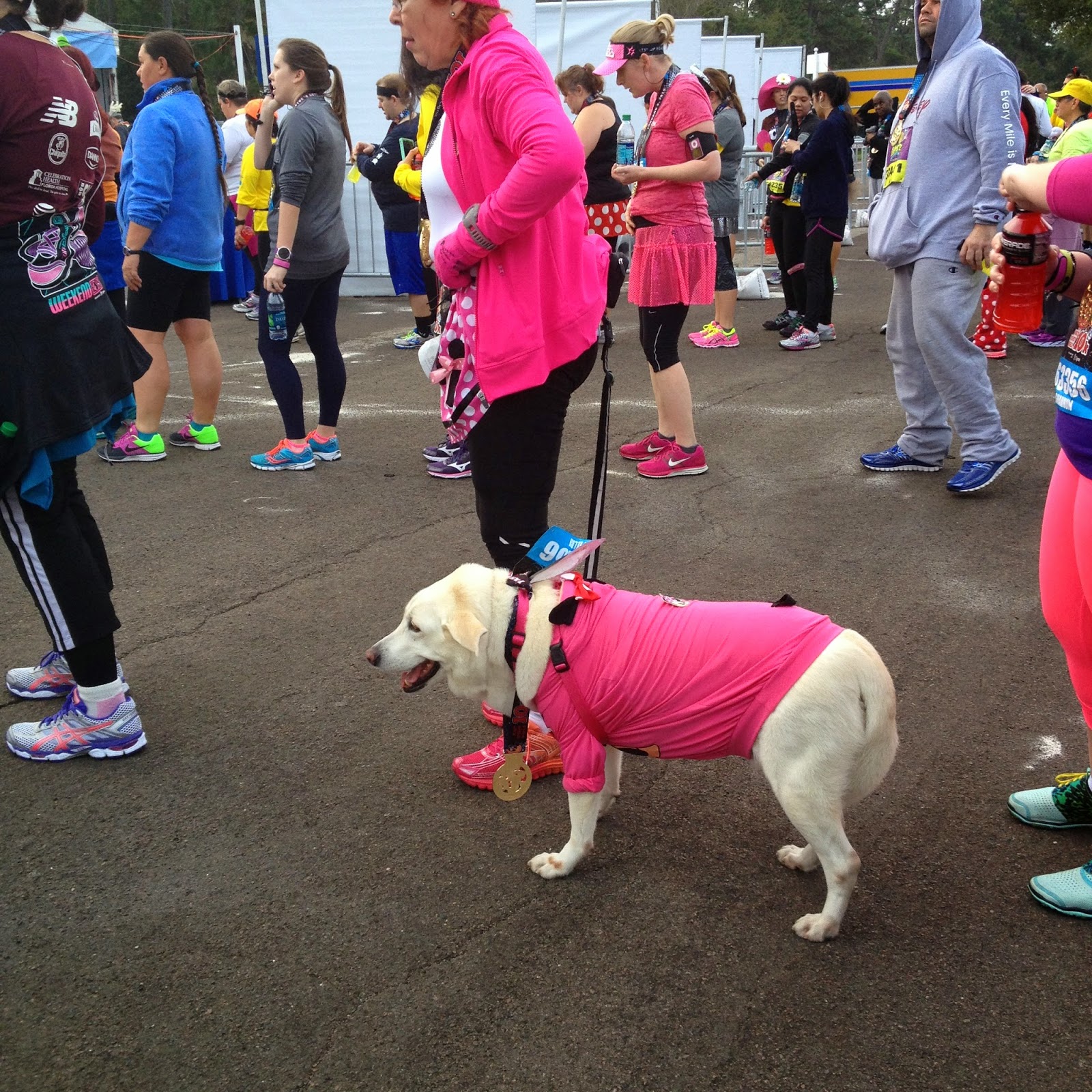 After crossing the finish line, DisneyGroom found that runDisney was not actually verifying times or photos for Dopeys or Goofys.  Still confused about why the post-race process does not match the participants guide.  Maybe it will all be explained following the marathon? 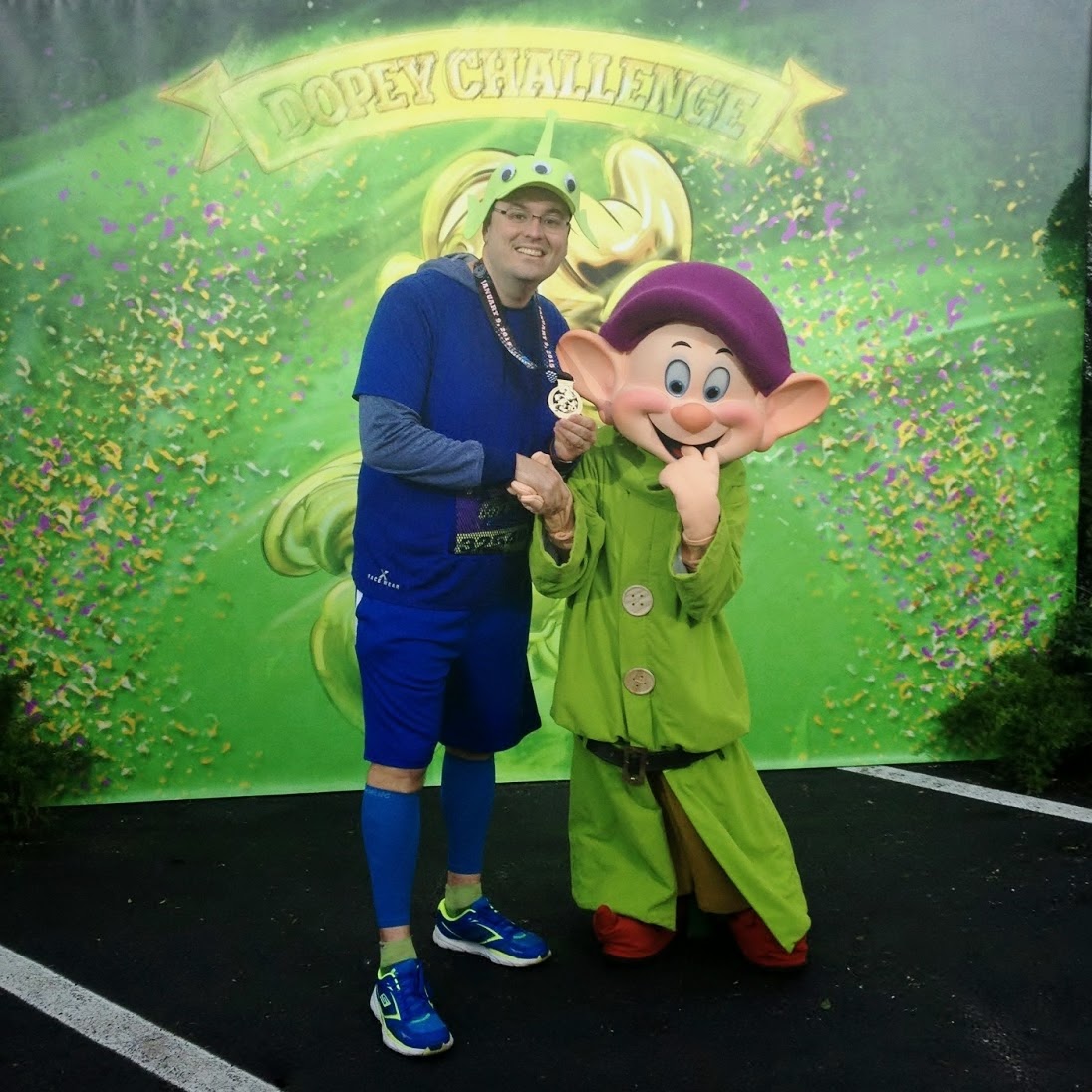 We have to say - we were really impressed by our character interaction with Minnie (and all the characters we saw this weekend).  Disney does a really great job trying to make everything special and memorable - and we really have to give a shout-out to Minnie.

She took her time with all the runners and made us all feel incredibly special.  With DisneyBride, Minnie spent a few extra moments positioning her in just the right pose for photos --- and stressing that the pinky MUST be extended to show off the medal.

Just a few of the photos are shown here in this slideshow. The photographers actually got over seven (yes 7!) dozen photos of us here with Minnie - mostly of us laughing - as we all tried to get our medal pics just right.  That Minnie Mouse is something else.

After the race, we headed back to shower and take a quick nap before our eventful afternoon.  More on that in the next post...

Thank you Erin! It's from Rock City Skirts. :) ~DB

Sorry it was so cold for you guys! On one of the days we raced, my sister ended up picking up someone else's gloves they threw away..haha. I love the mickey and the chip and dale in their baseball uniforms. Also I love that you saw a therapy dog. We love retrievers and saw a therapy dog after the marathon that was "off duty". The owner left us have some time petting him. That was the best post marathon therapy!

It was so cold before the race and I was horrified to see a runner in a tutu and sports bra in the corrals before the race. She must have been from Sweden or something! Chip's my favorite too, I gave him a kiss on the cheek after my picture with him too. Great recap!