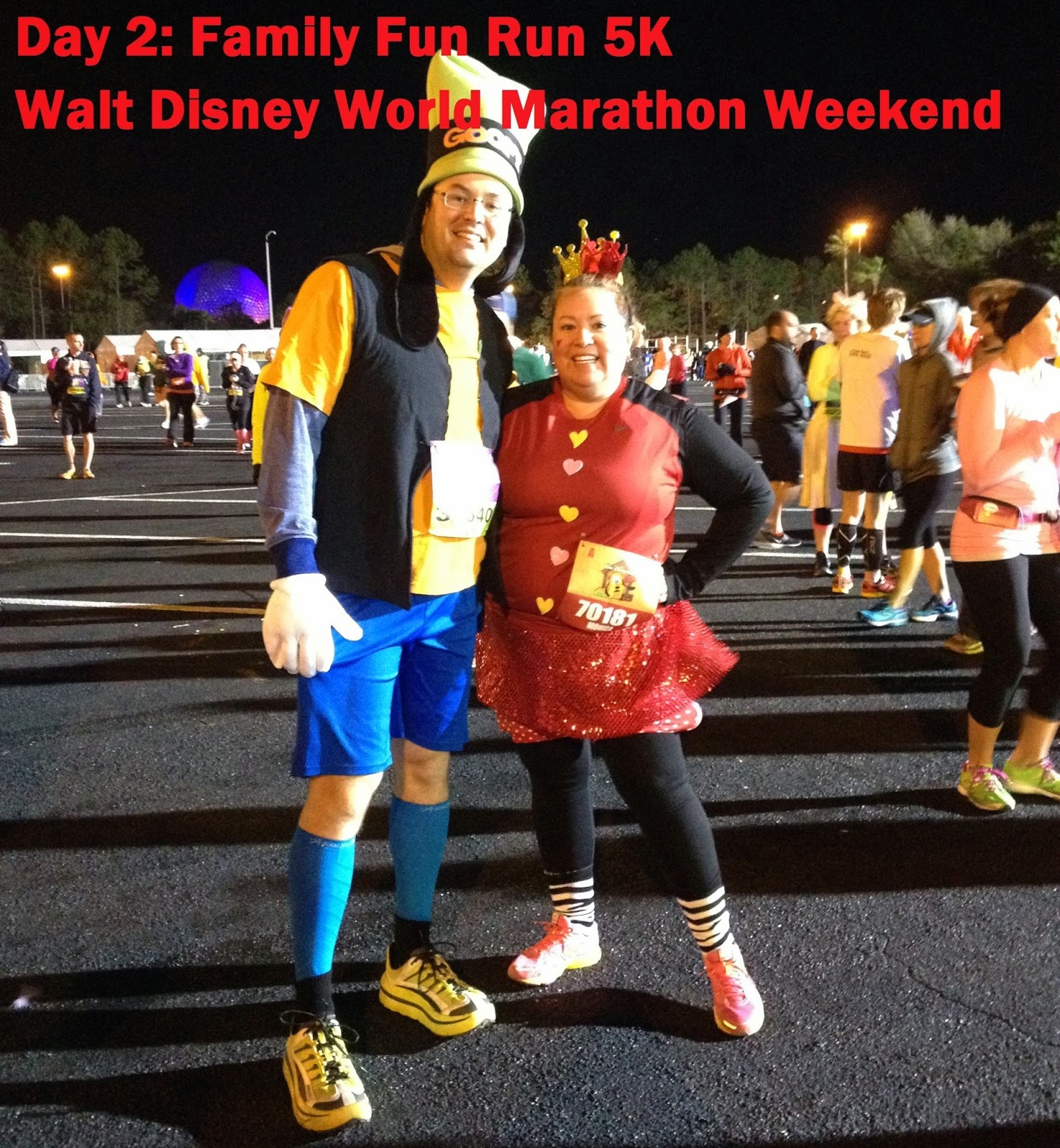 This morning was the Disney Family Fun Run 5k.  Apparently, runDisney wanted our Northern friends to feel at home.  Or, someone really annoyed Elsa.  It was super cold and very windy.  I am really looking forward to it warming up. 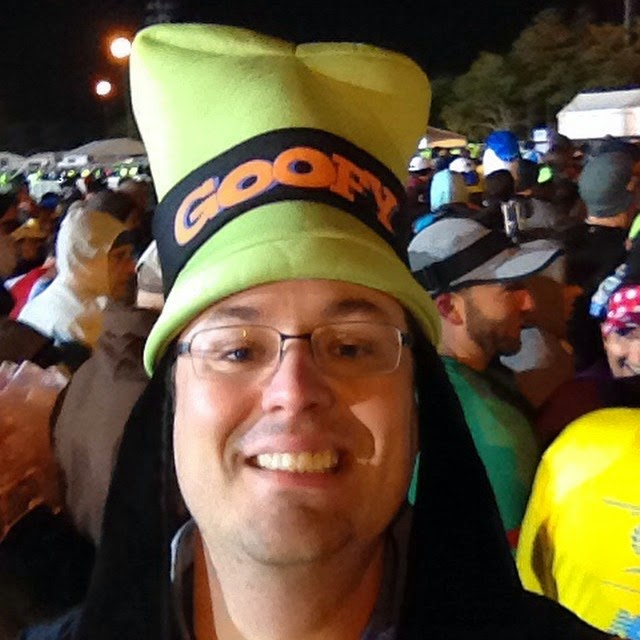 Freezing in the corral

We did not attempt to catch the 1st bus this morning.  I think that I will continue this tradition.  It shortened the time freezing while waiting to get to the starting line and meant less time on my feet pre-race.  We did run into a few running friends this morning, if I missed you, please excuse my absent-mindedness.  It was cold and I was trying to think about warm things.

We ran into Lauren and her husband of Lauren's Glass Slipper and chatted before the race.  Given the freezing winds, we all got to know each other pretty well, since we were all huddled together to keep warm. 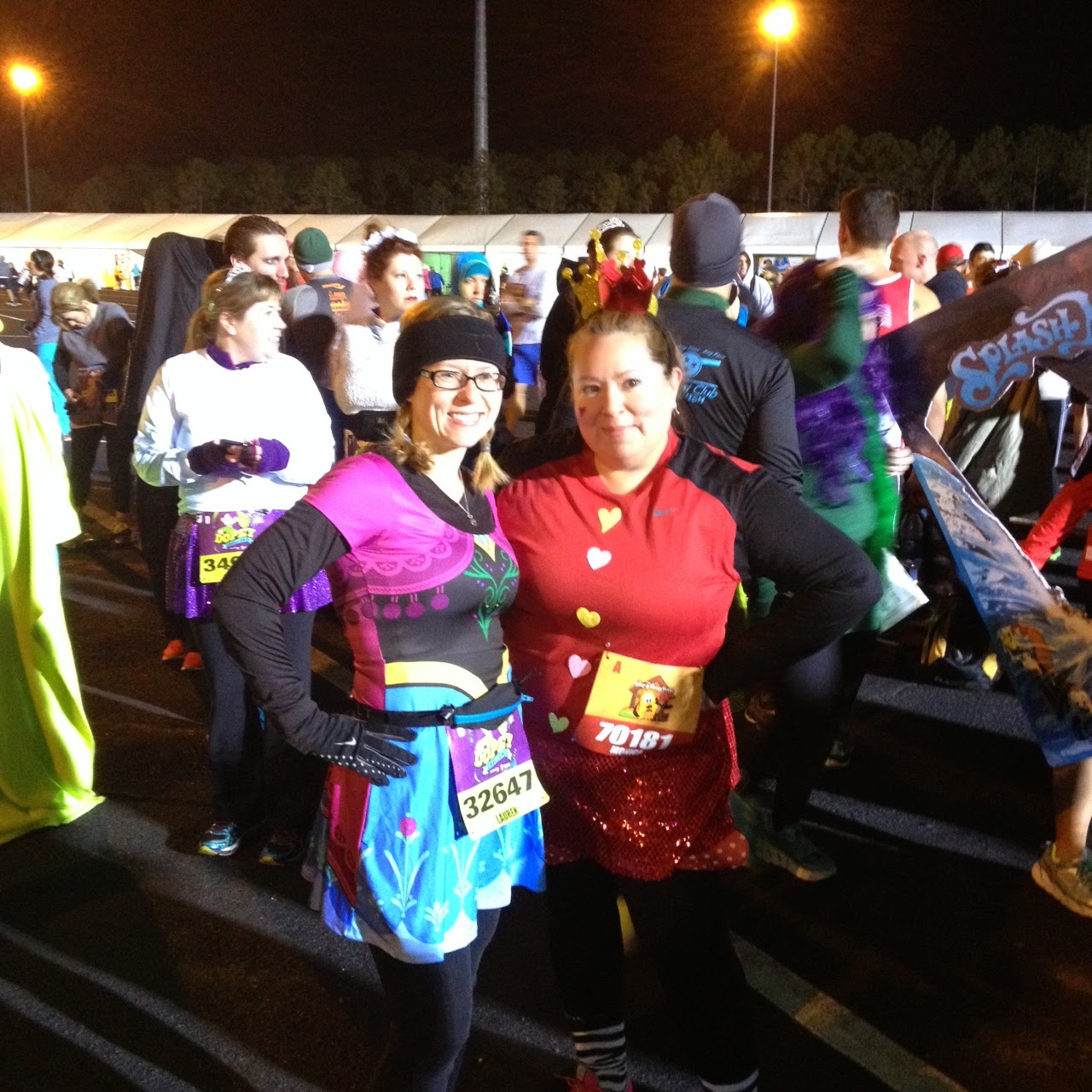 Also, with it being so cold, I didn't take many photos or tweet during the race.  With warmer weather, I should be able to take more photos and live tweet the rest of Dopey.

The race course should be very familiar to those who have run the Family Fun Run 5k.  The character locations always seem to be the same.  The race did change slightly, you now run past "The Land" in Future Land.  One more change from last year.  I was in the B corral this year.  It makes for a completely different race.  The lines for characters were nowhere near as long.  I did skip most of the characters, however, I ran into DisneyBride right before Pinocchio. 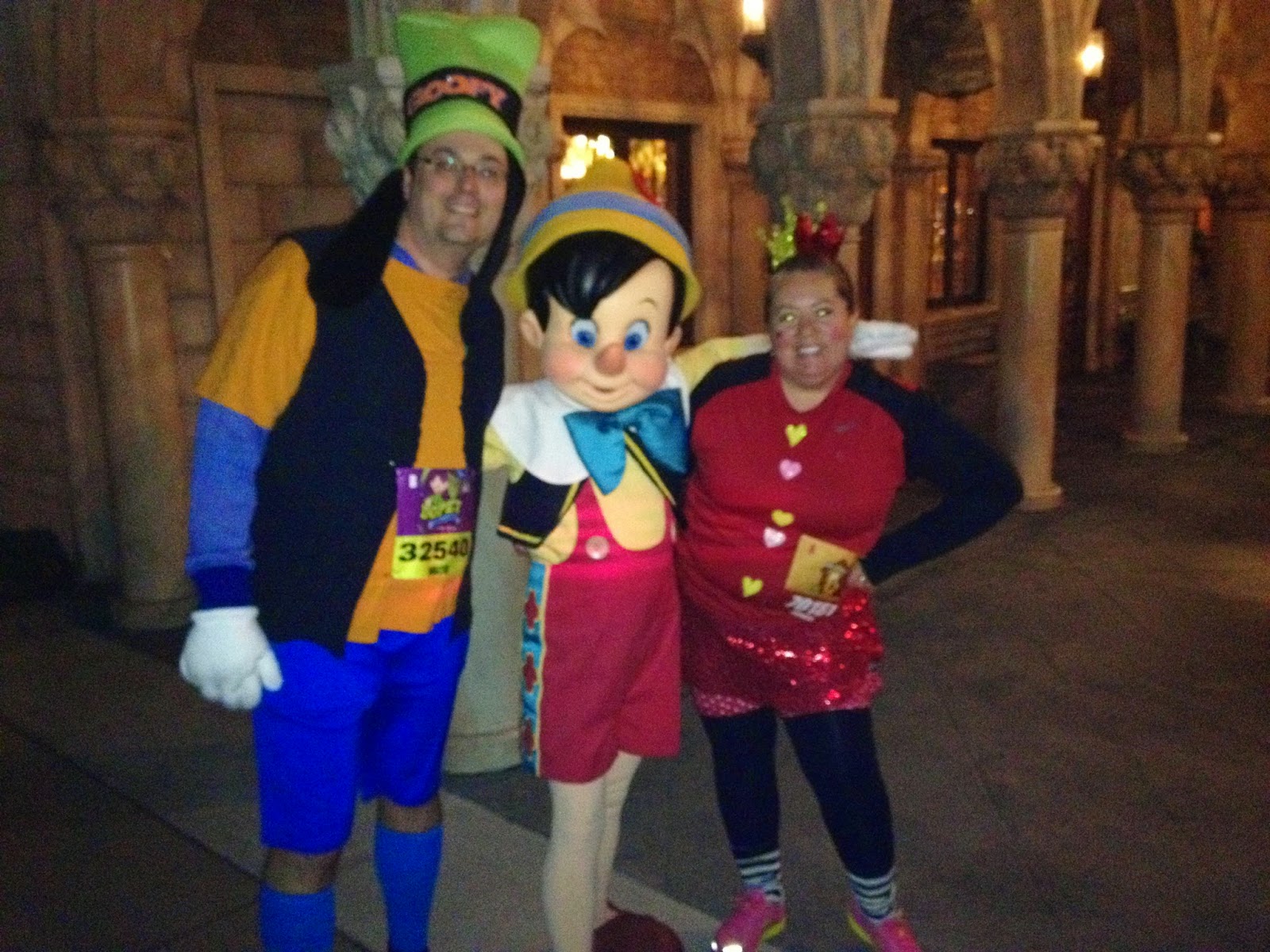 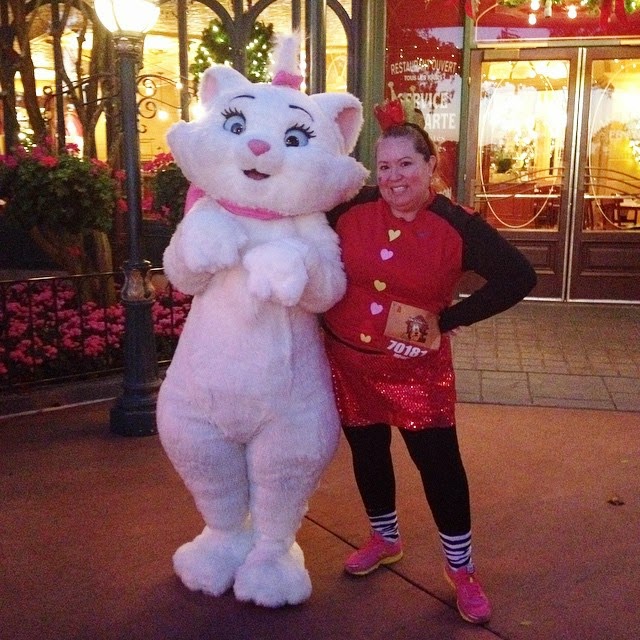 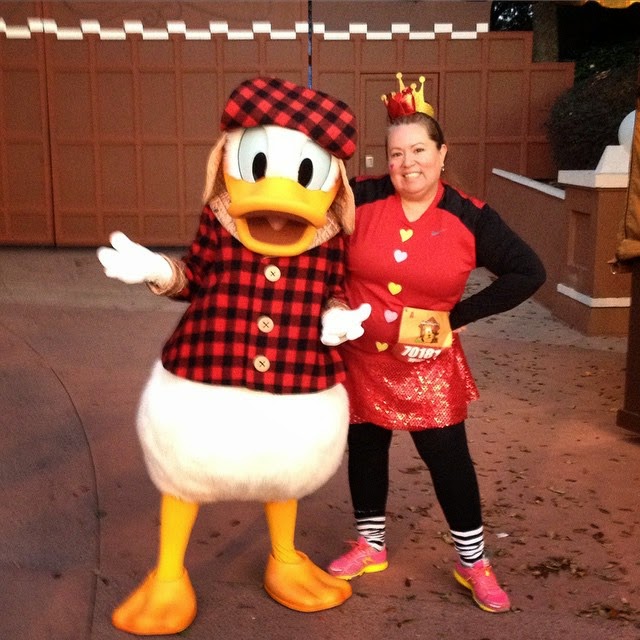 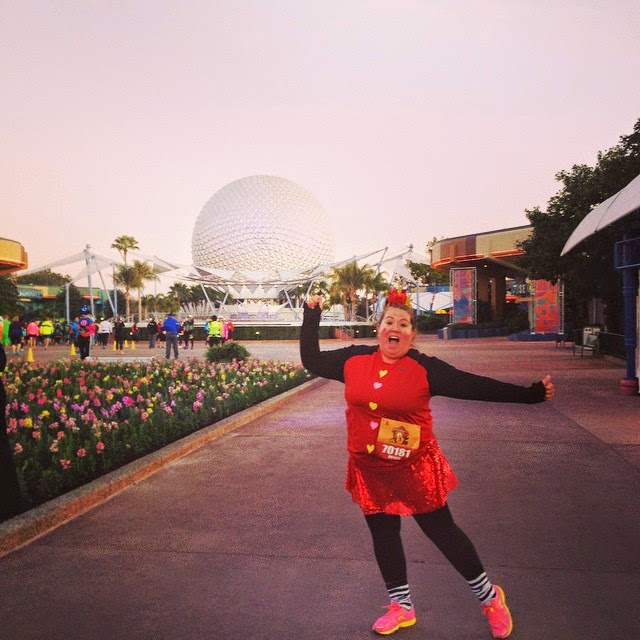 We spotted a few service dogs on the course.  This one here was dressed as Minnie, to match her human.  I thought it was really neat that the dog had her own bib, and got her own medal! 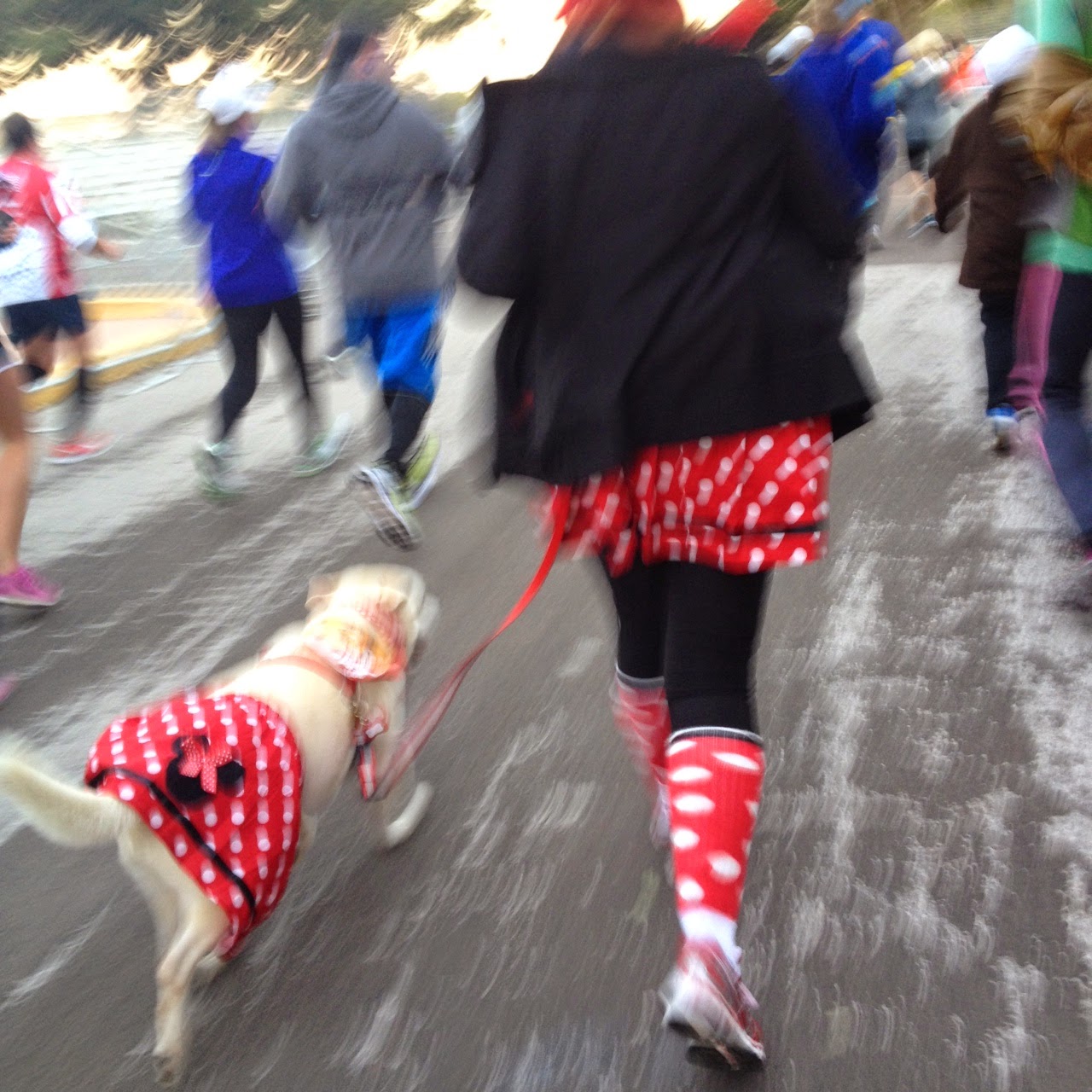 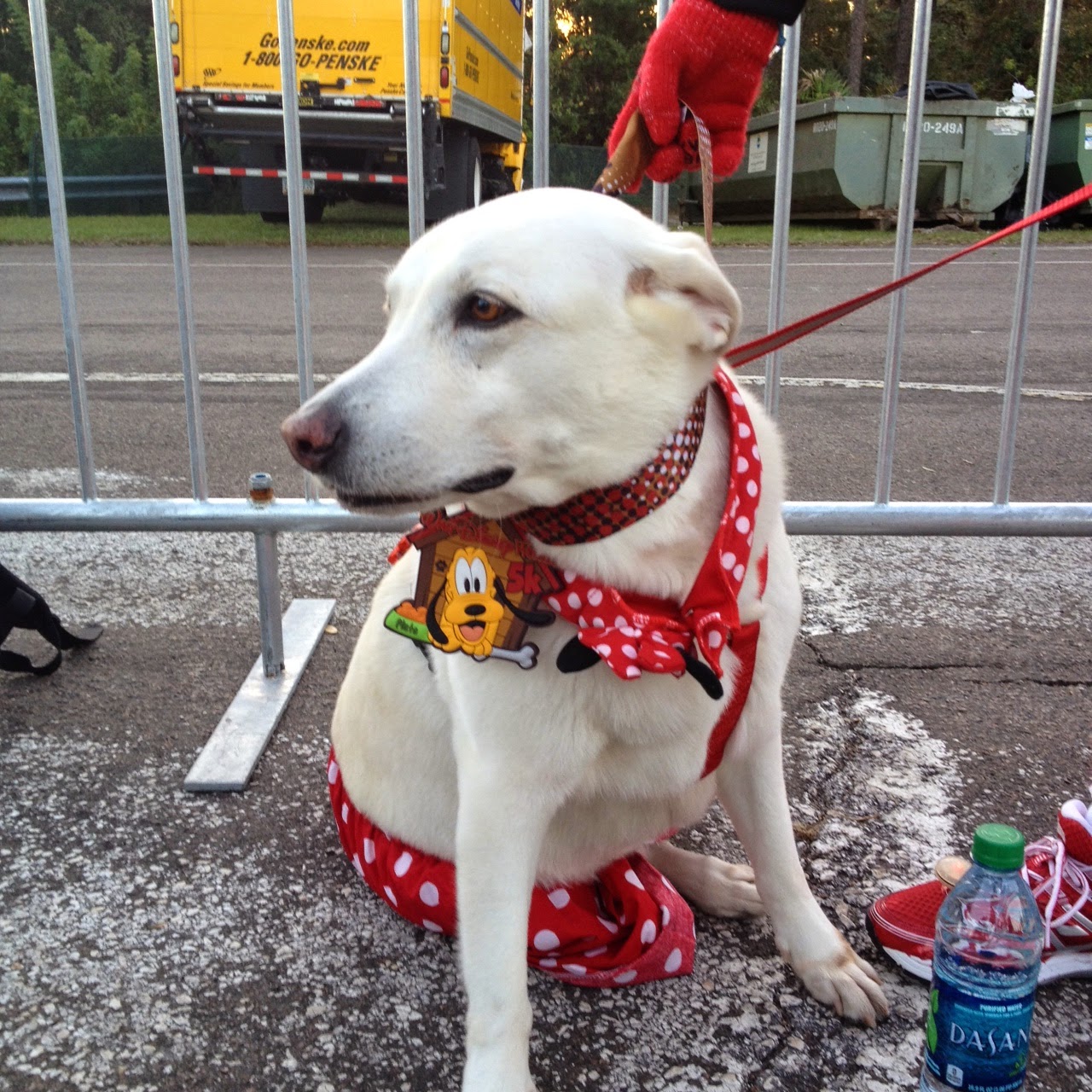 This was one of the best costumes seen all day.  Not one you see often.  Does anyone recognize this character?  Think back... way back. 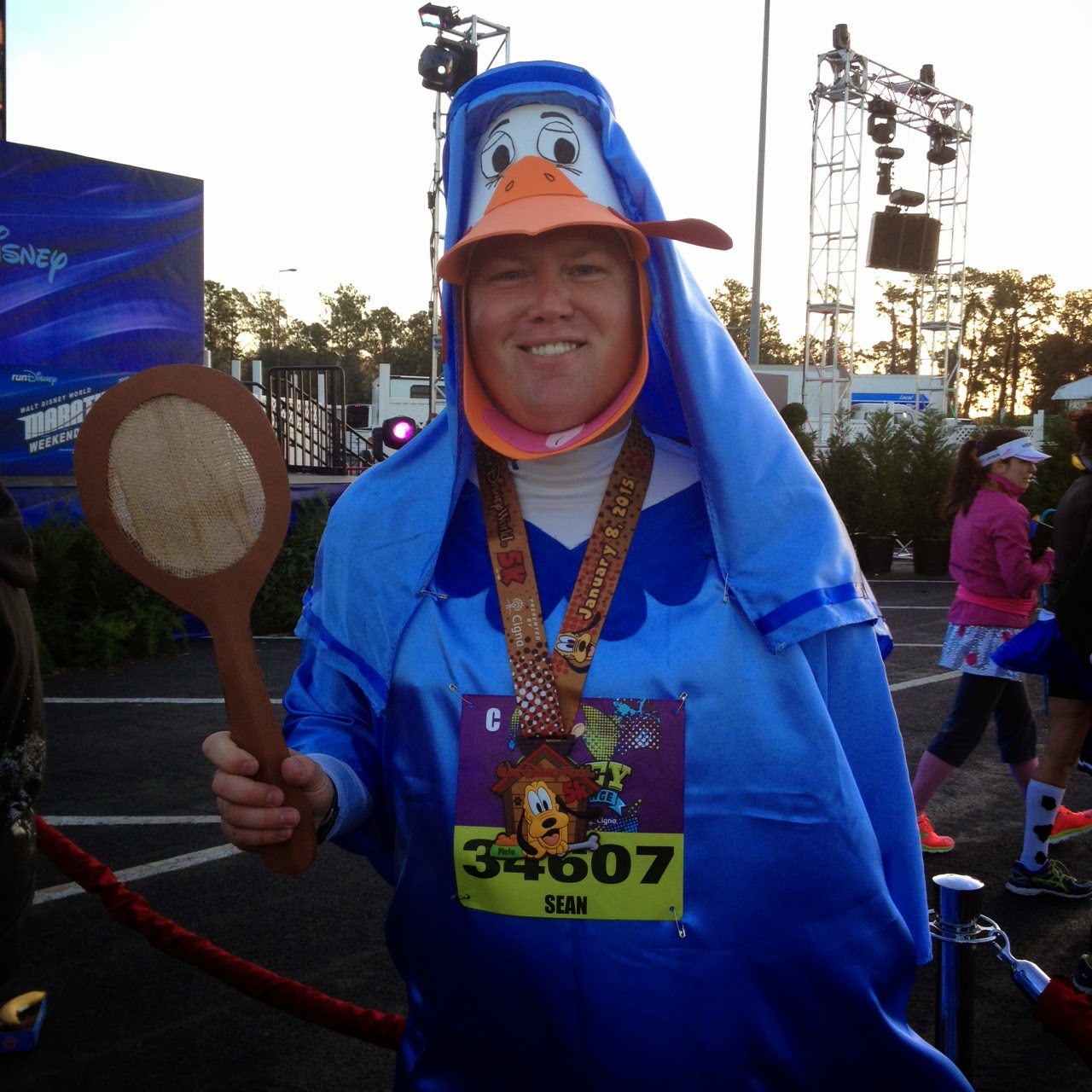 Was tough getting too many photos today.  Frozen fingers you know.  Hopefully the 10K will be better. 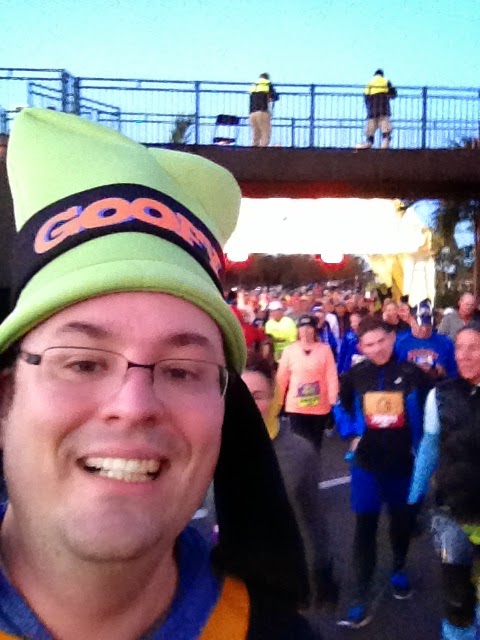 Crossing the finish line, I did manage to get the phone out to take a picture right after the finish line.  I also got a photo of my very cheerful medal volunteer. 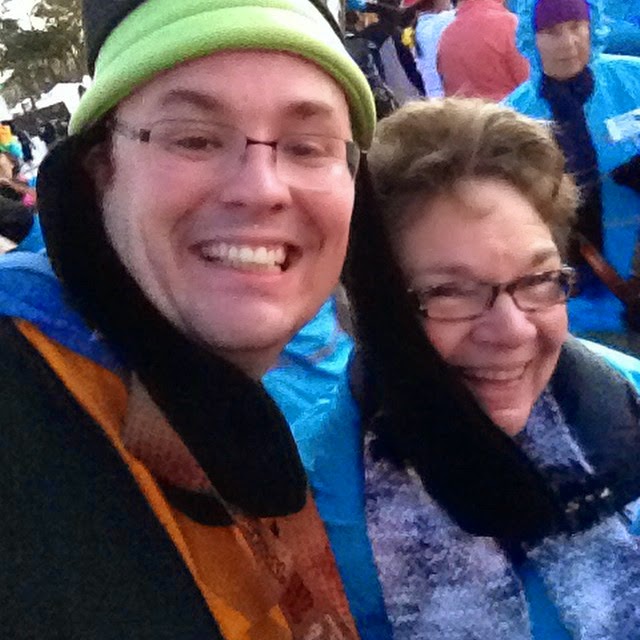 Following the race, the festival area had Dopey and Pluto out this morning.  With it being cold, most runners did not elect to stand in the line.  I got my photo with Dopey as I assumed the lines would be really bad later this weekend.  And well, you should always get a 5K photo with Pluto. 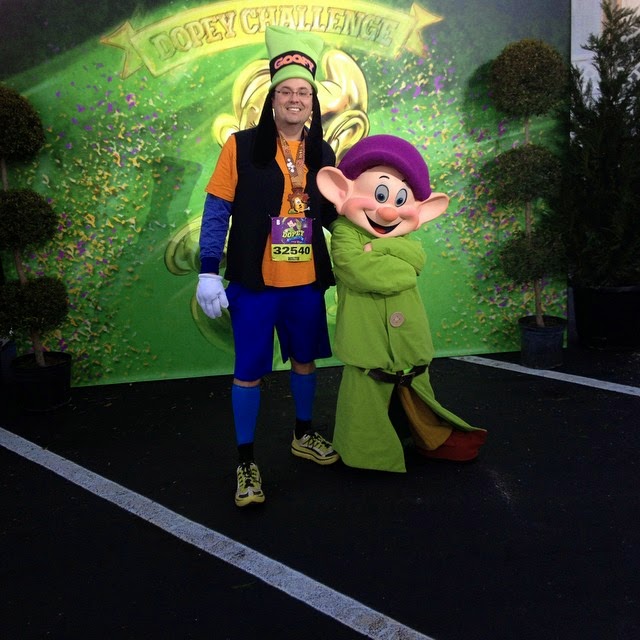 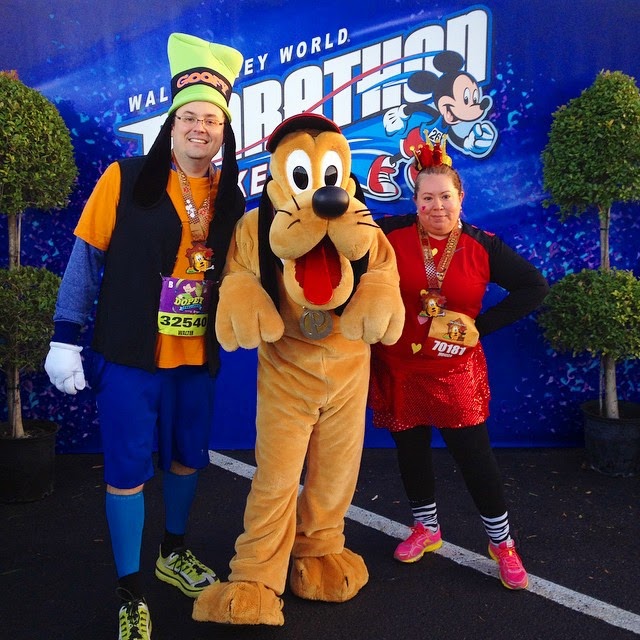 Following the race, we headed back to the hotel to change clothes and warm up a bit before heading back to EPCOT for lunch at Akershus. 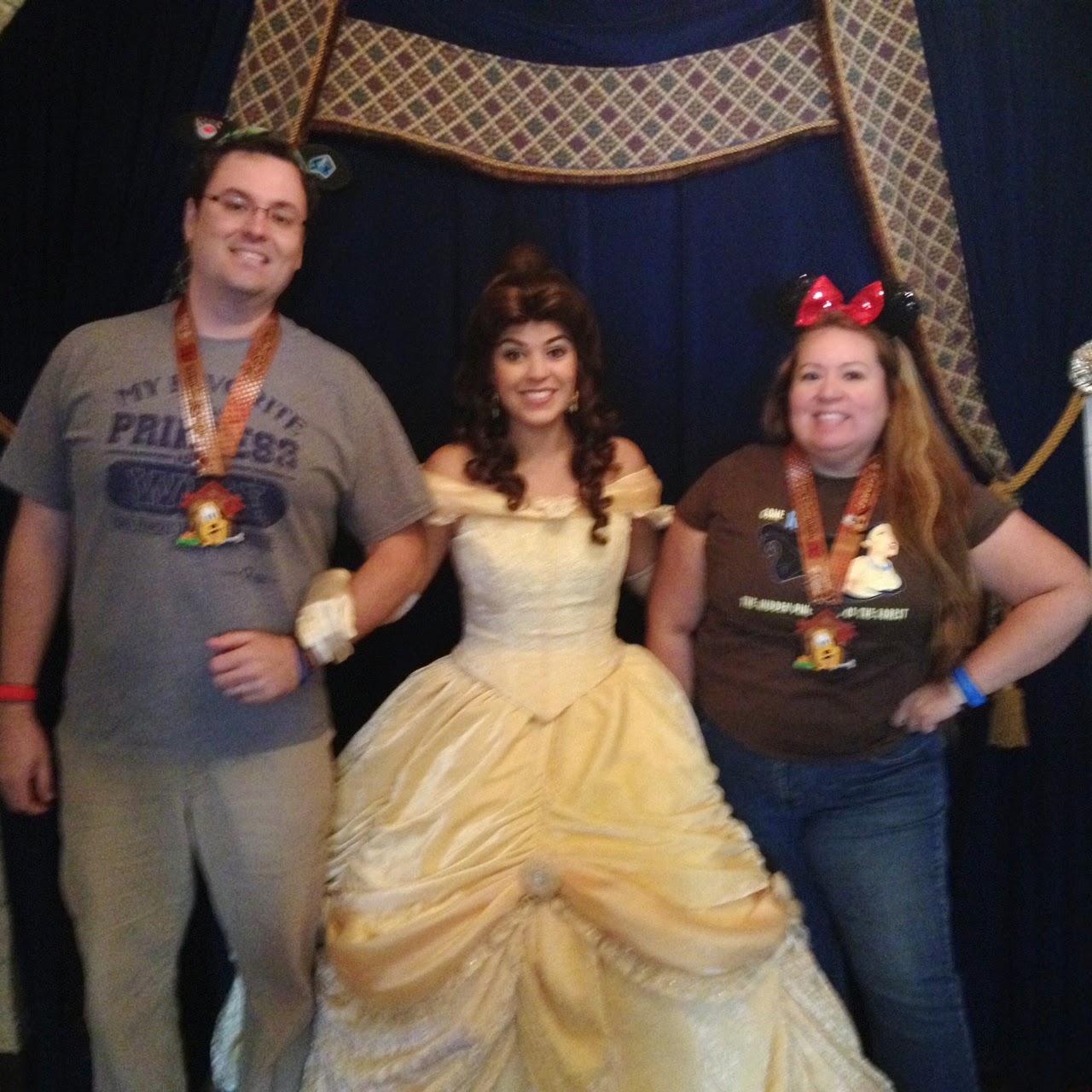 Following lunch, we enjoyed some time in EPCOT before heading to Magic Kingdom to enjoy a little more park time.  I hope that all the time in the parks doesn't come back to haunt me.

We did both have a Disney 'first' today. DisneyBride has been wanting a haircut at Harmony Barbershop in Magic Kingdom. 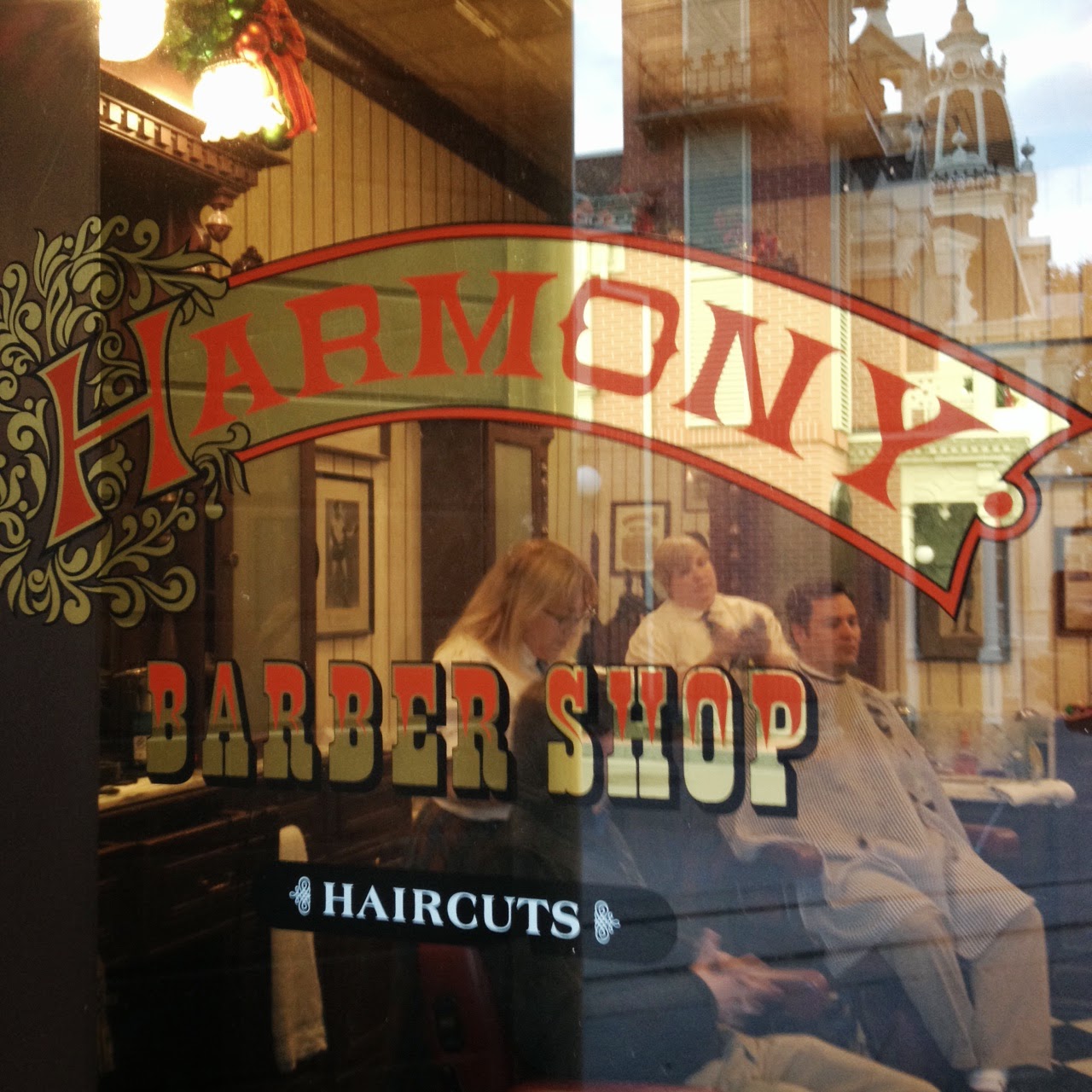 My little Rapunzel chopped off over 12" of hair to donate (and even after the cut, it still reaches her waist).


I decided to get a trim too. 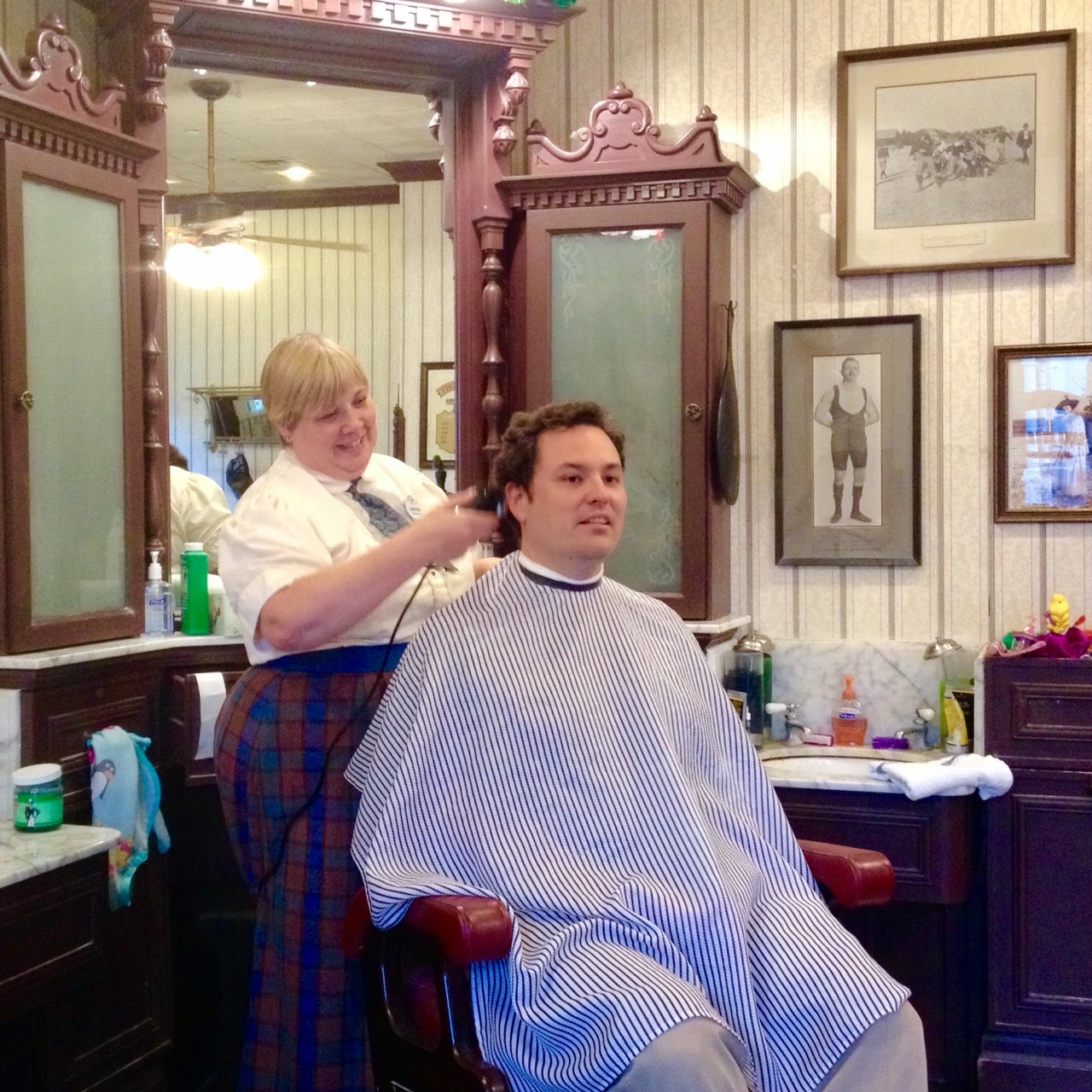 Keep tuned to the blog for recaps of the rest of my Dopey Challenge.

A review of the Expo can be found here.

Awesome post. Love the pictures. Being in the later corrals does make for much longer lines. Great job out there.

Fairytales and Fitness mod
11:37 AM

Your haircuts look fabulous! I am glad I missed the frigid 5K race although that looked like a great group of characters on the course. I love seeing service dogs at races ( mostly because most of the time they are retrievers..lol). We saw a Golden retriever service dog after the marathon on Sunday!