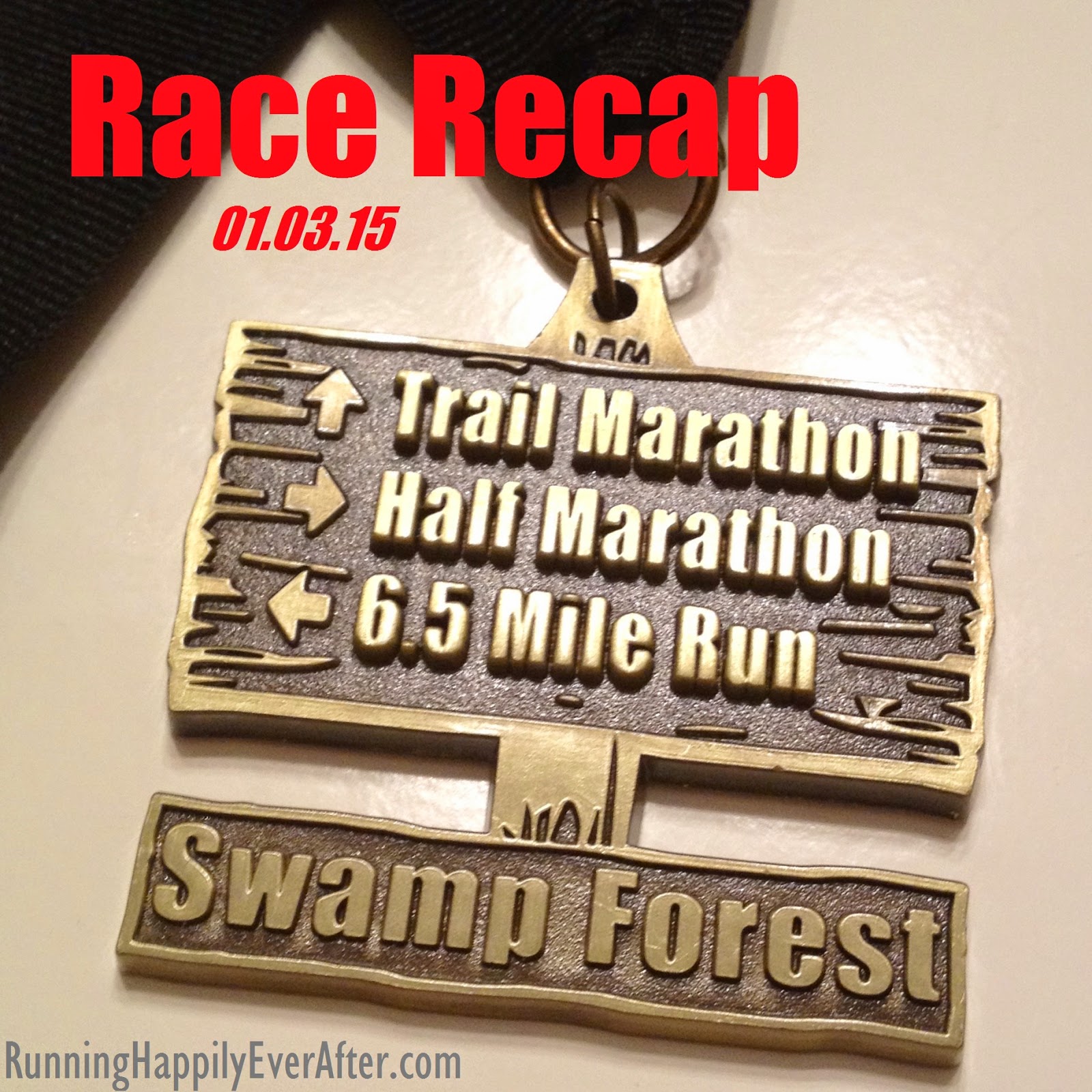 I thoroughly enjoy running trails.   In the last few years, a local race director, Bobby York, has organized several trail races.  I ran his Summer Trail Series (recaps here and here) and had a blast. So this year, I added the Swamp Forest Trail Half Marathon to the schedule. (DisneyBride ran this Inaugural race in 2014.) This race is my last before kicking off runDisney's Walt Disney World Marathon Weekend presented by Cigna. Or as us Dopeys call it:  Dopey Week.


The Swamp Forest Trail course is a 6.7 mile loop trail that I would run twice to complete the half marathon.  It is a beautiful single track trail within Elinor Klapp-Phipps Park in Tallahassee, Florida.  The weather this day did not cooperate; the rain never seemed to stop. This made the trail very slick, portions were flooded, and mud was around every corner.  In other words, the perfect trail race.


After catching up with a few people before the race, I filled my Orange Mud Hydraquiver Vest Pack 2 with Powerade and headed to the start line. 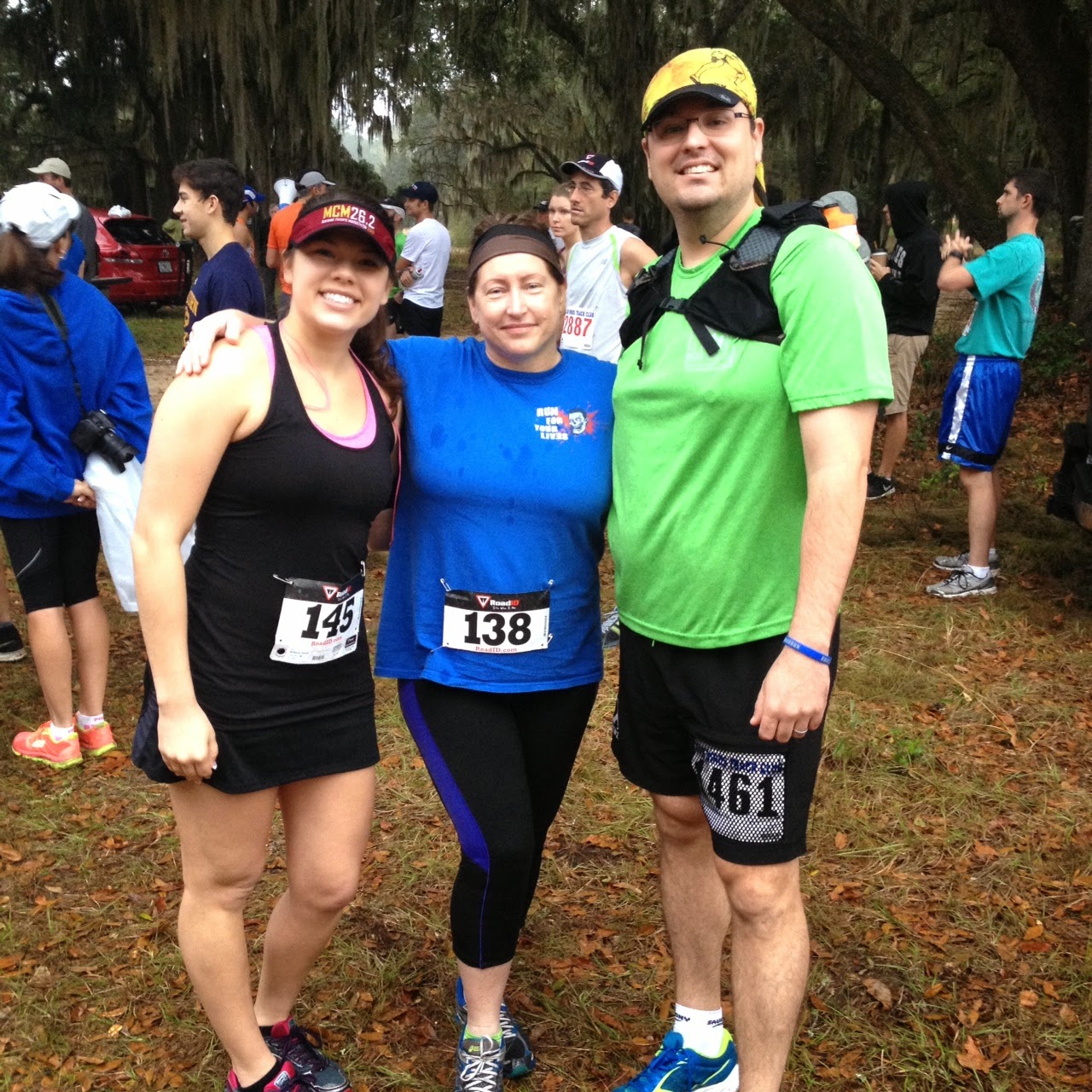 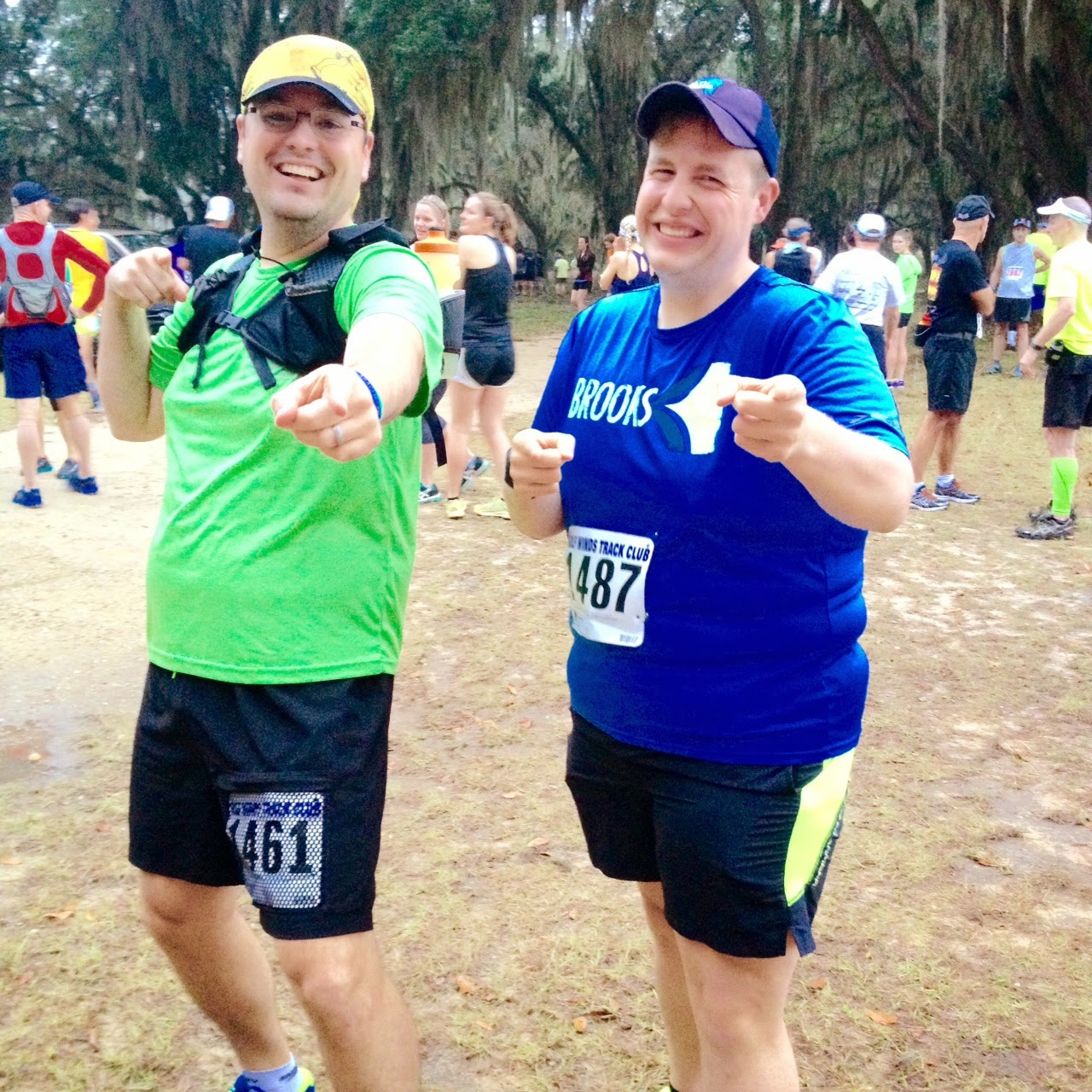 Nathan of The FotoGraphing Fat Kid


The race starts with about a quarter mile of access road to allow the participants to spread out.  Fortunately, I have found trail runners to be very honest about their placement on the starting line.  After having a little time to spread out, we all hit the trails.  Single track trails make it hard to pass, so I skipped my intervals for about a half mile to allow a little more distance in between runners.  The rain came through in waves during the 1st lap, nothing too heavy, but always reminding you it was there.


Between the roots, mud, and pooling water, you always had to keep your eyes on the trail.  Knowing that the Dopey Challenge was just around the corner, I was extra careful during this run - watching where I stepped.  While I am normally one of the first people to wipe out on a trail run, this time I managed to make it through unscathed.


The trail was extremely well marked.  The Swamp Forest Trail has many twists and turns, and several intersecting trails.  I have been known to head out to the trails on a Sunday morning and end up somewhere completely different than my intended location.  Fortunately, it only shows you more cool places to run. Thankfully, on race day I never left the course.


About a 1/4 mile from the 2nd aid station, I came across a friend who had taken a pretty nasty spill.  She was writhing in pain and another runner had stopped to provide help.  She had caught her foot in a root and twisted her ankle pretty bad.  A couple of other runners had stopped to help as well.  It always amazes me the concern that trail runners are willing to show their fellow competitors.  It quickly became clear that she wasn't going to be able to get out on her own.  A fellow runner and I both grabbed an arm and tried to help her to the aid station.  She was in too much pain to have both of us carry her.  After a few steps, I had to give another runner my hydration pack to drop off for me at the aid station, and I had to 'fireman carry' her off the trail.  Fortunately, by this time we had someone from the aid station already working on getting an ambulance.  Fellow runners were extremely helpful in helping me avoid slipping on the trail or hitting the already injured runner's head on a low hanging branch.


The aid station happened to have a couple of volunteers who were nurses. They did what they could to make her comfortable while we waited for the ambulance.  DisneyBride was volunteering at the finish line, so I borrowed a phone from one of the aid station volunteers and called her.  I asked her to keep an eye out for the injured runner's husband (he was running this trail race also), and to notify him of her injury and where to find her.  Since it was such a wet rainy event - none of the runners seemed to have phone on them. I was too invested at this point to leave, so I stayed until her husband arrived, right around the same time as the ambulance.  After she was on her way to the ER for an x-ray, I headed back onto the trail to finish the 1st loop.


Back on the trail, I was even more careful than before.  With the rain continuing on and off, the trail was getting more and more flooded and wet.  I finished the rest of the first loop without any issues. 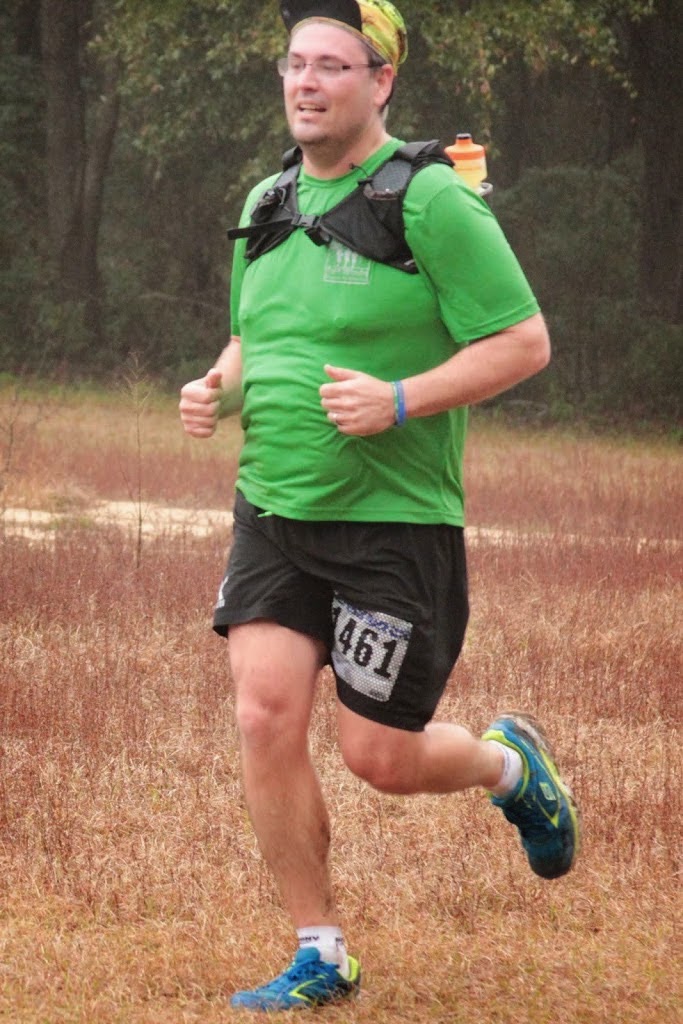 
After waving at DisneyBride and trying to convince a couple of friends to join me on the second loop, I was off. 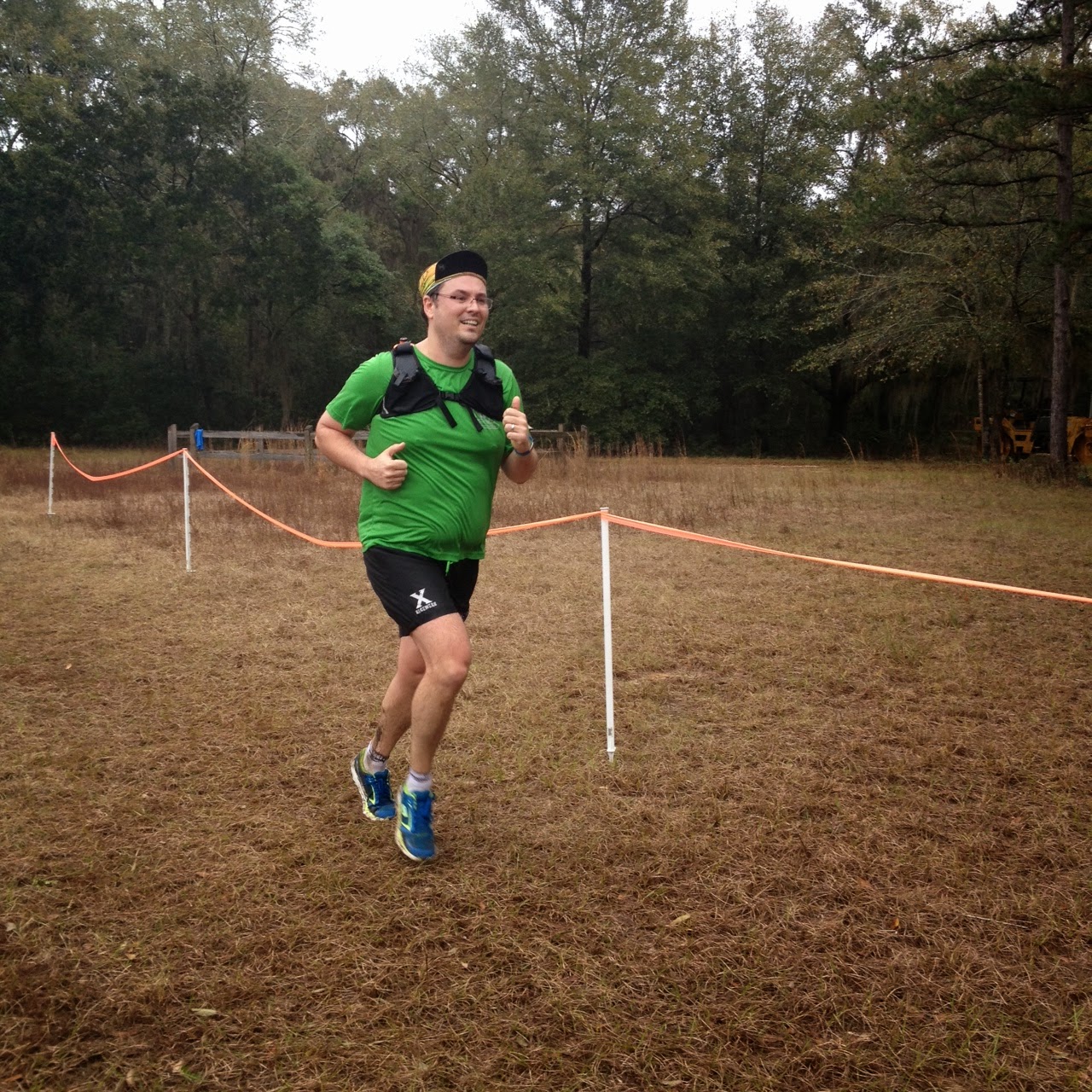 The rain started to really come down.  The trail was turning into what felt like an ice skating rink.  All the runners I saw had really slowed down.

Finishing the race at this point was going to be all mental.  Every step had to be watched, each hill taken slowly, and each root avoided like the plague.

The Swamp Forest Trail was really living up to it's name.  After completing the second lap without any issues, I was looking forward to the finish line (the 2nd aid station did remark that they were glad to see me not carrying a runner this time).  Not only was my lovely DisneyBride waiting for me at the finish line, but this was waiting for me as well... 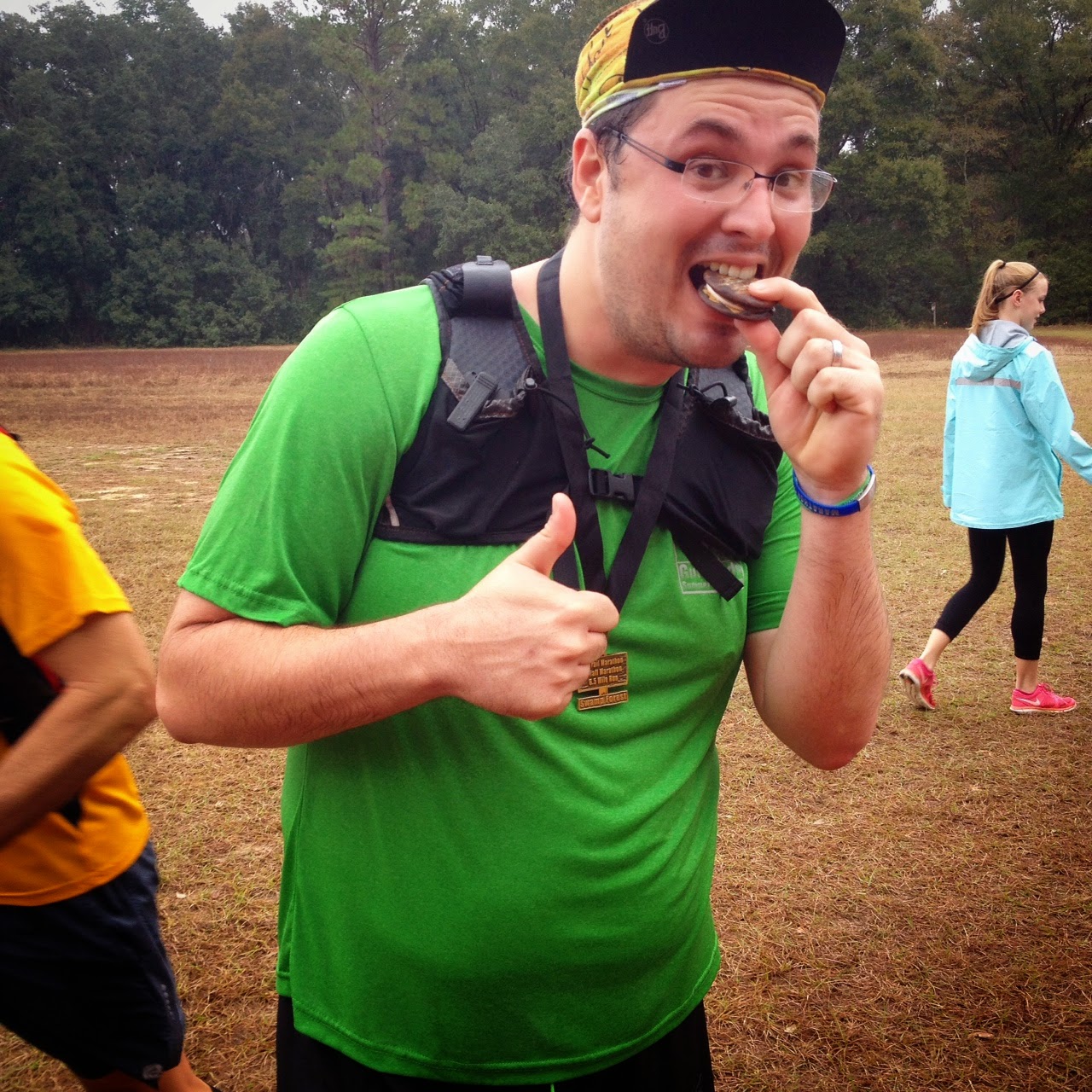 Nothing beats a post-race Moon Pie!

Securing Moon Pie as a sponsor is just one of the many reasons our race director is awesome.

Next race on the #DopeyAintEnuf schedule is the the WDW Marathon Weekend 5K on Thursday.  I hope to get recaps posted daily, this may slide a bit due to spending time in the parks (you understand).

p.s.  Our friend luckily did not have a broken ankle. She is in an aircast for a while, and expects to recover soon.

What is your first running event of 2015?

Would you complete a race in the rain?
Tweet