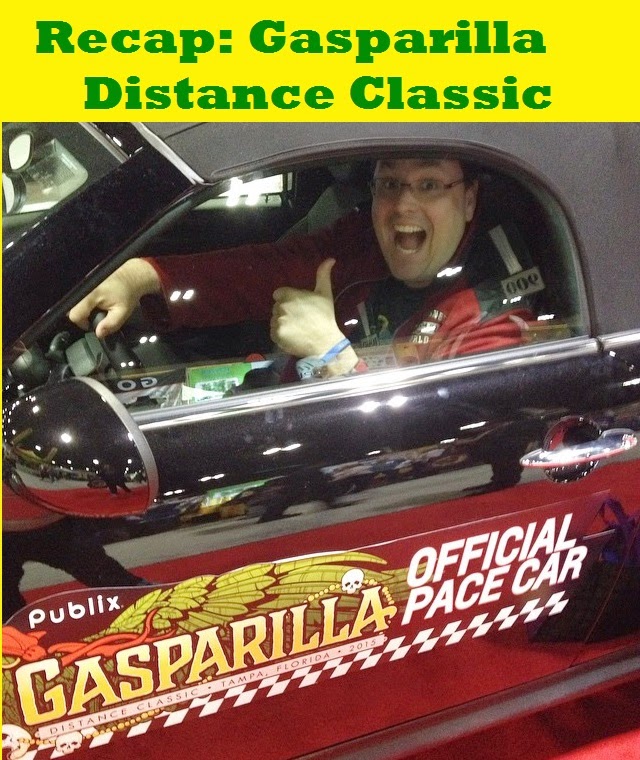 Sorry for this recap being nearly two months late.  The Gasparilla Distance Classic was Feb 20 & 21, 2015.

This year we did not run the runDisney Princess Half Marathon.  We ran the Gasparilla Distance Classic in Tampa that weekend.  The GDC is a two day event, with two races on Saturday (15K & 5K) and two races (1/2 Marathon & 8K) on Sunday. 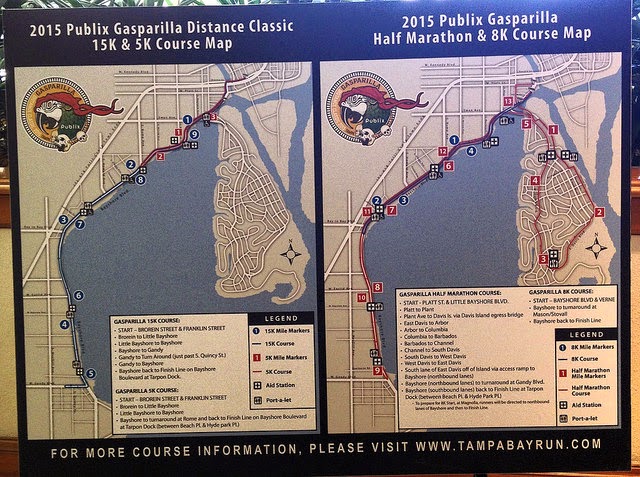 This expo was by far the best I have ever attended. The expo took over a pretty large portion of the Tampa Convention Center. Free samples and demos were everywhere.

There was even a Star Wars themed booth with characters for photos. 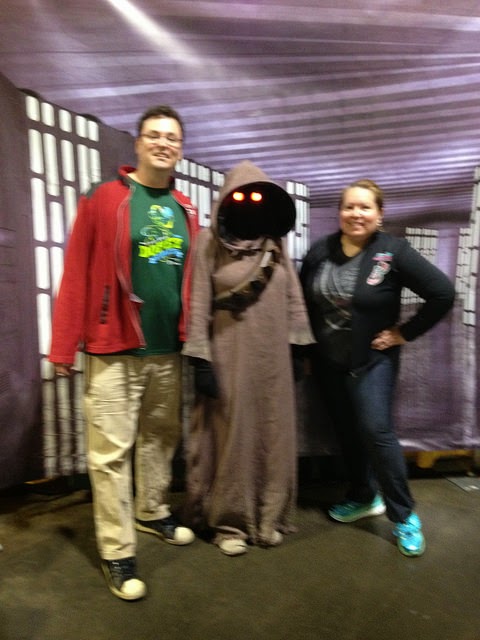 The pick-up areas (Bibs were picked up separate from your shirts and jackets) were well staffed with volunteers and the waits were a couple of minutes tops.  Free samples and demos were everywhere. We tried several foods including electrolyte popsicles, chips, drinks, fruit, and other snacks. Also, the reusable bags from the race sponsor, Publix, were a very nice touch.

Our hotel was near the start area so we could walk to the races. The starting area was well organized and the corrals were well marked. The 15k was an out and back course mostly along Bayshore Blvd.

It was a cold morning but we had a fun time.  We ran with several friends from Tallahassee. 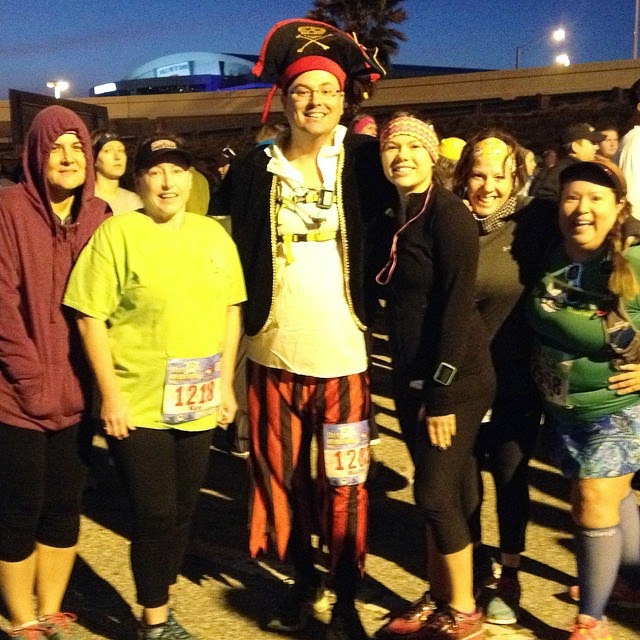 The course had plenty of aid stations and also featured entertainment at several points.

After finishing the 15k, runners had the option to check their medals before the 5k. I choose to put my medal in my hydration pack. Other runners told me the medal check was organized and accepted and returned medals very efficiently. The finish line was well stocked with water and Gatorade.

I finished the 15k with plenty of time to stroll towards the starting line for the 5k. Plenty of volunteers were on hand to guide runners to the the start of the next race. The 5k followed the same course as the 15k (obviously the turn around was much earlier). For a very well attended race, the crowds didn't seem that bad. At the turn around for the 5k, I ran into DisneyBride. We finished our respective races together.

Following the race we headed to the festival area. The festival area is broken into two separate areas. One near the Convention Center has plenty of food and drinks from sponsors available. Fresh fruit, cold coke, fruit cups, and more was available to runners. Further down the walkway, in an adjacent park was a live band and the beer area. The cold beer and live music was a great way to wind down from the races.

Day 2: Half Marathon and 8k

The starting area was well organized on day 2 as well.  Since I had to finish the race under 2:55 gun time, I decided to try and PR.  The course is a basically a figure 8 and relatively flat. Again oncourse entertainment was plentiful, bands and entertainers to keep your mind off the running. I did manage to get my half marathon PR that day. Not quite the PR I had hoped for, but a PR.

The finish line was again well stocked with beverages and the medal lines were quick. I headed for the starting area of the 8k as was pleasantly surprised by how close it was. I had read recaps of previous years where people made it out to be quite the hike.

The 8k was essentially the same course as the 5k.  Running the half really took a lot out of me.  I ran the 8k pretty leisurely with a friend.  Crossing the line, I headed to the food area next to the convention center (long drive this day, so I skipped the beer), they really brought out their "A" game.  Unfortunately, everyone decided to enjoy the festival area.  Lines were enormous.  I skipped almost all of them and headed straight to The Columbia table and enjoyed a nice plate of delicious hot food. 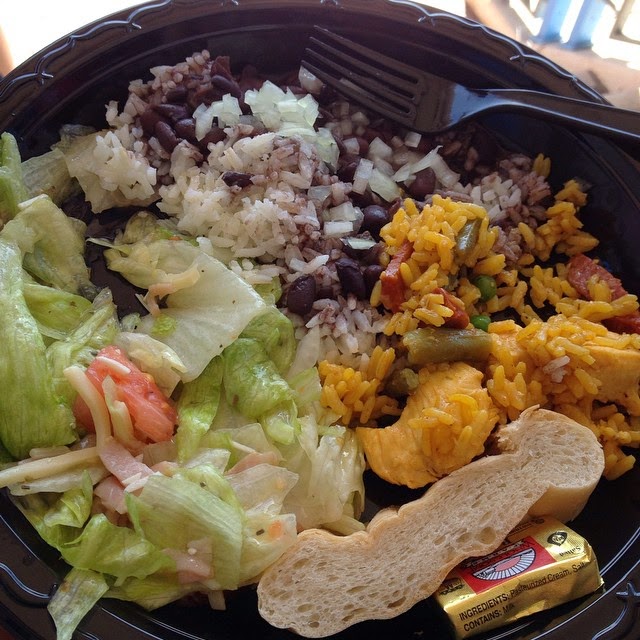 The Not as Good 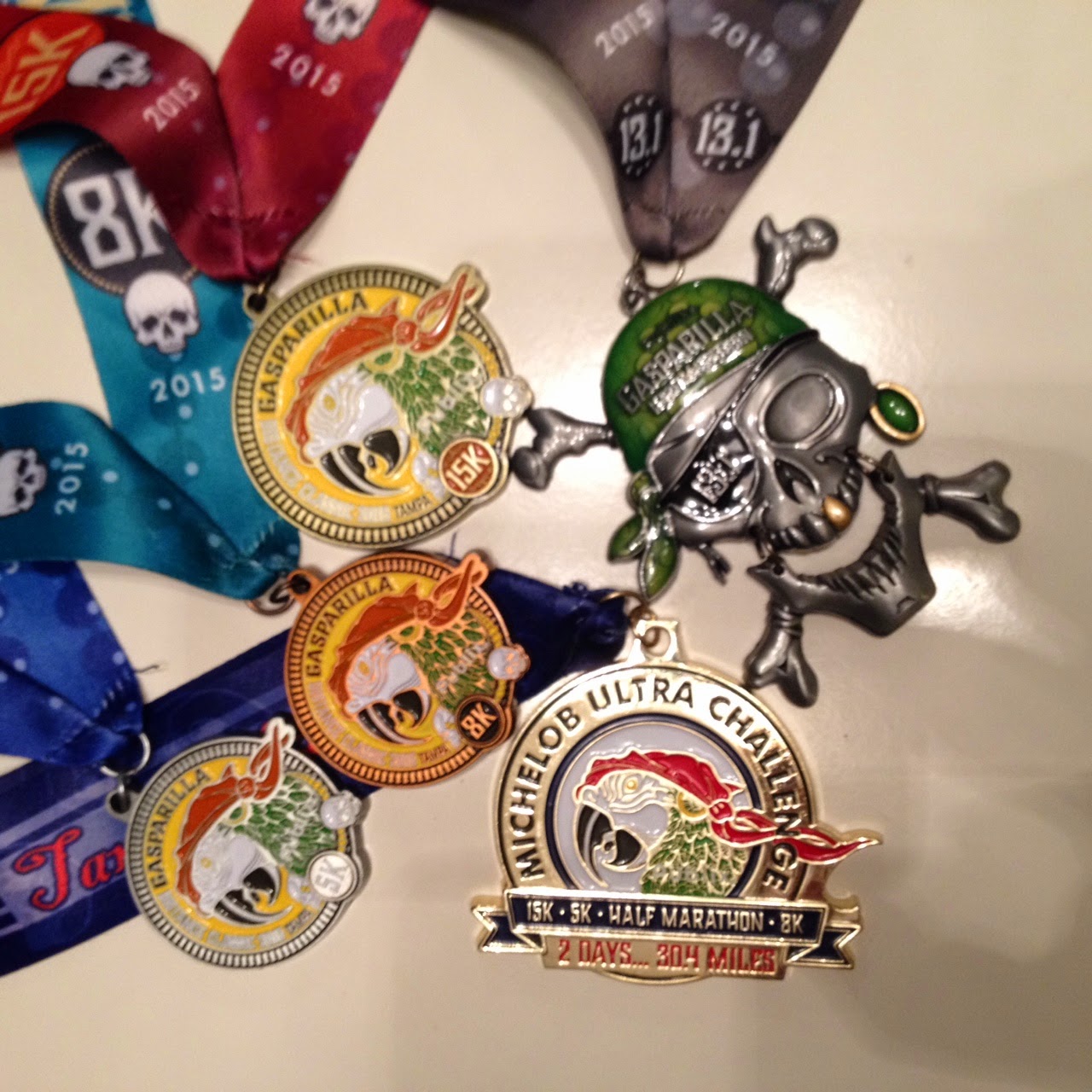 For next year, we are undecided if we will return. I would love to go back, but DisneyBride wants to go to Princess Half Weekend.  We still have a few months to decide.

Pirates OR Princesses for 2016?
Tough decision.  Which would you choose?

Sounds like a fun race that was well organized! I love your outfit! I like when runners find races that are just as enjoyable and put together as well as Disney, but you have to admit there is just something magical about Disney race!

I have some friends doing Pirates AND Princesses next year! They're going to run the Enchanted 10k at Disney and then go to Tampa for the Gasparilla half the next day. I think they're going to do custom shirts and stuff to make this their own personal challenge. I was going to join them but then we decided to do the Disney Dream leaving that Monday so we decided it would be better to just stay at Disney for 2016.

this race sounds awesome! I wish more races here did challenges because they are so fun!
I will say Princess half this year was awesome, mainly because I have been working hard and moved up in the corrals and got every photo stop I wanted and still finished right around 3 hours. it is definitely a tough choice