Running a race in costume is not a requirement, but it can make your race day more fun.  You will also elicit many enthusiastic cheers from strangers.  Instead of a polite clap with a "good job, blue shirt lady!"  they will fist pump and yell, "Fly Tinker Bell, fly!" or "The Wicked Witch is closing in. Click those heels, Dorothy!".  Get the idea?

RunDisney encourages dressing up at their events, and a large percentage of runners do in fact wear something whimsical – be it mouse ears, sparkle skirts, or a full blown costume with accessories.

Here are some tips to keep in mind when dressing up for an event.
1.   For timed events, be they kids races, the 10K, 10-miler, half, or full marathon, comfort is key.  You can still express your creativity, but consider something a bit more pared down.  Do a test run (preferably the entire distance of your race) to make sure there are no wardrobe malfunctions: including chafing, tearing, flapping, excess noise or movement.  If it bothers you in the slightest: pin it up, stitch it down, or take it off.  Note: many things are fine on a short run, but can become miserable at ten plus miles.  Avoid surprises and test it out.  If DG can run up and down our street dressed as a Space Ranger, you can do the same.  It frightens delights the neighborhood kids and will result in calls to the po-po reporting suspicious behavior make you lots of new friends.  Trust me on this.


2. For 5K runDisney events, you can be a little more fanciful.  These un-timed events are walker-friendly, so if your costume is a bit too elaborate, cumbersome, or just too hot to wear for a longer distance, the 5K might be just the thing to showcase it.  We have a friend that did a runDisney 5K as Miss Piggy and walked it in HEELS!  I've seen a blogger than ran/walked another runDisney 5K in a full skirted wedding gown.  Anything is possible!  Of course, if you are really hardcore, like these London marathoners, then go for broke.

3.   If you are running with a group (family or friends), how about a common theme?  The Incredibles are a popular choice for parents with kids.  How about the whole cast of characters from Finding Nemo?  Or a group of identically dressed Minnies? If you want to really cause a stir, recruit 35 of your runner BFFs and run the full marathon tied together.  See the Guinness World Record set by Sir Richard Branson's team: head butterfly followed by a giant caterpillar at London 2010.  (In fact, the London Marathon is known for wacky world record attempts – so why not try train for one?)

4.   While runDisney does encourage costumes, it does place the restriction that masks are not to be worn.  Be creative, but for safety's sake in such a big crowd, keep your vision unrestricted. And you don’t want to cover up any part of your happy face anyway!

5.   Take care that your bib is clearly visible, and up front.  Be certain your costume does not conceal, move around, or otherwise interfere with that number.  Not only are runDisney timing chips embedded in your bib, the official photographers tag all of their images with your number. You will be grateful that bib was easy to see when you don’t have to sift through potentially thousands of ‘unidentified photos’ trying to find your one Castle shot.

6.   Finally, be mindful of other runners, especially smaller children.  If you have a long skirt, large pointy wings, or are carrying a basket, fairy wand, or other accessory, keep an eye out around you.  The same holds true for small items that might fall off your costume.  Remember that test run?  Double and triple check that everything is secure.  You don't want someone to trip over a tentacle from your Ursula costume, nor do you want an arrow from your Merida costume to stab a runner that was accidentally shoved into you.  Seriously, ouch.

Now, you decide to dress up but still need costume ideas.  These are some outfits we have worn during races.  Inspiration for some came from pinterest, and other from items we already owned that could be accessorized into a costume.


DG: Tee by Hanes, vest made by cutting up an old black t-shirt, shorts from Old Navy, Goofy hat available at Disney Parks, pouch with bib holder from One More Mile, Feetures socks, ASICS shoes
DB: Tee by Hanes Her Way, White petticoat layered over a white tutu (from lingerie shop), Tights (in Gold) from EastBay, Daisy Duck hat (vintage, from ebay; embellished with a bow  made from pink felt and stuffed with polyfil) pink crew socks by Injinji, Brooks Defyance 5 shoes 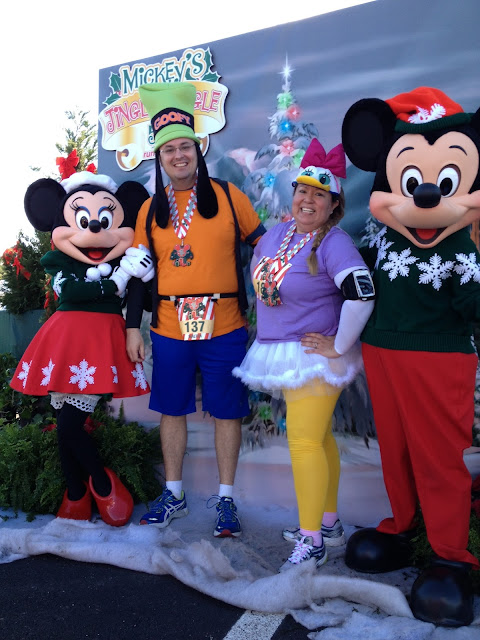 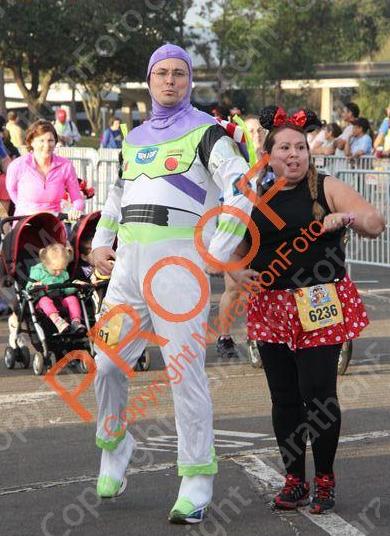 Princess Half Marathon, Walt Disney World, February 2013 - This was our first long-distance event, so DG vetoed actual costumes.  Instead we dressed as what else: but a Disney Bride and Groom.  We had our blog and twitter names printed on the back of our shirts.  It was nice because a few runners recognized the names on the course and said "Hey DisneyBride! I'm 'so and so' on twitter." 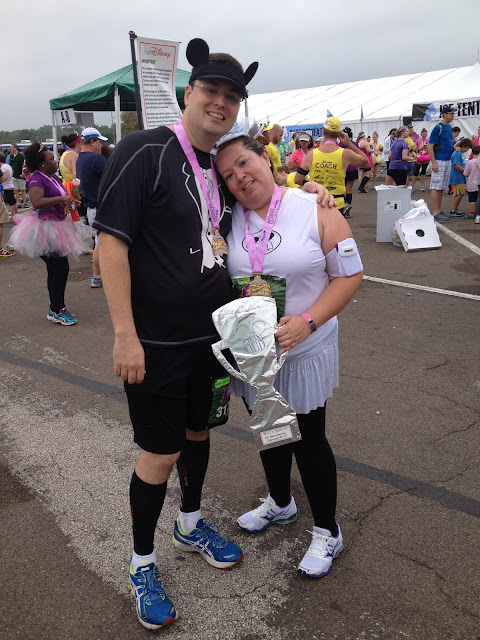 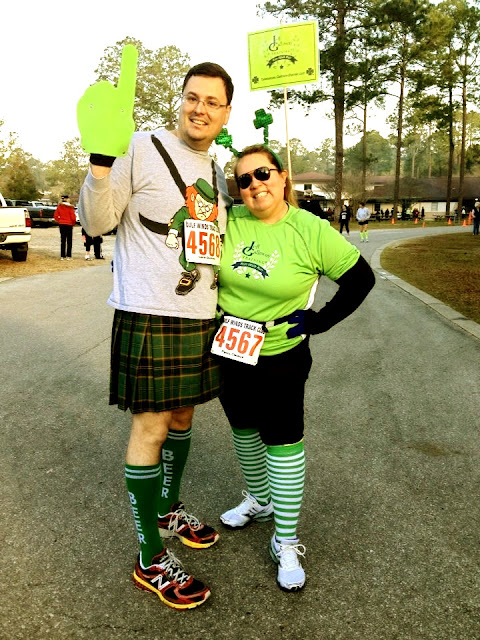 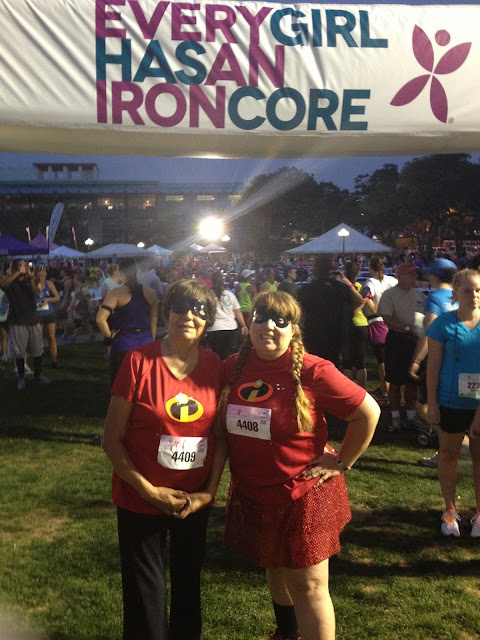 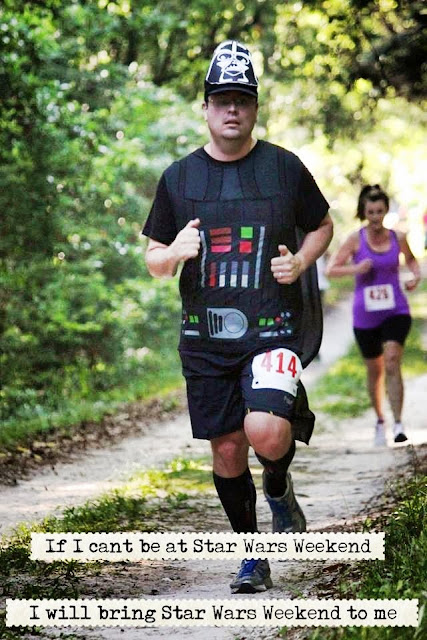 Still need ideas? Check out my Pinterest board: http://www.pinterest.com/runningdisney/running-happily-ever-after/


Kelly from Team-Sparkle.com has a great costume guide for Disney lovers.  Do a web search of photos for Disney races, and dozens of great costumes will pop up.  Or start with a Halloween costume search and narrow it down to something you could wear while running.  Costumes are arguably my favorite part of a runDisney race.  During the Princess Half, I was smiling and enjoying the outfits all morning.  Particular amusing was that considering the relatively small number of men that ran that day, a not-insignificant percentage ran in drag - as Ariel, Snow White, Minnie, Merida, Jasmine, Tink, and others.